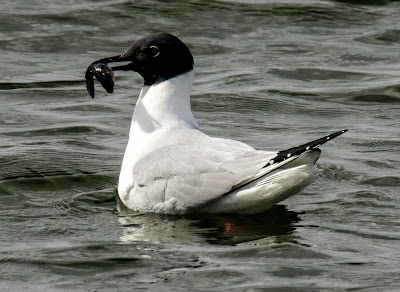 I knew I had to break isolation today, I've been thinking about it for weeks.  I had to go to the post office, it is tax day, April 15th and yes, the tax man waits for no man, virus or not.  Now many of you know that payments for taxes have been delayed, but not the actual filing, and yes, I could have filed extensions and I in fact did, but at some point I was still going to have to mail a bunch of tax forms to multiple places and so at some point I was going to have to venture outside and into the wilds of they say and chance the Beast.  Even extensions cost 50 cents to mail and I may need that money.

It shouldn't be so complicated to go to the post office, but alas....no.  Yesterday I schemed, where are some of the lowest volume post offices in the area?  Which counties have no cases of COVID-19?  How far should I drive?  I looked at all of these variables and others to determine where I was going to least likely encounter the bug and settled upon....Grenville, South Dakota, where I happened to be thinking about in my last blog--population 54.  The postmaster had NOT seen a customer since Monday and averages only about 5 a day.  They are open 10 AM until 2 PM, and it has even less than 20 PO boxes in a different room so, I decided that was my ticket and away I drove up towards my cabin to mail my taxes this morning in a almost forgotten spot in the middle of the Coteau des Prairies.

Walking in, masked up, literally holding a rag of bleach in my hand, seemed to be a scene from some dark movie, somewhere.  Was Terminator going to get me?  I opened the two doors, which I should have included in my screening of "COVID safe" post offices, scrubbed the small dest with bleach and then alcohol, and started writing out certified mail orders and return reciepts.  The poor lonely post master, seemed healthy enough and it took about 30 minutes but we got through it all.  I was a little unnerved because even here, a plexiglass shield had been installed between me and the lady, if I stood right in the middle.  To think of that out here, isolated that we are, is a bit daunting and worth hesitating and thinking about it.  COVID-19 is going to get everywhere and kill whatever it wants, I fear, no matter what we try.  I am probably delaying the inevitable, but I guess, that is what I have to try to do.  I succeeded in getting the coveted April 15th postmark and after a full disinfection back in my truck with everything I had with short of fire, and on the way home, I looked for birds, since I was already out and about.

It has been a brutal and cold spring, just awful, we've had snow for the last few days, it has blown like it almost never blows up here--hard and furious well over 30 mph on most days recently and its been cold, today, the sun was trying to come out but still my truck thermometer said 28 degrees at noon, spring has not sprung, maybe it won't and we get to choose between starvation and COVID, some choice.

The ponds have refrozen over after getting the ice blown off by the wind and on many, the only open water were small holes kept open by pied billed grebes trying not to freeze in.  Some were looking in a bit of a perilous state 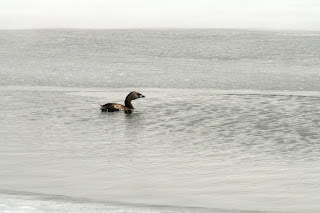 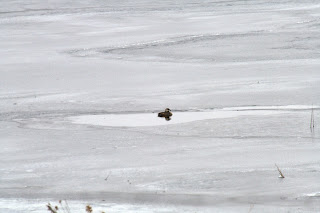 I have never seen blue-winged teals walk on ice before (geese and mallards all the time) as usually, being smarter than most of the prairie pothole waterfowl, they come in later, but not this year, the ice is hanging on late and they have arrived in the last few to days to this.  I had never seen a duck slip and fall on the ice before today either.  It is a year of firsts
The water on Waubay Lake in Grenville is at road level.  With the heavy wind and waves breaking over the road last few days, dead carp have frozen and been left stranded on the road and the place has becaome a buffet for lucky gulls.  I saw five species, Franklin's, and ring-billeds, plus uncommon gulls in these parts, Bonepart's Herring and even a few California gulls were out eating carp.
You see such strange views around Waubay Lake
So that was today's outing, now I just have to wait two more weeks to see if the virus found me and wants to take me out, such is the life we have to deal with now in America and everywhere.  In the middle of this, the government thinks people will instantly want to go to restaurants and get onto a plane, shop and go to DisneyWorld and it will be business as usual...That ship, I fear sailed a month ago.  I'm not flying until we get a vaccine and I hope, sincerely hope, someone is working hard on that, instead of fake news, press conferences that say nothing, and "generous" donation of ventilators that haven't been made yet, let us see the vaccine makers.  As far as purchasing anything, like a car, a boat, even clothing....sorry, I ordered a part for something in the house last week, they say it will come in June....yea, luckily it isn't a part for the furnace, cause that is running hard.  Hey it will make it to 31 at our cabin today my Iphone says....but I digress.

So there I am, patiently waiting for the viral scurge to arrive to the flyover country of Northeastern South Dakota and I wait for spring.  Only God knows which one will arrive first. 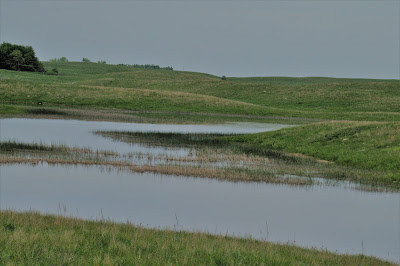