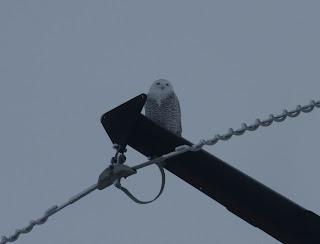 We were driving home from Florida and I got a message from Barry Parkin of Aberdeen, SD that there was a Project Snowstorm Snowy in my area.  Unfortunately, we were still in Missouri, and that evening when we were home, we had to hustle off to Wisconsin to start our Christmas celebration.  I wasn't even sure what Project Snowstorm was, I had assumed he was talking about the weather.

Barry resent me a pin location on the 23rd, so deciding that a 60 mile drive was better than a 500 mile drive up to NW Minnesota to get my year owl, it was then he sent me a link. This owl I was chasing even had a name..."Pearl"

Pearl is a two-year-old female snowy owl, trapped Nov. 27, 2019, near Woodworth, ND by Matt Solensky of the U.S. Geological Survey’s Northern Prairie Research Center,and named for nearby Pearl Lake. Her transmitter was funded by generous donations from the public.  It had made a bee-line for my ranch right after it was tagged.

The grey dot is my ranch, it spent December 12th on my property. 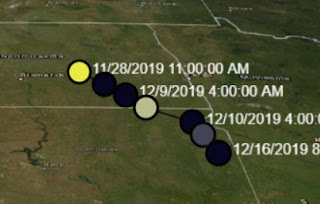 So, I went owl hunting.  I struck out on the 23rd.  My daily tally, a kestrel and 12 horned larks driving 40 miles up on the Coteau, the Coteau des Prairie is a barren, windswept, lifeless place this time of year.  Back at my house I was pleased to say.  "I've got siskins!"  Always a nice, albeit transient bunch of birds.

Including this one with something weird going on with it's beak. 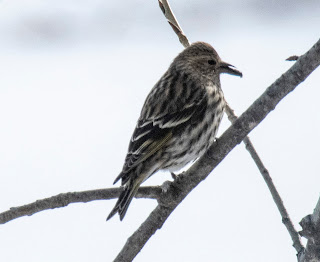 I got going earlier on Christmas eve, it is better to look for snowy owls at first light.  I was going to have a Christmas owl if it killed me, so in the fog, off I went to usually where it is the foggiest place in South Dakota, but oddly today, it was the clearest, well, it was till gray and a bit foggy.  At least around here, it was about as good as it could be.

I climbed up on the Coteau, drove around, I met up with a coyote hunter.  He told me a cryptic tale of his son having been seeing snowy owls around as he worked nearby.  It wasn't a hot tip so we parted ways.  I flushed, of all things a greater prairie chicken, no small find itself, at least up here.  There are a few occasionally around.  I saw one ten years ago, thirty miles northwest of here.  Some birds are probably dispersing from Minnesota as they are known to disperse.  Tagged birds in Wisconsin dispersed hundreds of miles and they were known to even migrate back in the day.  This was just a single bird, and it flew in from the north.  I tried and failed to get a good picture.

Then three miles away, I tallied three crows on a carcass and three sharp-tailed grouse in a tree.  It was slow birding, but better than the day before and then I began to think.  Where could that guy's son even work?  I was in the middle of nowhere.  There isn't even a house on every six square miles.  A milk truck passed me as I was pulled off the side of the most major road in the area.  I looked at a starling, then it hit me.  A dairy!  There was a large dairy about a mile southwest of me.  Owls eat rats, dairies have rats.  Then I thought like an owl.  I've seen two snowy owls in trees, maybe 20 on fence posts.  One on a round bale, some on the ground, and on the ground with this snow would be nearly impossible to find, and a few on normal electrical poles.  The most I've seen in the Dakotas have been on the big transmission towers.  I could see way down behind me a new high transmission line, carrying power from a new windmill farm, the banes of the prairies, crossing the road behind me about two miles.  I stood out and followed it, wondering where it went.  I saw a mile south it turned and ran parallel of me heading west.  Most of the roads here are not passable in the winter, and are barely passable even in the summer.  No one plows them.  I drove down a mile past the dead end road that had the dairy on it and I found a pretty decent road and headed south.  I could see generally where the road was under the crusted snow and ice and crested a hill and could see the power line crossing ahead of me.

If I was an owl, I'd spend the day up there, hunt rats a mile over at night, and spend the day in solitude up on a tower.  Suddenly something big and white flew over ahead of my truck.  It was coming from the dairy.

It was Pearl.  It lit up on one of the towers and watched me watch it. 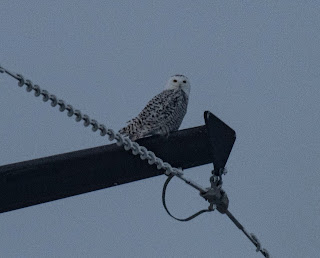 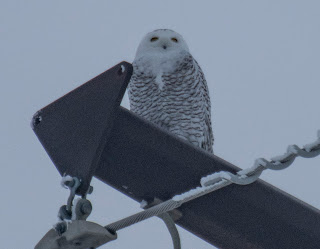 I had my Christmas Owl!

I left her where I found her, watching for voles and waiting for another after dark hunting raid on the diary.  She is providing valuable tracking data and hopefully having a good winter and staying off the roads so she can head back north in the spring and some year breed making more snowy owls.

So this is my present, thanks Pearl, all I want for Christmas ....is "you!"
My apologies to Mariah Carey
Merry Christmas Pearl and to all of you, it is time to go skating! 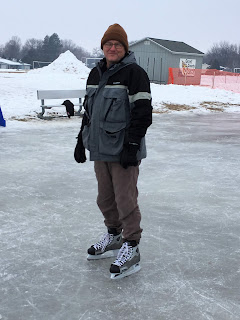 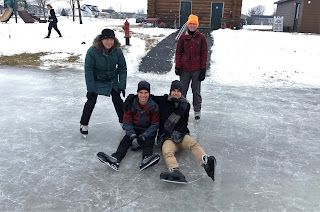