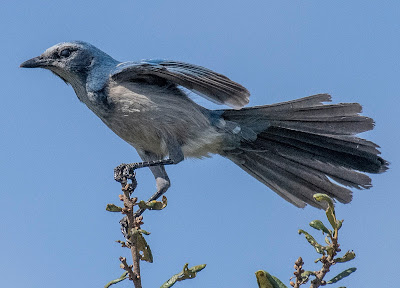 What is Olaf up to?  Well, I've been spending the last few weeks trying to save the monarch butterfly, one butterfly at a time.  My neighbors and me have spent a lot of money planting milk weed and trying to encourage and feed the caterpillars. We've saved caterpillars crossing the street, moved them when they've eaten up their plants and saved them from being tossed out with the pruners. This is the first caterpillar we've had hatch from an egg so far.  He is busily eating a leaf.  We'll see if they eat us out of house and home. 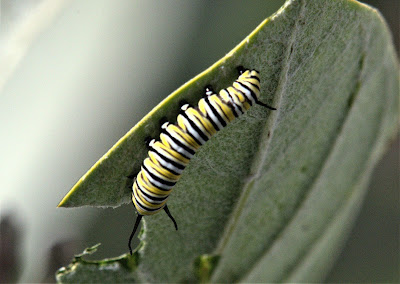 There were other lifer butterflies, this orange barred Sulphur for one. 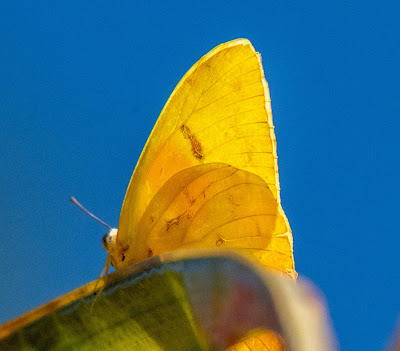 I went birding on the beach while visiting my sister in law, recently 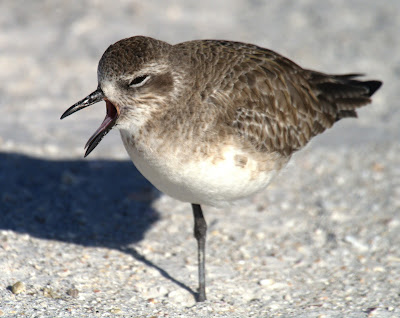 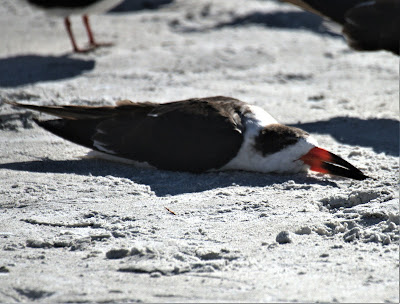 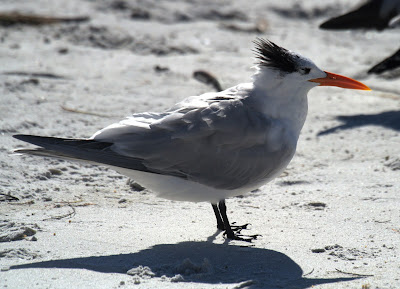 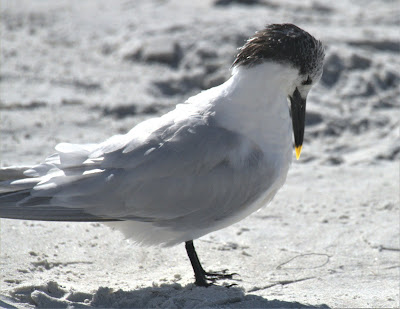 Sandwich terns being distracted, by....something
Back at my RV I have a cardinal living in my Tiki hut, and I even had yellow throated warblers at my bird feeder but we were feeling stuck and shut in, so we had to go do something. 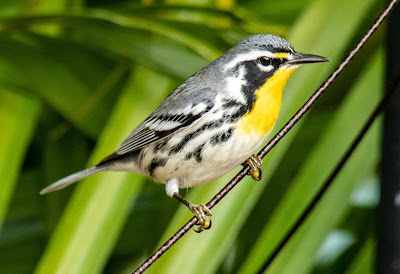 So today, with nothing better to do, I had to go birding, so I got Silja organized early and we headed out east this morning to check on the status of the Florida scrub-jay population at the Allen David Broussard Catfish Creek Preserve State Park, what I call the "Catfish Hole."  It is located out in Polk County Florida and has miles of very sandy trails and loaded with the endangered birds. My favorite spot to find them.

We hiked over two miles and found about 30 of the noisy buggers who found me and scolded me for just being there. I enjoyed a properly distanced talk with a horseback rider down in oaks and pines as well. 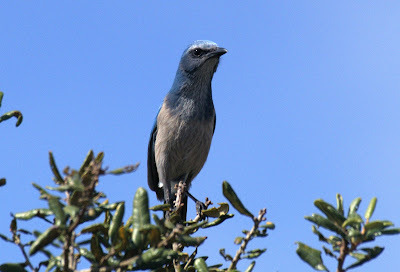 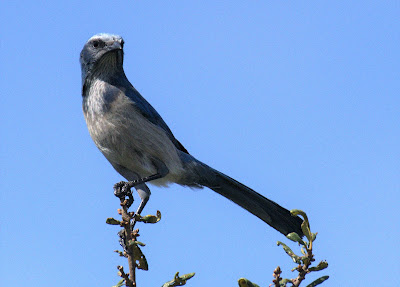 There were quite a few tufted titmice, eastern towhees, and a whole lot of Spanish Moss.  Nothing says the South more than Spanish moss. 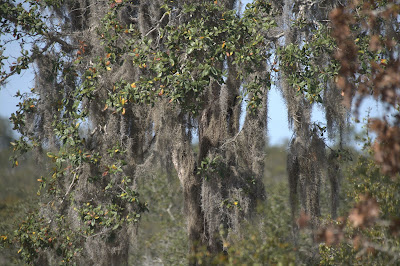 We were going to look for snail kites at a nearby lake but unfortunately there was an airboat fishing tournament and the lookout onto the lake was overrun with boat trailers.  We didn't bring our rods so we turned around and left to go get strawberry shakes in Plant City.
COVID be damned, I guess, we tried to go to Parkdale Strawberry farm but it was out of control with people everywhere so we didn't stop. No shake there.  People in Florida were everywhere in huge numbers, the wait at a Wendy's drive through was even 30 minutes, traffic was nuts. But we got frosties.  So we ended up back at the RV and in the pool.  Safety outside and the pool was nice.  I had to ID a bird on a woman's necklace.  A tropicbird in pure gold.  It was safe there though, as it seems we are being helped out by all of our neighbors who have all gotten their first (or second) COVID shot now.  Luckily, my parents up north and my son in Chicago were also vaccinated Thursday for their first dose as well.  We are still waiting our turn.  I'd volunteer to help give immunizations but where does a retired doctor even volunteer?  I never had a license in Florida so probably no where here.
The retired life.  One needs things to do. I guess I can just stay home and play with Gamestop stock.  I did spend all last week teaching my children about stock shorts and how the whole deal worked.  My son Allwin made a good amount on a trade.  He is getting a new coffee table with his new found fortune.  One of my investments, Weis Markets, the stodgy supermarket we shopped at back in 1994 in Pennsylvania was even caught up in a short squeeze...but to be honest, I didn't sell it and Friday is was back to where it was a week ago.  I guess birding is easier.
Birding....but even my little smidgeon of fame is now over.   My 2016 record for the lower 48 big year of 723 species, was broken last year by one bird, by Jeremy Dominquez of Ohio.  We are Facebook friends, but I've never birded with him nor met.  Congrats to him.  I was surprised it took four years to break.  I once wrote if I had spent all of my effort on the record, I could have gotten 740 birds and with the rules change this year on the checklist, that number would be closer to 750.  The Key west chicken I saw in November that year might have been countable even in 2016 due to this new interpretation of the rules which I saw back then but no matter....but whatever, I got other things to do now and time for another to hold that mantle and considering he did it in a COVID year, even more surprising and an accomplishment.  If I ever do that again, it would be for that record but life has moved on from that activity, so doubt that will ever happen.
Things to do.  Next week, I'm buying an RV site in Florida, working on a book, and going kayaking to catch something.  Not COVID!  I'm trying to catch a fish in a nearby lake and not a catfish....they have this record lunker bass that reportedly lives there and well, I have been challenged....Silja had a nice one on last week but it escaped unharmed.....SOMETHING TO DO!
Stay safe and warm out there, we're still hiding in Florida for a while, seeing birds, getting some sun, and staying out of trouble.
Olaf
at January 30, 2021 2 comments: