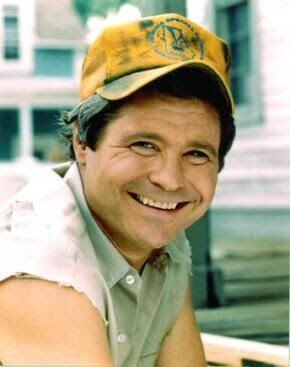 It's Valentines Day.  It is cold up north in the Dakotas and we're not up there, lucky us!  I'm down south as we have been for a month and being down south makes me think of my first "experience" with the south, Television.  "Cooter Davenport," was a character in the now quite politically incorrect series  Duke's of Hazzard.  He drove a tow truck, had on a well worn ball cap and dirty jeans, and spoke his mind in a southern country drawl, but never went to jail, unlike his two cousins, those Duke boys.  Quiz question:

The southern nickname "Cooter" comes from:

a) a southern slang term for a raccoon

c) a species of freshwater turtle

d) A breed of hunting dogs closely related to the Blue-tick hounds that are sometimes used to track deer and people.

While you are contemplating that, I've been busy doing everything down in Florida except birding.  I have been finishing off writing two books these past few weeks, and that seems to have consumed me. We watched the Super Bowl, and caught the fly-over of the B-1, B-2, and B-52, they went right over our lot.  That was cool!

We've been tending to our crop of Monarch caterpillars, we've planted milkweed and moving the little buggers from leaves to better leaves.  We have about twenty on the plants right now, a few are in their chrysalises (not a word I write much). 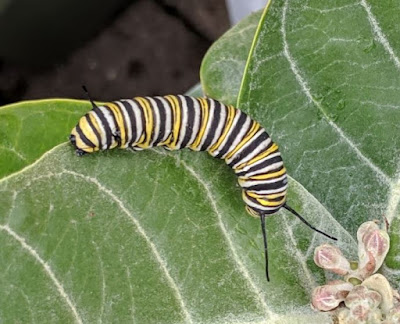 We are just doing our part to try to save the species, but they are hungry little buggers, eating us out of house and home, and striping our milkweed, which the local nursery is only too eager to sell us.
There are other butterflies, like this barred yellow... 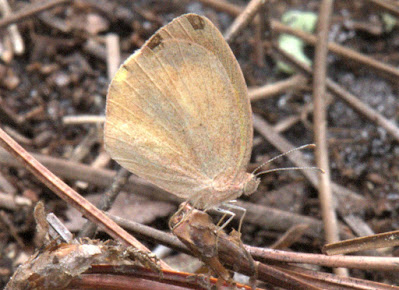 We also bought an RV lot. What is owning a piece of paradise worth, you say?  Looks to me like it costs $75,000..and I cannot tell you if we got value or taken.. .but it is a place to go, in Florida no less, and I guess campsites are not always easy to find where you want them.  I have buyers remorse now even buying a hamburger through the drive-though or even buying toilet paper, so it is hard to read this deal. There was no celebration even though we went to our neighbors and got quite drunk "celebrating" or "consoling" the purchase. Despite the hangover, we like our neighbors and the quite unusual community we have now spent a few winter months in, so all is well there.  We even have our own Tiki hut.  It is not out in the wilds, in fact, it doesn't even have grass, but it works.  The bar in the center has to go, though.  We need to get a shed, but that is another story. 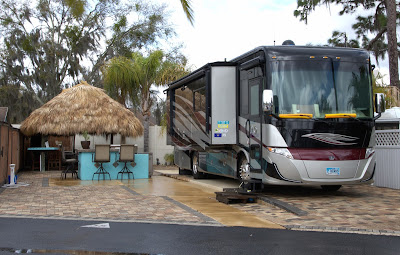 A male cardinal lives in the Tiki hut, too, who can say that?  We went canoeing on the the  Hillsboro River this week.  I got the worst case of boat butt ever, I could write a country song about this extreme boat butt I had, ala Garth Brooks, or Zac Brown but other than that, it was a good time.  Besides the usual birds, we saw out FOY (first of year) alligators, there was no problem finding them, they were all over.  I could of hit the paddle on their snouts if I liked. 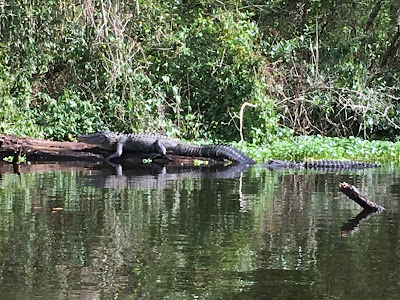 So that gets us to the Cooter Davenport answer.  The word "cooter" is not on Microsoft's spellcheck either despite it being a word, so it works in Scrabble.  Cooters are turtles about 7-10 species of which (depending on taxonomy) live in North America.  I am not sure if that is why they picked this name for the character.
The Hillsboro River had cooters, lots of cooters.......Florida or Coastal plains cooters 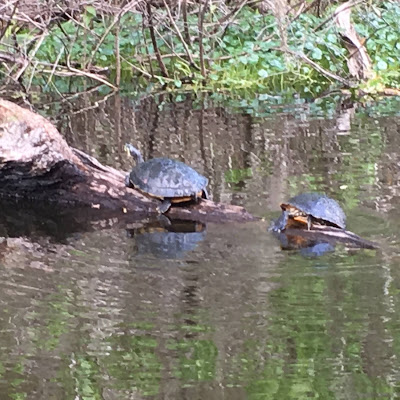 Then we went walking in Pasco County today and saw another species of cooter, the Peninsular cooter walking in the woods.  It was a cooter two-fer for the week so to speak, and a lifer turtle. 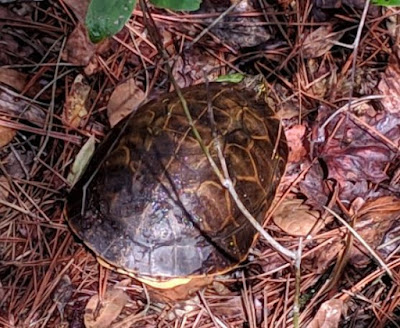 Ben Jones, the man who played Cooter, was elected a Democratic Congressman from Georgia but after two terms was redistricted in 1992 and faced and lost to Newt Gingrich, now 80, he is a man from a different era and along with the other cast, from a story that isn't even shown in reruns now due to sensitivities.
Living in the South, is different, and even for us as temporary that it is, makes one shake their heads some times or almost all the time. Each day is different, Life here is going on, COVID is well, not front and center.  Most of our friends down here have been immunized for the plague unlike my poor mother-in-law which at 83 seems to not be a priority for Minnesota to find her an immunization. Which seems odd thinking that Minnesota is everything Florida is not, yet, they can't get immunizations going up north.  I need my shots but waiting impatiently.  I assume I will get fired up to go bird, but today, I'm just enjoying the warmth, the love of my life--Silja on a very special day, and southern turtles.  Cooter is a cool name, despite the past association with a car painted with politically incorrect insignias and an even cooler turtle.
Maybe I'll go birding next week....
or maybe not
Olaf