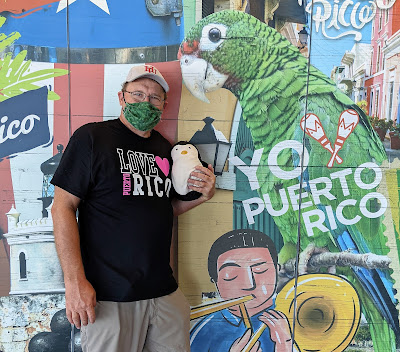 I just got done with a birding adventure that was so good, the group wrote a song about it, and not to the tune of "Despecito," we chose Ricky Martin, "La vida loca"  I will get to this later in the blog....despacito, take it slowly, passionately.....

After a nearly two year hiatus from COVID, my island endemic project continued on what should be an American state...Puerto Rico, where 17 island endemics waited my viewing and an unknown total of butterflies including.....a really really rare one, so rare it makes my local Dakota skippers look common.

We teamed up with 5 other birders, really nice people, three from Michigan, one from Boulder, and another from Youngstown Ohio.  This was a normal "Wildside Tour" with Gabriel Lugo as a guide.  A man I once met in a parking lot at Estero in South Texas, in the small field of birding.  I got his name from another birder I picked up from the side of the road near Nome on birding trips past.  That birder from South Florida remains a Facebook friend.

The trip was a bit punishing for the non-driven birder (no beach, no pool, no nightclubs, the bed was one's guilty pleasure after night birding, but with good to great food, great sights, good lodging and a great group, heck, and being bored to death from COVID, and sitting in our RV after a second year of having a Bhutan trip postponed, it was a good time to go birding and a great time to get Puerto Rican birds.  The trip had two spots left in November when I got the urge and Silja came too!

We had a safe trip.  The mountains on the island are great.  Things look back to normal post Irma, maybe more back to normal than we are from our lost house.  The villages are more fun than San Juan.

Puerto Rico seemed a friendly place, but one somewhere stuck between the US and whatever it is.  They are metric, mile markers in Kilometers, gas in Liters, but drinks in ounces, and the speed limit signs are in MPH.  They drive on the right, unlike St Thomas USVI drives on the left for some reason.  They have the US Post office, US Dollar, and it all appears American and despite this being a long ways from Florida, oddly, Diesel is $0.75 a gallon (well it is $0.73 a liter) cheaper here than Florida, heck it is cheaper here than Oklahoma.  It is the cheapest Diesel in America.  Where do they get it?  Gasoline is a little more than Florida prices and above diesel.  I am still bewildered, with all the EPA mandates in America, it looks like they sell old fashioned high Sulphur diesel here, which is used to power mostly old trucks.  There were a couple new Volvo trucks on the road.
The roads are narrow and in places, full of pot holes...the Eighties were calling and wanted their roads back.  Parking is sort of on faith as is meeting other cars. Gabriel only had to move in his side mirrors once.  Roads on state trunk roads flood out due to lack of ditching, when we had heavy rain where, "This is the dry side of the island." We drove through water the Weather Channel says to never do. Traffic is crazy in the towns but it seems to work.  They even sell Ice cream out of trunks of cars that drive around with their trucks open and prices written on the underside of the lids.  Other cars are decked out with full speakers in open trucks, blasting us with a Puerto Rican beat, sort of hip-hop meets a Latin beat.  The school buses have been privatized, so many of the buses are painted up with Latin flair.
They also have a great chain restaurant here, Meson Sandwiches, it is almost too good to work in America, though.  There is one in Orlando.  Toll roads abound here.  They are pretty COVID cautious, few if any mask objectors and the vaccination rates here are very very high. 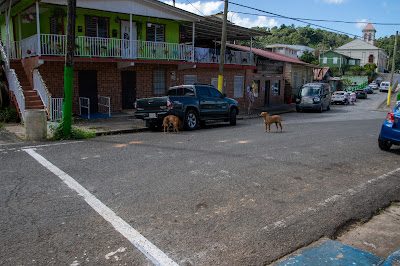 The place does not appear perfectly set to do it yourself.  The Parrot especially is not inviting to just a random walk to get the bird as it hangs near the rehab center and it is not very inviting to birders. 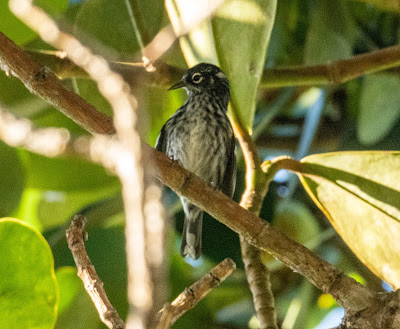 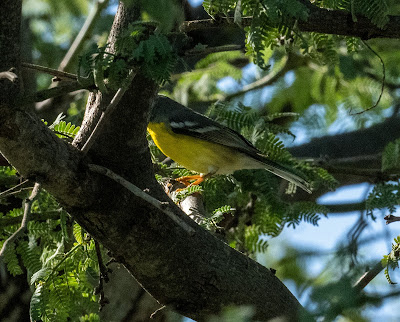 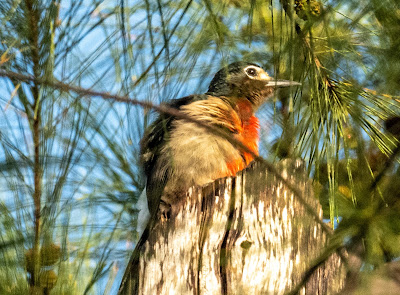 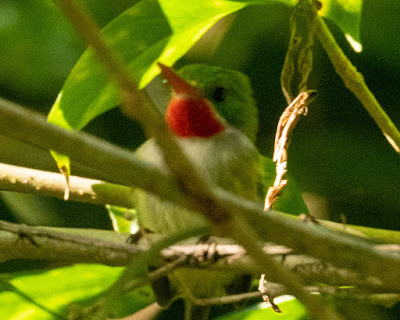 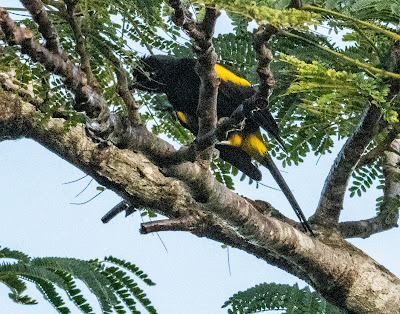 There is a lot more yellow on that bird than it looks from this view.  This is the only one we saw, for reasons unknown.  On this and the Puerto Rican Flycatcher, another bird, we saw once or twice, it was good I got photos 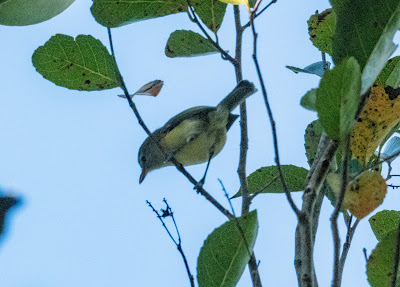 #16 Puerto Rican Bullfinch, we played peekaboo with this bird the whole time here.  A handsome finch, that just did not want to come out and be photographed. 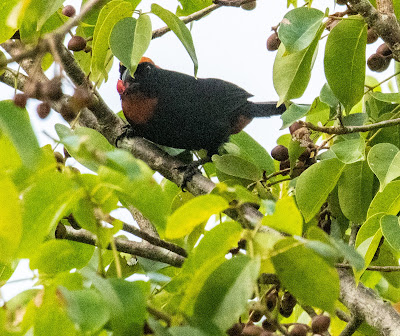 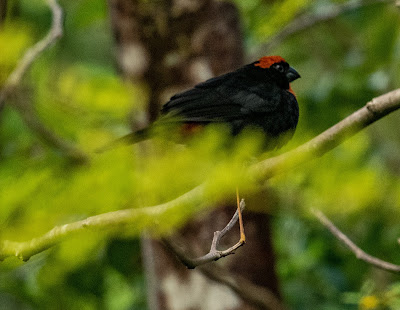 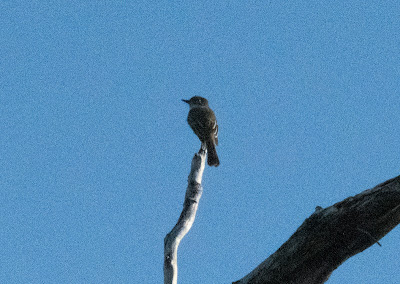 There were also a few non-island-only endemics that I needed which would be considered more West Indian endemics
That made 22 lifers for the trip, as in birds I have never seen before.  about 110 species overall.  I saw an exotic to the island, an Indian silverbill, what one does with that, IDK.
Then there were birds that I have seen before that will make additions when Puerto Rico is added to the "US/ ABA re-revised List," especially as I believe this should be a state.  Why Hawaii and not Puerto Rico?"  The ABA is having their conference here next year.....so I am padding my PR numbers.  You heard it here first.

There was also a Crested Antillean Hummingbird, which I only half-heartedly put a camera on and got a blurry vision of a cool hummer, I have photographed many times before in St. Martin.
Then there are the introduced birds....would they count on an ABA Puerto Rican 51st state kind of list? 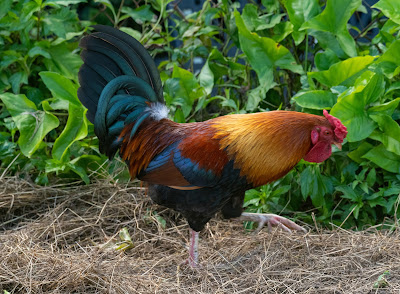 The rooster was heading towards this handsome fellow.  He was also watching me watch this chicken, possibly, HIS chicken.  There were feral or semi feral cats all over the island.
THE BUTTERFLIES 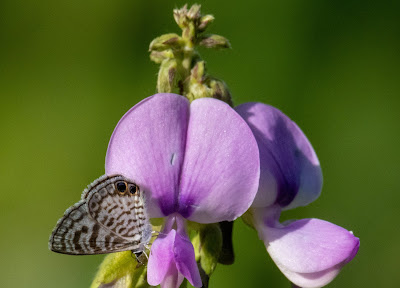 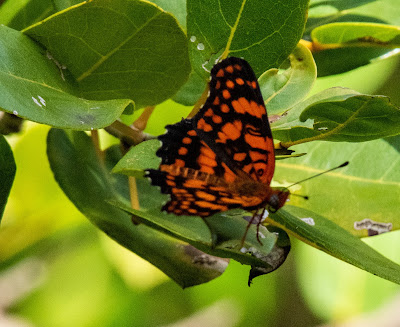 Wow, the goal bug of butterfly hunters everywhere, the Puerto Rican Harlequin.  I saw two of them at two sites!  This butterfly was down to a census of 70 individuals estimated, 25 years ago.  Why it declined is unknown.  It has plenty of food plants.  This insect might not outlive me as a species, sadly.  I wanted to see one, and, Gabriel found them.
, 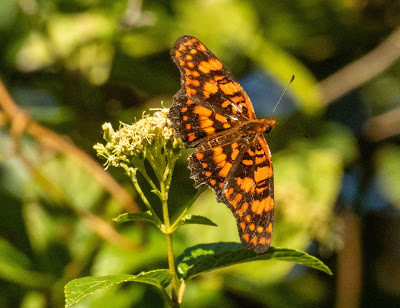 A trip with a theme song.....if I could only sing
Thanks to all for a great trip, and I apologize for my photographic shortcomings..
Viva Puerto Rico but Despacito.....take it slowly
come and enjoy the island of Puerto Rico
Olaf