I have never seen a deceit or possibly a brace of Wilson's Plovers (who gives out these names for groups of birds?  We will get to that).  I have only seen one or two birds at a time, and even at that I have only recorded 9 different sightings of this bird named after Alexander Wilson, whom never saw the species (was documented by George Ord from Cape May in early 1800s).  Of my nine sightings, three have occurred on St Martin, where a pair nested near the salt marsh behind the resort I frequented, but did not find every year.  Today, though this bird was hanging around the east end of Fort DeSoto Park in spades...were there 30, definitely, could there have been a hundred, possibly, they were sitting, feeding, snoozing, and one even took a bite out of a sanderling for offenses not apparent, maybe for just being too pale or something. 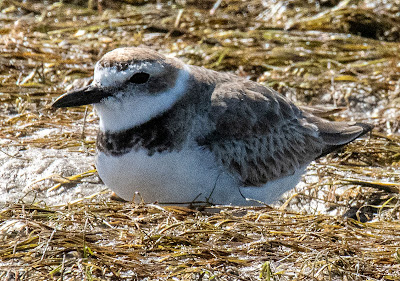 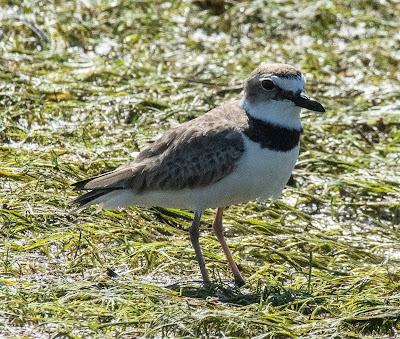 My wife went off to see manatees and I figured it was a good day for me to go birding, so off I went, being too lazy to get up at 4am to head north to see the flamingo.  DeSoto was a more manageable drive.
Wilson's plovers are interesting birds, and possibly a bird in some trouble over disturbing their beach habitat.  One source estimates on 22,000 breeding pairs internationally, and less that 9,000 pairs in the USA.  Maybe only 2-3 times the totals of Florida scrub jays for comparison.  People, dogs, and the dreaded peregrines are also listed as culprits.
Their large beaks make them good at fiddler crab feeders and they are rarely if ever found inland and away from beaches.  I have seen them on one of the access waterways nearby to South Padre but that area looks like a salt marsh, so it was not that much of a surprise. 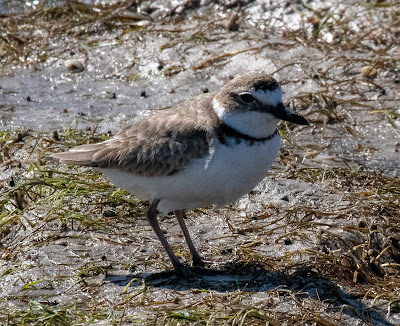 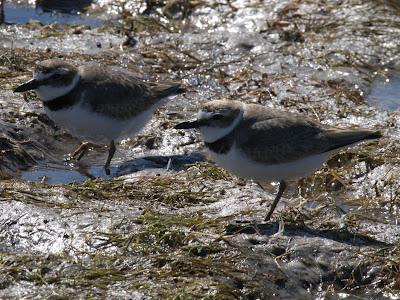 I have no real agenda for this blog, just enjoying a day out from our COVID hibernation in Lutz, Florida.  What does one do?  DeSoto is a safe outing and with all of these plovers, a lucky bonus.
The only other plover around were a few semipalmated plovers, smaller beaks, with a little orange on them.  They are about the same size. 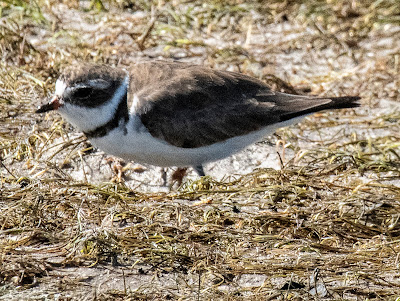 The end of land here was not very busy, it was cool and windy, good for birders, no so for bathers.  I started at the north end where I usually find Nanday parakeets and I was not disappointed, but I'm not photographing them unless I get something good, now.  I think this is now the most reliable spot for these guys.  They are always near the parking lot here in the mornings.
DeSoto Park is a place where apparently the Mottled ducks (and there was just a pair) are suspect, as on eBird Mottled ducks are rare and mallard/ mottled are NOT.  This looked like a mottled duck drake to me.  I looked at other reports from there and there are thousands......so was I over thinking this to mark it as mottled/mallard or was I lazy, as I did not have to write a description? 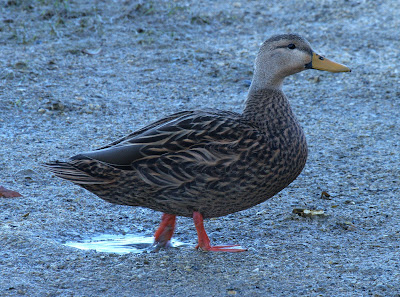 the hen was nearby 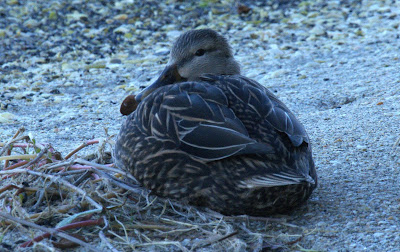 Also  nearby was a pair of redheads, which had attracted the attention of two guys with large cameras 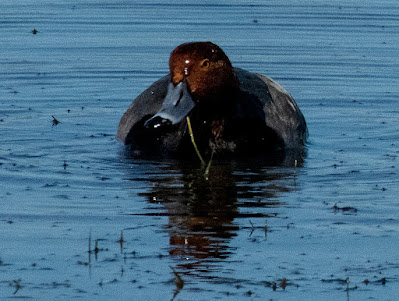 Redhead is not a "rare duck" here 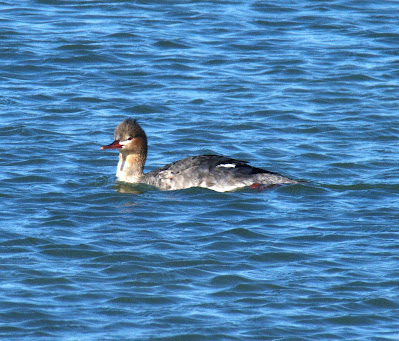 The small flock of red breasted mergansers was much more interesting to me, but no one save me with a large camera, cared.
I had actually came here to get my year reddish egret 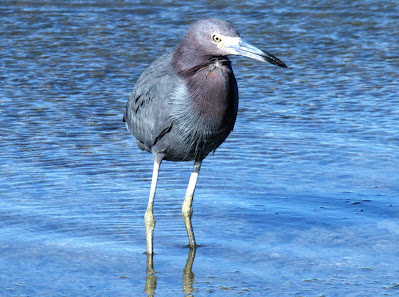 No one cared about him.  My friend Barry says the redheads are already up north, so big deal, I guess. 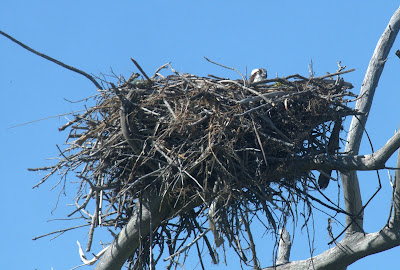 I saw a group of tripods, people with hand held cameras in the distance, being the skua birder I walked over and looked and looked at what rarity they were on, no one talked, no one seemed even remotely friendly, and all I was seeing was this osprey in her nest, but then I figured out the stakeout was FOR this osprey.  I wandered away to photograph a white peacock butterfly, then more butterflies before I drove back to the RV after a trip to the post office. 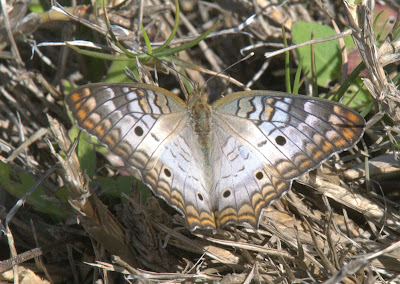 then a monk skipper 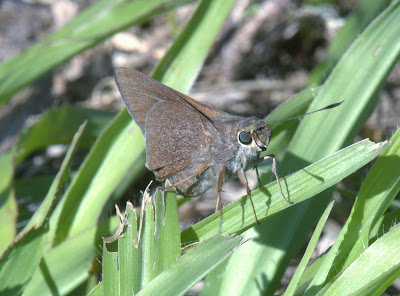 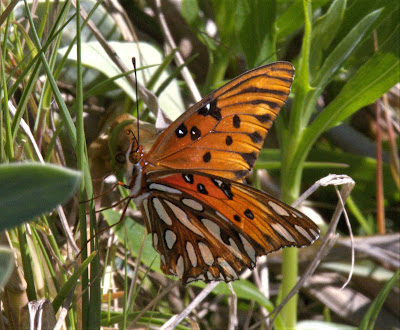 Gulf fritillary
The migrant passerines are a month away from here, but it was a pleasant morning outing and worth the ten bucks of tolls and the admission.  What is the value of seeing a deceit of plovers?  More then 10 bucks IMHO.
A "deceit" of plovers...It comes from a 1486 book of venery of St Albans and from the northern lapwing's broken wing routine, and also used for plovers which, not to be outdone by their larger cousins, can perform the hoax very well themselves, maybe better, but today, they were just eating and scurrying away from Olaf, the birder. Such a pejorative description of many majestic birds.
The Alexander Wilson's plover...as I've said before see them while you can, because the future is unknown, both from COVID, sudden illness, and habitat destruction.
Stay safe out there
Olaf