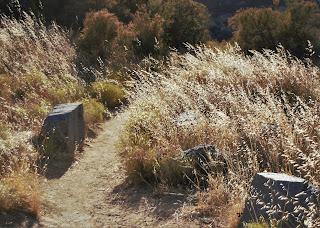 The PCT was designated as a scenic hiking trail way back in 1968, and spans 2569 miles from north to south along the western states.  The trail is one of the best unkept secrets in North America and it is something to personally behold.  In walking along the PCT the contrasts are stunning, they stunned me--from snow covered volcanoes to harsh mountain deserts, it can be 20 degrees or 120 degrees.  There are a lot of views to jar the senses. You may be shocked to see people wearing full wet gear in the Pacific northwest or the rampant nudity, with people wearing nothing at and around Deep Creek Hot Springs north of San Bernadino.  You will see some of the cleanest hikers there but at other places you will see hikers so filthy, and in such threadbare clothing at either end, it will make you laugh.

My favorite juxtaposition was the gorgeous blooming rhododendrons at the base of Mt Hood, in Oregon and then a mere hundred feet away a man in a Volvo plastered with save the earth bumper stickers and stop global warming slogans, was burning a couch. Yes, burning a couch with I'm sure at least 5 types of toxic gasses being formed, how much of a carbon foot print is it to burn a sofa?.

Ah, it is such a trail, a trail of dreams.  In my hikes, I've tallied no less than 4 lifers on this trail, Vaux's swift in Oregon, white throated swifts at Deep Creek Hot Springs and black-chinned sparrows and mountain quail near San Diego.  I've seen American dippers near to Los Angeles while canvasbacks swam in the same view.  This year, my gray vireo came near the trail and my best shots of Lawrence's goldfinches came a short walking distance off the trail, in a nutshell it is something everyone should behold. 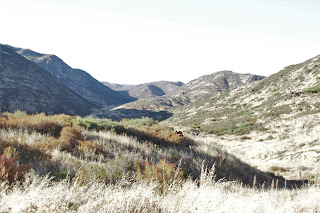 I came here for a reason, well there is no bears here, for a start.  I like birding here, and love the peace and freedom of this trail, wear what I want, go at my pace, just sit and enjoy the space and the view.  I like the solitude, and I wanted to actually see a California quail, I had only heard them this year, and I wanted photos of mountain quail and black chinned sparrows, both late birds to my life list and ones I wanted to be able to re-find just for the sport of it.  I like going to a patch of stuff and have a hunt bird, and today I had three.  The California quail proved the most difficult. 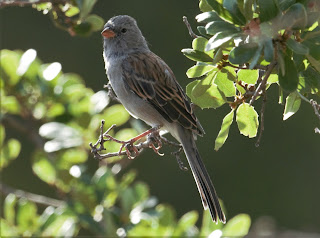 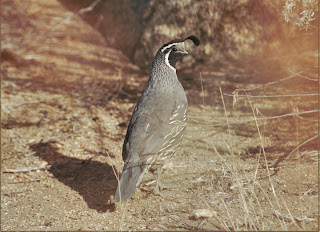 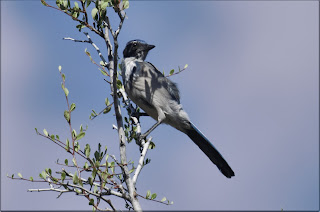 My first photo of the bird as a new species! 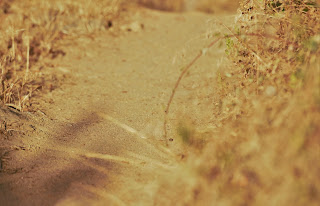 Okay, I missed it, you'd think with 9 total mtn quail seen around the trail, on one day and three the next, I could have photographed one?  Photographing quail is tough, really tough.  Just seeing mountain quail involves patience, luck, and maybe skill but I can find them, I just flush them before I can photograph them or they won't come out of the brush.

Getting the California Quail photographed was a challenge and I saw about 50. 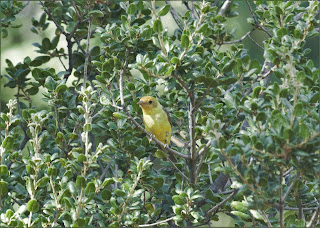 Okay, now I am getting on my soap box a bit.  Just up Kitchen Creek Road is a very nice National Forest Campground and here we are, less than 2 hours from 20 million people and the campground has 2 campers today, one of which looks like he or she just lives here.  Really?  At $14 a day, the cost to stay here an entire month is less than two nights hotel in Monterrey.  The place has water, views, trails, and shade, and BIRDS....what gives?

This is the problem with America.  Our government says our economy will improve when the consumers start spending more money, I believe the problem is that we are spending too much money and we need to learn that less..is more.  This place should be full.  I was just in the Bay area, The Bay area?  I can't even afford to live there.  1 million a house?  You can't cap rate a 1 million house, the rent would need to be $10 K a month, I can't afford that, so things are skewed. You need to be worth 5 to ten million to afford a house there minimum and the payments, do janitors make 150 a year?  Will 150K a year be enough?  Who can live in San Fran?  Either there are tons of rich people out there and /or something is about to explode as the math...it doesn't work.

But everyone can afford to come here, to the southern PCT.  and I mean everyone, even birders....

Heck, I hear all the time people need the mountain quail and the black chinned sparrow, maybe even the gray vireo, this place has them.  So I'm putting my time and money where my mouth is...unlike others who are trying to promote a faux cause....Olaf is promoting birding on a budget and to show off a marvelous hidden gem of America.

Next year I'd even be willing to lead a group, maybe pay me $100 bucks each for the week for expense. We'd camp and have a good time.  It takes a bit of patience to get the quail, morning and evening walks.  We could have day trips into San Diego to a trail I know that has all the local birds like gnatcatcher, munia, Bell's sparrow, etc.  It took me 30 minutes for the whole selection this spring.  Ridgeway's rail is easy on another trip, even the same day.  There is a great hot springs/ spa near this trailhead that well once you get the shock of body exposure out of the way you might make you even feel comfortable going to the optional non-clothing optional beach day in San Diego, it is gorgeous at Black's. I'm bringing my wife and it would be fun, so come on birding with Olaf on the cheap, where else would you get such an opportunity?  I kid you not, great birds and enjoyment of the great outdoors, if I could share the PCT and the hills above San Diego, with just one person and get them some lifer birds it would be worth it for me.  Or...pay a guide a lot of money, whatever....I love birding San Diego so much I'm willing to basically give away my time.

That is what my big year is about....I'm doing it for the birds and to get people out here and seeing the birds if I have to come with, so be it.

Now...my other pet peeve....since I'm on a roll, might as well get them all out in the open 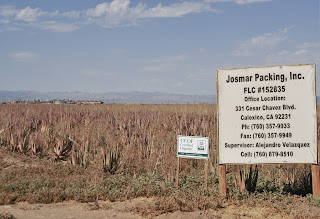 The Salton Sea, the place brings tears to my eyes...literally, they burn from the toxins....that is certified organic, (picture) note in the background, the large desalination plant, the smell where I'm standing is a cross between salt march at low tide and being down wind from a week old herd of dead cows.  You can't photo smells.  Behind the sign, they are drilling a gas well to power the desalination plant that makes the water to make your "organic" plants....is this really organic?  Do you care when you buy this stuff at Whole Foods or your co-op, do you feel good about yourself?  ..

Okay, what is the rest of this environmentally killing operation making ?  HAY!   Hay to feed cows and in my house, I can't give hay away and you water the desert because the government pays the Hay Kings to do it and through a loop hole in the milk pricing formula....all in a state with supposed severe water restrictions.....the %%&^% school 15 miles from the site has manicured green lawn, all in Imperial County, the poorest in the state????   The Hay Baron in that town has a lake in his front yard and planted palm trees.....all because he is supported by our government to legally exploit this valley.......enough rant.  Where is the Sierra Club?  This is what needs to stop, let the rivers run, and grow the food where it can be supported by natural climate. 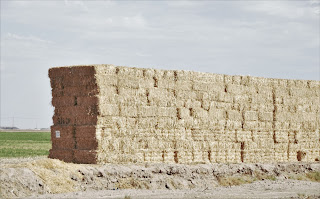 BTW, there were no yellow-footed gulls on the sea this visit, but eared grebes, cormorants, and lots of shorebirds in the toxic soup.  It has been 120 here, but it was maybe just 105 today, the sea was down 5 feet from last time and the rock where my lifer blue footed booby in 2013 is now totally out of the water....Yikes! 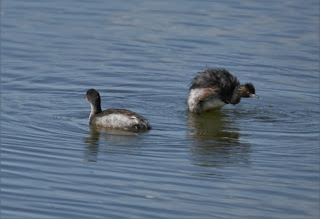 Well there is my update, in San Diego....no year birds but still I love birding here and that is what this is about and readers....my invitation awaits..