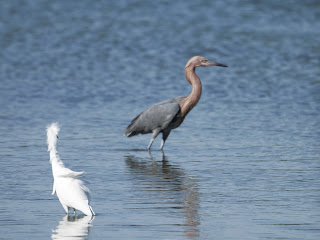 Well, I went on my second vacation to get away from by big year with my wife, we went to an undisclosed location north of Tampa, Florida for a little sun, visit some friends, and well I did go birding on two days, although one was mostly to chase manatees, lifer mammal for Silja! 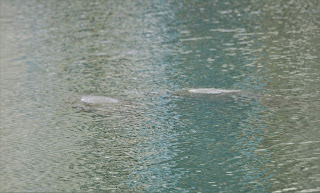 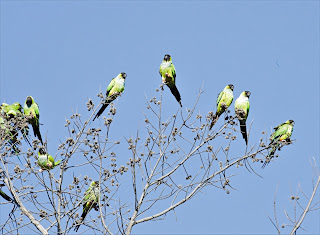 On Thursday I did go on the chase for a lifer bird to Ft Lauderdale, and ran into some birders from my big year, Donna Schulmann from new York and the garganey chase, and Ed Hopkins from Indiana and my Cuban vireo chase.  I got a lifer exotic....a blue-crowned parakeet, fwiw 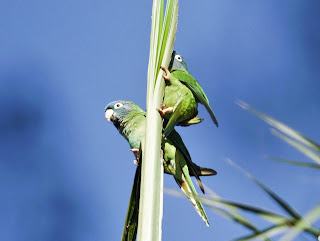 has some nice views of a pair of painted buntings... 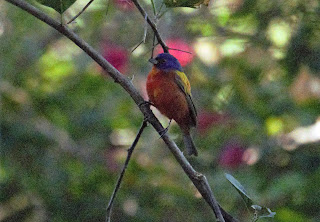 It was tricky but I finally found the bananaquit 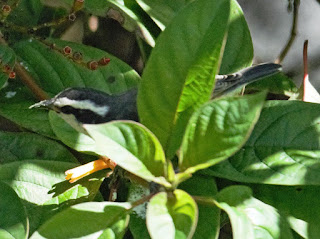 lifer bird somewhere between 790 and 846, depending on what the ABA will do with their checklist and Hawaii.  I got a laugh because my daughter was on a cruise last week with a friend and family and she texts me, knowing my life list.  "I saw a bananaquit today, dad!!"  She was in Roatan.  I respond.  "So did I!"  "Really?"  She replies.  I could feel the dejection.  I was able for once to not let her get one up on me and give me the business.

On Bananaquits....one of my favorite birds.
This Florida bird is from the bahamenis subspecies from the Bahamas somewhere and there are in total 41 subspecies of this bird which has uncertain taxonomy as not sure exactly what it is related to.  I am much more familiar with the birds of the Lesser Antilles, considered the bartholemica  group.  Which they are now working on splitting at least into two species much like spindalis species. 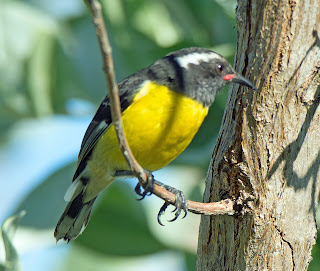 here is a St Martin bird.  It is bigger, black chinned, more striking yellow, darker backed.  Their call is a lot different, I would also say more aggressive, and when I first saw the two, I was shocked they were the same species....They don't really migrate but they disperse somewhat, and that I assume is how they get to Florida.  You'd think that over the years (centuries) they should have colonized south Florida but they have not 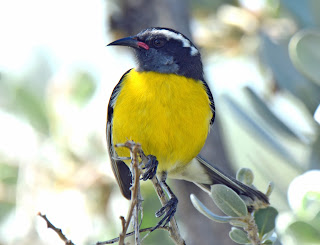 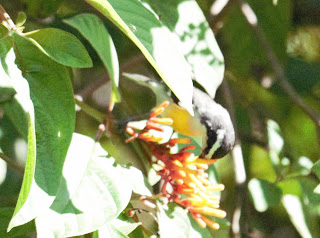 Anyhow, I finally got one in ABAdom, it was a long day driving but worth it and my wife was okay with my day away from her.  Anyhow, unlike some of the splits proposed this year....eastern and western willet, splitting the yellow-rumped warblers again, and spinning off the southern hills crossbill, this bananaquit spit I have long agreed with...so we will see, the Antillean bananaquit (pick this name) has never been seen in the ABA so it isn't that big of a deal I guess for the ABA listers

So what else is Olaf up to?

I'm giving a talk in Fridley, MN for the Sax-Zim Bog society on January 29th, 2-4 pm

Come and donate money, for a good cause--the bog.  Where would you be without this bog?  If you can't come, donate money anyhow.

Despite my comments....I have got a couple of speaking gigs....no sermons, however....

On February 10th I will be speaking in Ripon College, Ripon WI trying my best to embarrass my sons, who graduate in May, because, I'm just that kind of guy.  I've spoken there before so this year I will add a second talk on birds.  I've spoken before on business.  I'm giving two talks this year.

They want me to talk on "How Competitive birding promotes Bird Conservation?"

I will answer does it?

I've asked a couple of opinionated wise sage-types like Greg Miller to weigh in so if you have any input, I'm still working on my talk.  Dorian Anderson is composing his essay in response....

I expect to go owling on the MN-Manitoba border next week.....

So Olaf is still out there birding