Minnesota, where dreams are made 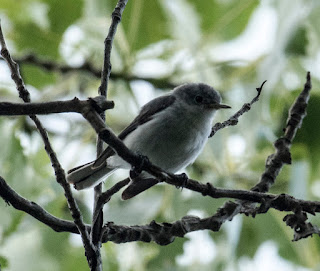 This was a busy week in Lake Wobegon...I mean Lake Olafdom.  On Sunday, I went birding with Barry to a place called Sica Hollow in extreme Northeastern SD in his attempt to put a 300 South Dakota big year together.  After the dust settled, he had three birds and I had SD lifer #270, a blue-gray gnatcatcher.   A good bird for South Dakota and a better bird for Roberts County.  I came home, my wife, daughter, and I went fishing, our first family outing this year, after I fixed a two year old electrical problem in my boat.  Ii was slow but I caught a smallmouth bass. 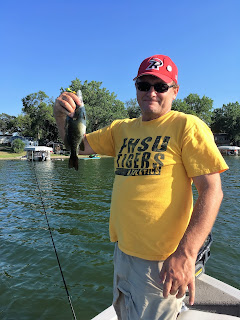 my  daughter caught a rock bass 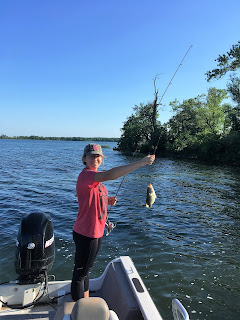 and I took nearly 200 photos of birds....good birds.....California gulls, a possible royal tern (great bird for SD), Caspian terns (good for SD), a loon in winter plumage I really wanted to look at the beak as it could have been a yellow-billed, and red-necked grebes but as I got home, I noticed........I forgot to put the chip in my camera.....I swore....those birds became tern sp.  loon sp.  and well that was at least one California gull, but I didn't even bother to submit it to Ebird....I swore, took a picture of a juvenile kingfisher chattering at me, to make sure the camera still worked and threw the camera in my car and decided that there was more in life than birding, putting myself on a week bird photo moratorium. 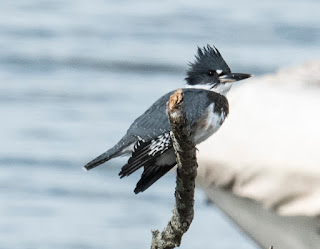 I finally finished off my St Martin Birding Guide and sent it to the printer on Tuesday and then I went on my annual mission to Alexandria MN, the "Birthplace of America" 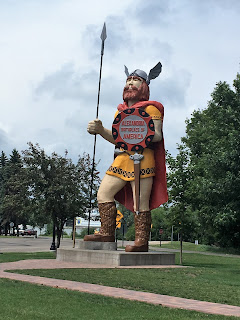 My favorite tackle shop is in town and I go twice a year, once to drop off my broken rods to get repaired and then a week later to pick them up on my way to Canada.  I visit Big Ole, my name sake from the 1964 Chicago's World's Fair.  The Minnesota exposition which featured this statue and centered around the Kennsington Rune stone, found near to Alexandria and permanently stored at the Runestone Museum, purportedly from 1362 and an ill fated expedition by Scandinavians that ended in blood at the headwaters of Hudson Bay drainage in west central Minnesota. 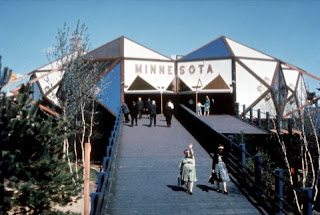 It is one of those Americana places that should be on everyone's summer visitation list.

We came into Minneapolis, I met my wife who is off to Paris with her sister as payback for my big year, but we had another stop left.

Have you ever dreamed of owning something outlandish?   We have.  I love art.  I love cool houses--he more exotic and artsy the better.  My wife's high school chum has recently moved back to Minneapolis from Rhode island and lives down by Lake Calhoun.  Nearby coincidentally, is an interesting house for sale.   "The Olfeldt House" is one of the last built authentic and signed Frank LLoyd Wright houses, finished just after his death in 1959 and sat 15 blocks from my wife's buddy in St Louis Park.  We had lunch and the obligate cultural activity was to tour this house.

Frank Lloyd Wright.....he has been gone for 59 years but is still an enigma and is still the architectural icon of American in the good years

They don't build house like he did anymore.  Each one is a statement.  His prairie homes are cool and this house from his his Usonian House design, I like better, and one of a few more than 400 in the US left was worth the trip to the city alone.  FLW simple uncluttered designs are what I like. 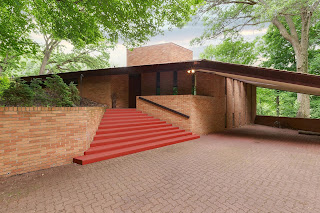 This is a one owner, three bedroom, 2400 square foot signed FLW house WITH a basement (he almost never built basements) and on three large lots including a birding mecca marsh, for just a cool 1.3M.......(gasp!), well St Louis Park is a nice neighborhood.......a vacant lot is worth 350K here.

The house was mega cool.  It was almost how I would design  a house.  privacy, long hallways, storage, useful and no wasted rooms. 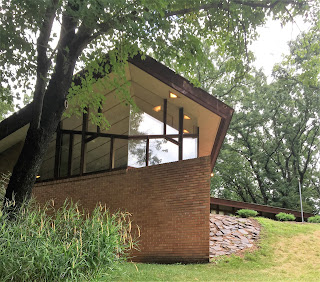 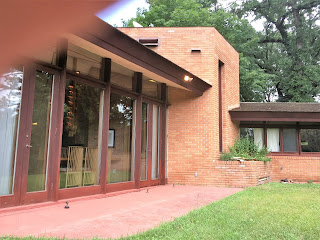 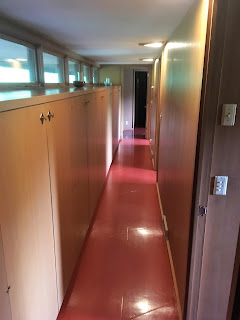 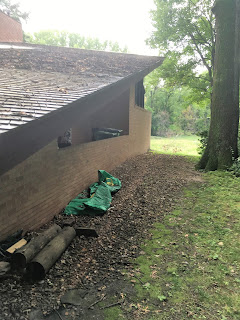 The inside was even full of much of FLW original furniture......! 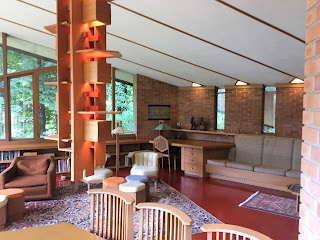 My art collection needs a home and well, this house needs restoration and preservation.  It is a classic and it has a story needing to be saved for the the next generation.  Somebody has to do it, it might as well be me.

We happily walked through it thinking of how we could live in harmony in this house.  We could swing it, and well, we could show it on Saturdays...

"You can put a bid on the house."  My wife said driving back.  We talked about what could go where.  Plans on renting rooms to share the FLW experience....taxes, we looked up grants for preservation....it was all good.

Later, I demurred, the impulse waning to buy, but then we had dinner with friends and as the alcohol dug in discussions reigned.  Our friends have been traveling for a decade selling their business in Wisconsin.

"No,...and nowhere."  I said drinking a long sip of wine thinking and then I thought of an analogy.  "Is owning a piece of art requiring total dedication even good?"   In this case the art is a house, and should one be a slave to a house, that is what it is.  This house needs upkeep, money to exist.  I could buy a Anders Zorn oil canvas masterpiece for about 1.2 million.  Which is easier to maintain?  Which is more practical?  Which has the greatest resale potential........etc.

The painting wins on all except the "practical"  Neither is very practical.  My wife looked at our friends and drank a glass of wine and said honestly.  "We are gypsies.  We like to roam."

We ARE gypsies.  Gypsies don't buy 1.3 million dollar houses.  Gypsies camp.  Gypsies live in trailers, gypsies move from place to place.  Home is whatever bed we share together each night.  As much as I love that FLW house, we can't ever own it.  I came home and we sent a deposit for a Grand Canyon Rafting trip in 2018 to the person planning it.  I may have to marry someone on the river next year, and we filed away the paperwork on the house, never to be thought on again...the dream lasted 8 hours and 12 minutes.

At least the dream didn't end up being a nightmare.

My wife left for Paris thinking we had made a great "couple" decision of the future of our lives, one in which we both agreed...and I think we had done a good job.  We will try to keep being net sellers of things....life is an adventure, it is not a house.