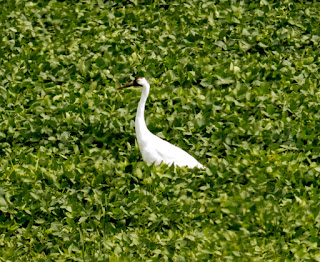 Yesterday, I got interviewed for radio podcast on Animal Radio's Pet talk.  It airs next week and was on my 2013 habit of nude birding.  They got a laugh.

I found it good to be on the lake this week, there is nothing like being home 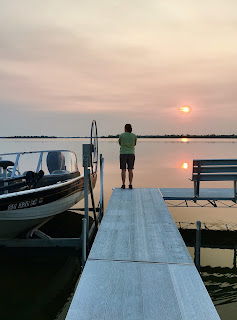 Up in Canada, a friend of mine  encouraged me to do a book on my fish stories, my first love, pike fishing and so I started that on Tuesday and have a good start going and YES, I am including some 2016 sections on my big year.  Haven't got to that yet, not sure if it will be 10 pages or 100 pages but I'm writing.  I needed a break this morning  and as the rain was coming in, and my wife scurried to finish painting our shed.  We've had a very wet August.  I'm predicting bad crops around here. 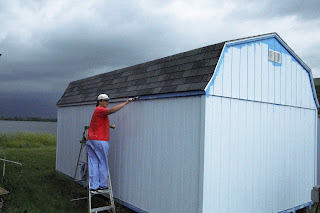 So I decided to go and chase a nearby bird, 17 miles away from my house on Enemy Swim Lake.
I drove around the lake and then west, through Grenville, SD  population 59.  Grenville is an odd town, and has not had the best of years recently as Waubay Lake rose up to swallow some of it and for a while literally you couldn't get there until some of the roads were raised moved around the water,   Some roads had to be raised 30 feet in some cases.

In 1915 and for decades, the Soo Line did some great marketing attempts at this God forsaken land on the top of the Coteau to sell land it got along the new spur and the only spur in had in the state.  They named places like Eden Park, and Lake City, as enticements and both cities never amounting to anything and even together, with Rosyln and Grenville combined would not be anything anyone would mistake for a city.  Today Eden is a place of 79 people, lake City is 52 and Grenville the end of the line, was marketed as "an industrial center" in the 1951 Soo Line annual report along with Minneapolis, Duluth, Milwaukee...those three have nothing in common with Grenville,   I think some executives were smoking something back in the day.  Soo Line was trying anything and well 40 years ago they gave up, ripped up the track west of Veblen and left these towns to fend for themselves.  The only thing that was ever in the Grenville was a very unimpressive grain elevator and a diminutive warehouse that today look pretty sad. Such is life in the rural prairie.  Times have past us by... 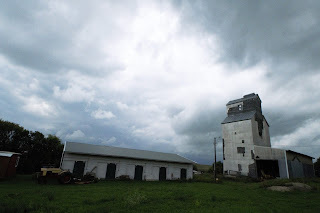 The small town has obscure Polish family names for street names that are all one lane wide.  The local baseball team has the cool name of the Grenville Guzzlers.....you can guess the pastime here.

I even saw more white pelicans in town than residents 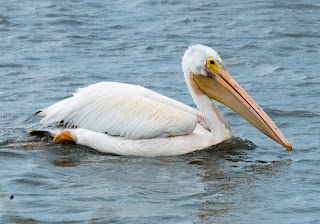 Dead west of town, was an off again on again report of an oddity.  Nobody but me and Barry Parkin really birds up here so the off again is expected.  The whooping crane, a cool bird nearly extinct but the population is slowing rising, more , now than the four burgs up the old rail line:  Roslyn (178), Eden (79), Grenville (59) and Lake City (52) combined, but just barely.

This crane has been around for a while and using the bands, this is a Wisconsin bird.  Neceedah must not be so welcoming this year as I also saw a Wisconsin bird in Ontario in June.  It took me a few minutes to find it in a bean field but there it was.....South Dakota lifer 272....we can argue if it meets the ABA rules or not since I know where it is from......... 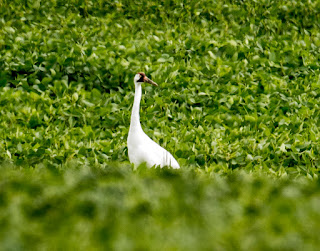 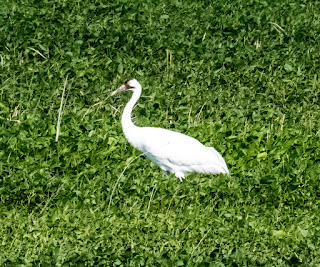 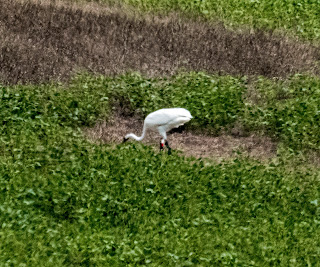 Finally you can see the bands on the leg.  The only better near extinct bird that could come to SD (lesser numbers) would be the California Condor, I shall wait patiently for one of those to show up, somehow, I think on my deathbed, I'll still be waiting.  I'm happy with the crane.  Oddly, I've never seen a sandhill in this state...yet.  Such is my bizzaro world of SD state listing

So there, another SD lifer.....one at a time, someday 300.....but I'm still out there birding getting birds.  Barry wants to go out on the eclipse and hear morning songs in midday, I'm not sure that is what I want to do and I'm not sure if Nebraska is on my travel plans next week either.

maybe I'll see what a whooping crane does at an eclipse....probably ...not much