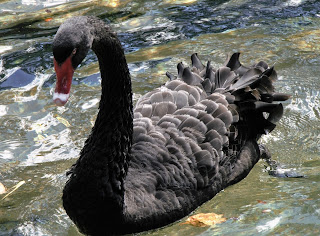 I returned from Oklahoma stopping off in Lindsborg Kansas for some quality medvurst sausage.  I bought 10 pounds.  Lindsborg is a pretty town settled by Swedes and nearby to a namesake of my hometown--Falun KS.  They have a small Lutheran college, and cool town celebrations.  Their bed and breakfast is almost post card perfect. 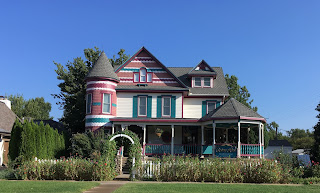 In this Swedish town, the most interesting looking thing, though was this really odd driveway 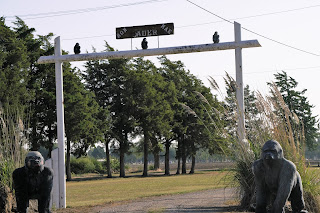 Sweden, equals gorillas?  Maybe?  Maybe not!  It was across the street from the sausage shop. and I had to take a picture.

Unfortunately, I think my prophesy of the demise of the masked duck proved correct as on Saturday morning, A group of hunters had taken over the wildlife area and the duck disappeared.  Sigh....hunters.....

What a weird week.  First there was Hurricane Maria hitting Puerto Rico, destroying Dominica, a deadly earthquake, there was the whole crazy NFL thing along with the whole Emmy award thing.  I want to watch football and an awards ceremony, If I wanted politics, I'd watch politics.  All week, it seems, somebody was protesting something and so I felt the need to protest something.  We had yet another flood in my South Dakota home...and I went on a college tour.  My short answer to that teenagers.

We flew into Tampa, I had a meeting, and I went to St Petersburg, FL on a college tour of Eckerd College with my daughter and wife. 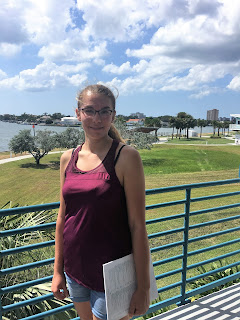 here is my youngest at the Marine biology building.  Wow was Eckerd a cool school.....relaxed students (I wont mention the 2/3 of the class that fit nicely into a bikini) and were.  They had a beach, research on the interaction of Osprey and Monk Parakeets.....wanted every student to go abroad and did I mention the beach??  They even allow pets.  Can I go back to college??
I'll pay for it this time.

Unfortunately as my wife and I liked it, our daughter being a teenager, was the opposite.....sigh.  I need to work on the psychology of teenage girls.  Maybe she is a black swan?

It seems some birders seem to report any bird they see, no matter what ignoring ABA rules.  It seems odd to go on a big year or even list and not know the rules and report birds in exotic duck ponds.....or birds that don't count, like the black swan from above. 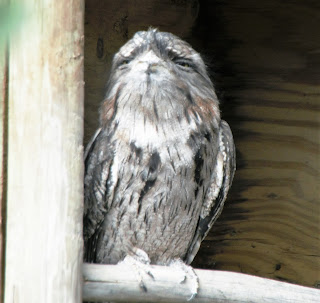 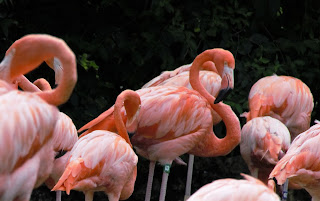 they are on the list and I'm in Florida....I see ebird "counts" the Whooper swan and the white-cheeked pintail from the Tamrac Exotic duck pond....??

Okay....I'm just sick of seeing the ebird reports of this, so I started submitting protest posts....sure I'm making friends and influencing people.  If the NFL can protest at the National Anthem, I'm protesting these zoo bird posts.  It really irritates me.  This is the time in the history of the world that it seems it is okay to protest everything.  Why not screwy ebird reports?

I went to a local Buddhist Temple for a little Buddhist breakfast ...here we are in the noodle line.  Very good noodle soup.  The fried bananas........YUM!! 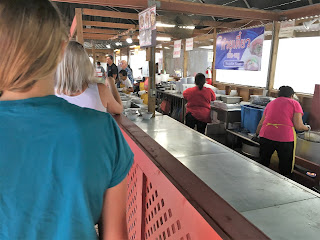 The temple was quite nice: 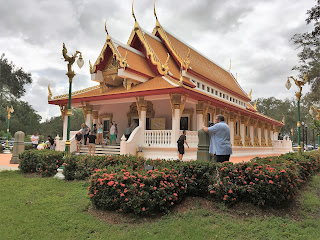 I'm covering all of the religions this year...Wiccan ceremony anyone?  The Presbyterians across the road should figure out that there is 400 cars on one side of the road and just twenty on theirs on a Sunday morning.  Maybe a little Presbyterian Lunch would show their dedication.  Free food (donations encouraged at the temple) to the masses is a great way for outreach in the community.  These smart Thai people got it figured out.  The nearly abandoned Christian church....I don't think so.

I ran into an old Frat brother Craig Casper from Ripon College, he is moving from Colorado Springs into the area.  Craig needed a new place to go, why not a Buddhist Breakfast??.

so yes, an odd week....then we flew home and learned that it had basically rained since we left and our bridge was out again.  Just a little water 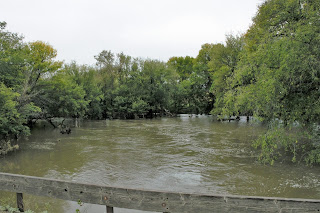 At least it was not now over the road, but well it eroded the bridge again....

It was not like any of the Black Swan events down south or in the islands but again, our bridge is closed and I have to drive 10 miles around to get two miles.........

Oh and maybe the masked duck didn't get shot... there is a single report tonight, I'm a little suspicious but time will tell....an intrepid little duck, if the report is true.

Olaf
(The blackest of all the black swans as no one can predict what I'm up to)
at September 25, 2017