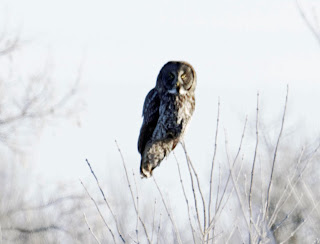 There is just something about going owling in the dead of winter.  Its cold, its lonely, its tedious, and its tripping over your feet, over a log, over a snowbank because invariably, your light has frozen up and won't work and wherever the owls are you're not and trying to get to them in the middle of the night is always through stuff humans weren't meant to walk through.

Owls are humorless, serious, and generally ominous creatures.  The words happiness or joyous and owls are rarely ever used in literature together.  I'm not sure this is good...or bad. It just is...

Throughout human history, the symbolism of the owl has almost always represented evil omens, demons, illness, disease, and death to many ancient cultures.  The Boreal owl, Aegolius funereus, means literally the owl of death or funerals, corresponding to a Norse/Germanic belief that this owl would show up on houses of those soon to be departed from this life.

Here in North America, in most Native American tribes, owls are a symbol of death. Hearing owls hooting is considered an unlucky omen, and they are the subject of numerous 'bogeyman' stories told to warn children to stay inside at night or not cry too much, otherwise the owl may carry them away. In some tribes, owls are associated with ghosts, and the bony circles around an owl's eyes are said to be made up of the fingernails of ghosts. Sometimes owls are said to carry messages from beyond the grave or deliver supernatural warnings to people who have broken tribal taboos. And in the Aztec and Mayan religions of Mexico, owls served as the messengers and companions of the gods of death.  The great-horned owl specifically is viewed as the humorless lawman of the Hopi which is the straight man to respond to Koshari clowns and their antics.

I've had a little luck finding owls this winter...

The great grays above were from the cold of northern Roseau County, Minnesota and are down in the bog, just not down in numbers.  Back in 2013, I wrote a blog "Pardon the Irruption." when I stumbled upon an irruption of GGOW at this same spot, and saw 31, then buried my car and had to get rescued on the Canadian border.  An irruption is defined as any sudden appearance of a lot of birds not usually found in a given spot for some reason, there.  That was my second hard core irruption.  In Denmark I ended up in the middle of nearly a hundred of the cool birds when I was picking up my first Volvo.

The only irruption going on in South Dakota is white-winged crossbills.  They have been all over the state and have moved into Brookings where I got my lifer state bird last year..  On Tuesday, I stumbled upon 19 of the critters in a diminutive cemetery just west of the Minnesota, South Dakota line, ten miles from my house.  The first ebird tick in Grant County ever.... 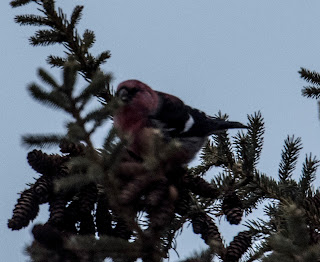 The cool thing was I found them.  Always fun to dig out a rarity, even if it is just wwcr.  Best thing in Grant County South Dakota in a long while.  I was out searching for owls, sometimes a guy gets just dumb lucky.  Been back twice, a red-bellied woodpecker is the best I've gotten there since the big find.


Great Horned Owls are out and about. 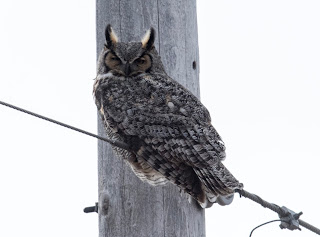 I also stumbled upon one that was watching a group of feeding pheasant intently near the shore of Lake Traverse in Roberts County, SD. 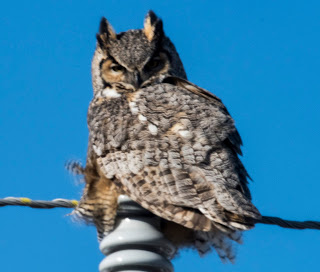 Tis' the season of Snowy Owls unfortunately they seem to be either way north of me or much farther south, as we are in some sort of nadir for them.  I just so rarely see snowy owls near our house in Milbank, although I did have one a few years ago fly over our backyard. 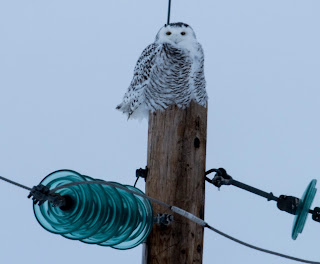 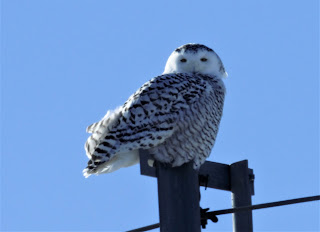 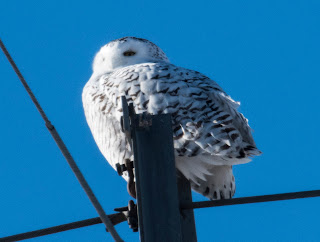 Northern Saw whet owls.  These little buggers are hiding out in the small groves of pines and junipers around.  They had been seeing them at three spots in Fargo, which I hooked up with a local guy named Dan Mason while I was up there when my daughter toured Concordia College of Moorhead...go Cobbers!  Fear the ear and all of that..... My daughter is down to four colleges and refuses to talk about her choices.
So I don't know how the lunch etc worked out but it was better than than finding owls along the Red River of the North....we struck out.....later at West Acres mall, my wife got her year
Stuffed owl  Asio Stuffedicus 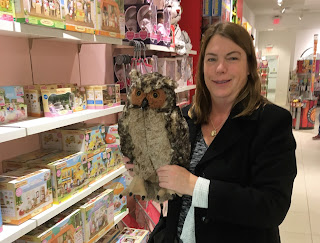 They tend to like shelves in toy stores.  This is Bison country and one has to be careful of them as well. 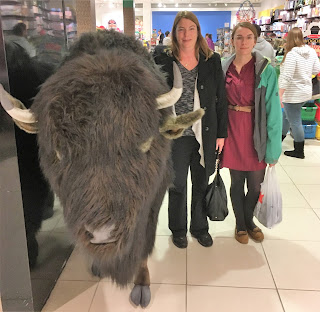 A full-sized bison toy is what every guy wants, I thought about it buying one, but then I didn't know if we had room.

I spent some time digging around for the little owls, but no luck, I found one last March south of Fargo and I'm sure if I keep at it, I'll find one....

I'll keep up the tedium and vigil to find more owls until I get up the gumption to go chase something.

Just remember....never wake a sleeping owl, words to live by