Where the Battle Wasn't 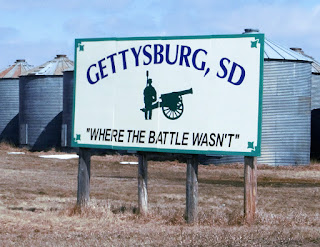 I've been trying to catch up, working on my business interests and trying to get a handle on the affairs of my grandmother. I needed to take a day off and just go and do something else.  My travels this week took me to central South Dakota, to a town founded by 200 Civil War vets from both sides, after they were given a break on the amount of time needed to homestead.  This small town claims to be famous for where the battle wasn't, there is even a sign on the east side of town showing the distance to Gettysburg, PA, 1450 miles away. 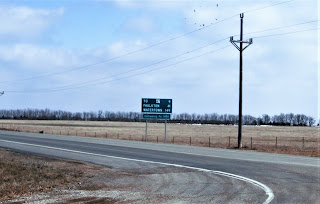 I went with Barry the Birder (Parkin) from Aberdeen, as we had a few fresh leads on birds I needed for my state list and one for his.  Barry took a break from redoing his bathroom surviving some well earned scorn from his wife.

Like usual we stopped and smelled the roses a bit along the way.  Gettysburg is also the home of Medicine Rock, to say Medicine Rock is legendary is an overstatement as the rock is largely forgotten, even though it could be the most important rock in North America. 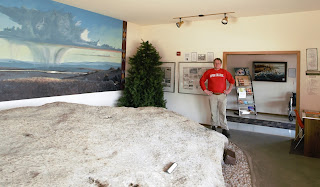 So two questions come to mind.  1.  Why is this huge rock in a building and 2.  Why is it important.

1.  Originally located on the Missouri River near the mouth of the Cheyenne Creek, this sacred rock to the local indigenous people who say the foot prints were made by the Great spirit was noted in the early 1800s.  It was visited by everyone famous of the period.  1879 by Gen. Custer and casts were made of the very deep foot prints.  A local woman donated 160 acres to the state historical society to care for it and save it at the turn of the century, but they forgot about why they had it and apparently sold the land.  Then as the Oahe Dam was completed 60 years ago, and the Missouri was going to be flooded and there was no money to save the rock so Gettysburg bucked up and paid for it and moved it to a park.  The rock was removed before it went under water and was put here in 1989 to protect it.  Thank you Gettysburg for saving the rock and shame on the South Dakota Historical Society for being idiots and almost letting the most important piece of ancient history in the midwest to almost be destroyed.. 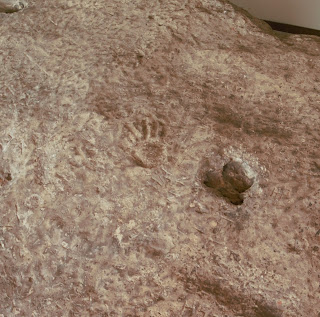 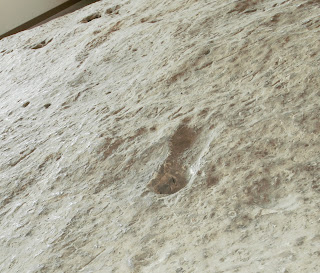 How old are these things?  What people made these, and were they pre glacier?  What people were even in this part of the world that many eons ago?  I suspect, the answer will shake the history of humanity on this planet and continent but no one cares, studying things in fly-over county is not sexy for archeo-paleontologists
Just yesterday, there was a published report about the oldest human footprints found in North America on an island off of British Columbia but I doubt they have compared to this one, because...well...again this is Gettysburg South Dakota

The Sunset Museum also has a 6 foot Auguste Moreau Bronze, which I should say is attributed to him by the Museum, which is named "Queen of the Prairie."  I am a bit of an art historian.  I'm pretty much an expert on a couple of artists of the period, but not Moreau.  There are some problems here.  One, smaller works of the same theme, are called by other names and since this was a Frenchman that died in 1917, and was not known to have visited the US, it would have never had such a name. 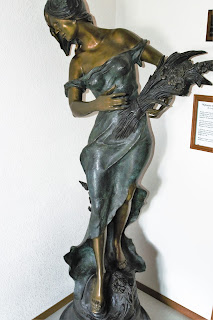 There were also a whole slew of Moreaus, it was as much of a family business as anything. As far as authenticity goes there are many MANY reproductions around.  Since the sculptures were cast, and there were many members of the family Moreau that worked on these, there was nothing to prevent the family to produce multiple statues using these casts.  This statue might not be "fake" but it is probably "in house."  The likelihood of someone in Gettysburg having the original is quite unlikely.  Having a factory stamp "Paris" somewhere on the statue means that it was made at the factory after the Moreau members passed.  Now some of his statues command a good price but most are made of spelter and just painted,  So who knows if this is a great piece or just a very attractive period bronze piece that represents the "Allegorical woman " from the period.  I liked it.  Not everything has to worth lots of money to be appreciated.

I drove on through Gettysburg to the Missouri River and saw and photographed badly two lifer state birds. 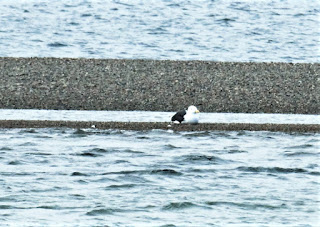 A good bird for South Dakota seen once or twice a year or so.  This one showed up on Tuesday 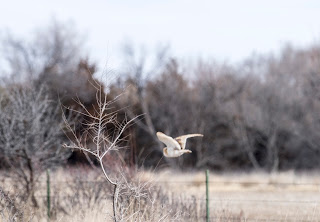 A very good South Dakota breeder which only breeds in a few isolated places along the Missouri River at the very edge of the range.  We flushed one out of a hole on a river bank.

So, a good, but a long 600 mile day in a car.  I tallied 2 state lifers, one I never figured I'd see in the state (the owl), a cool rock, I will revisit, and a nice piece of art.  Yes, Gettysburg, South Dakota, it is a place where the battle wasn't BUT also a place where a lot of interesting things are.

Get off the highway and look around, you'd be shocked about what you find.