Of Omens, Numbers, and Booksignings 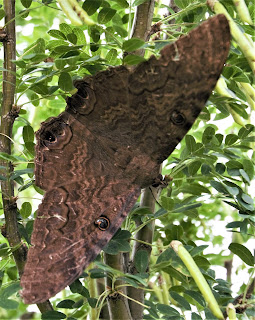 Tuesday was a strange day out on the prairie, a strange day as part of a rather weird week.  I kept finding myself saying, well that is odd, or saying "I never seen that before."  The fence posts near Summit, South Dakota were littered with dozens of common nighthawk including one of the lightest colored ones I've ever seen. 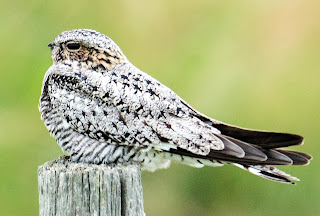 It was a very pretty bird, but even the darker ones are pretty sitting 20 feet away on a fence post. 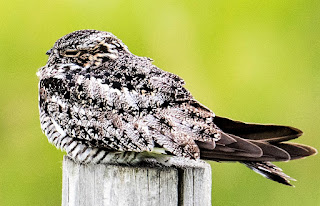 The Wilson's snipes had to fight for a place to call. 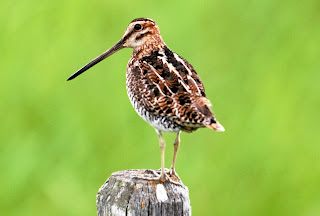 With the rain this week, it is probably a lot drier sitting on a post than hiding down in the grass in the prairie.

Not everything one sees out in the field is a bird, in fact, todays find wasn't even warm blooded.  On the east shore of Enemy Swim Lake, I found the largest moth in North America, the dark and mysterious, Black Witch Moth.

Typically a creature of the night this foreboding and ominous insect filled with dark mythology flew in front of me and tried to hide on the side of a bush.  They say if one touches you, it can predict your death, but seeing one like I did, after a loved one recently passed is a good omen and means my grandmother's spirit is nearby.  The bad luck I had was on Friday so I wasn't having any more of that.  I blew a trailer tire on US 12 pulling my boat, destroying my fender but oddly despite 90 percent of the tread having been ejected the tire was still inflated.  This was after my motor started missing out on the lake.  My solution was that i needed a new boat.  I also hurt my back on Sunday and couldn't move much since.

Black witches are a great find.  This male is very far north for them and I have never seen one in South Dakota but I'm no expert. 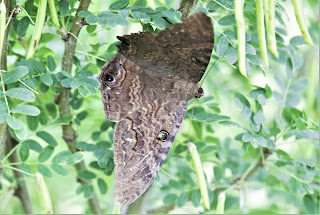 Maybe burning this chair seemed like I symbolically burning a witch and the moth came to remind me that doing that is NOT a good idea? 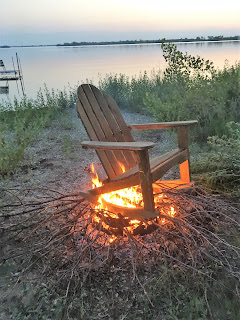 I don't know about those things, during my big year, I got cursed by a something I had to lose in Maine at a troll village, so who knows what is real and what is fantasy in this world.  All I can say about the moth is it was a much better find than the dickcissal, which is yet another fence post bird 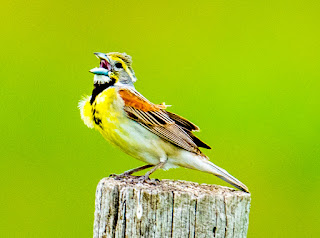 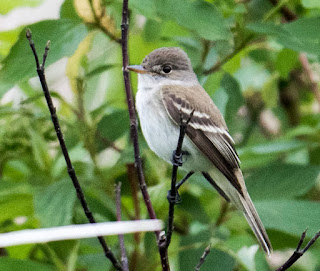 I had two book signings since my last missive.  One at DDR Books in Watertown, SD, where a woman gave me a very interesting picture of a Peoria Gateway train near Revillo SD maybe 4 miles from where I birded 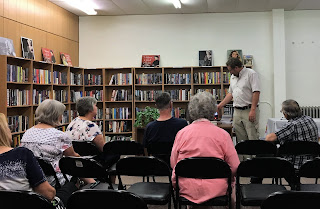 and one at the very cool store Zandbroz Variety in Sioux Falls.  There I met a Volvo employee on vacation from Sweden, who just happened to be someone whom I had lunch with coincidentally in Goteberg six years before at the car factory...small world.  I also met many fishermen who apparently don't read books, but they had fun stories.

It is tough to market a book.  I just agreed to give a talk to the Prairie Lakes Audubon Club in Alexandria MN next month, which since "Confessions of a Pike Whisperer" is as much of a birding book as a fishing book, might be a better audience.  I know birders read.  I have a book signing later in Alexandria, so we'll see.  It is one book at a time.  In the end I just like telling stories and meeting people.

I did go birding near Sioux Falls on the Big Sioux River across from Iowa nabbing a bucket list item, South Dakota bird number 300, an eastern Towhee, but that bird was not photographed, a second towhee stood momentarily for a photo which showed it was not an eastern towhee but a rather eastward extreme spotted towhee, more commonly seen in the western part of the state. 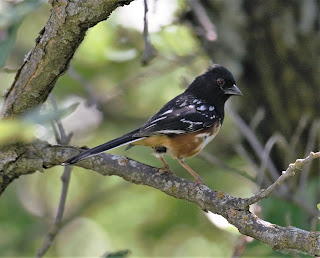 I was thinking it would be a champaign moment but it made me feel cheated, as I couldn't get a decent photo of the bird I needed...oh well that is birding.  I took ibuprofen instead.

So I don't know what to make of seeing cursed moths, since all that black witch did was become the cherry of a rather strange and not very tasty cake, as they say, but my World cup team, Iceland won as did the Swedes.  That bug was the best thing I'd seen all week and I guess that was something.  300 in South Dakota?  That is just a number, not even that big of a number and all of my birding is numbers and lists and to be honest mean very little to anyone except me.  Much like selling books, each sale doesn't matter but it is the stories and the oddity of meeting the Swedish couple I'd met before that matter to me.

You know my back even feels better which is good since I'm off to the hinterland of northern Ontario to chase pike and spruce grouse....that will be my next report. 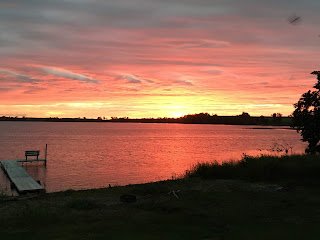