A Glamping We Will Go! 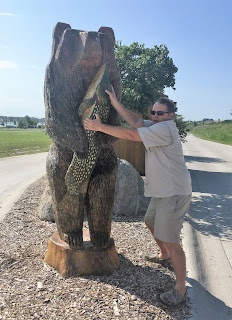 Dan Lanik, a local artist in Wahoo, Nebraska  was moved when a local gang of utility workers cut down a huge pine tree and were just taking the log to the dump so he carved a bear holding a large pike.  He donated it to Nebraska and it stands at the entrance to Lake Wanahoo State park, guarding a lake with neither bears, nor northern pike.

I can feel this, I catch a record pike and some bear would sneak up and steal it from me, as we all know my relationship with bears.  I can picture me grabbing the fish from the bear...."give it back!"

We stopped in Wahoo yesterday on our way to Lincoln, Wahoo, what an odd name for a town...

Wahoo is defined as:
a)  A type of bush or shrub
b)  a fish of the mackerel family that can exceed 150 pounds
c)  A famous submarine sunk in WWII by the Japanese
d)  An exclamation said upon buying something cool or after catching something like this big fish

As I implied in my last missive, a life changing event was waiting for us in Lincoln, much like the scenes from "Yes Man." A Jim Carrey Movie.  We did not visit the sights in Nebraska's capital, however, because we were getting the three hour tour (remind you of something?)....we were getting the tour of our new....toy?  home?  What really is it?

You see Olaf is going back on the road, with Silja this time.  Bob Tiffin of Tiffin Motorhomes describes it perfectly with the motto of his company...."Roughing it Smoothly."

By 2pm,we signed the paperwork and we now own something made by Mr. Tiffin, a new 34 foot Allegro RED, a glamping (glamour- camping) machine that has its own laundry, household refrigerator,and four TVs, and an impressive 800 ft pounds of Cummings powered tourque .........so behold the behemoth..... 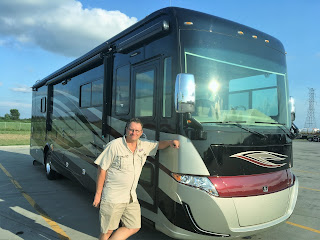 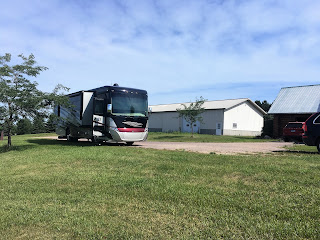 Truth be told, it was a little scary driving it for a while. Passing my first truck  carrying cut wahoo driving to Wahoo took a little nerve, but I survived.  The drivers between Lincoln and home survived.  It is big..so big...and there are 43 foot versions of this. We skipped the submarine memorial in downtown Wahoo, which is named for the bush and not the fish, which can actually swim faster than this land yacht can drive on a two lane road in most states (the fish and not the bush).

Buying this is a big deal, it scares us a bit.  We are not selling our house...yet.  The maiden voyage will be west in September, but we may have a few mini test trips before that, and then, let the glamping begin.  A cat and dog were freaked out inside it this morning in our yard.

We will have to christen the land yacht, but we have to figure out the name of her, something this big needs a name.....we will accept submissions.  Before that...