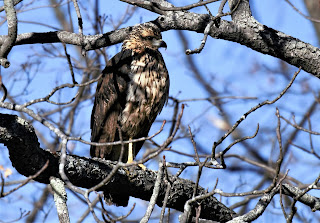 With Blizzard Eboni coming into my house and I just a hop and a pop from the Minneapolis Airport for Christmas and nothing better to do, I caught the last seat out of town for Boston....destination, a bird AND a beer.

The Great Black hawk is a bird of coastal Central America.  I have spent hours on hawk watch in Roatan trying to get one and have seen some cool birds....but alas not a great black hawk.  It wasn't that surprising when one turned up this late spring overflying South Padre Island in Texas, but it was not chasable.  It seemed lucky that someone was there to photograph it.  It was even weirder when what many think is the same bird turned up in Maine last summer and then it returned to a park in Portland and for now well over a month has waited patiently for me to get around to going to look for it.  This bird needs a map or something.

I arrived early this morning after getting lost in Kennebunkport, Jeb Bush and family were around or so I hear, I had to stay at some inn, and then figure out where I actually was.  The things a guy does to avoid tolls.

I figured finding this bird would be easy but alas no.  It was not in the park, and then birders got divided into two groups.  Those that waited in the park for the bird to eventually show up, and the rest of us who had to go dig it out in the residential section.  I have spent my share of time being a "skua" birder, one who gets results from the efforts of others so it was okay for me to go and dig the bird out.  Everyone I came in contact with was telling me stories and giving me advise.  The bird had saved one guy from buying squirrel traps, and he recommended me staking out his collection of the little devils. 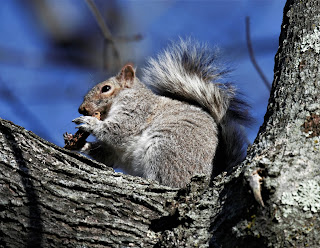 There were fat squirrels everywhere, so I didn't see the point to being in his backyard all day.

The homeless guy sleeping in the park gave me some advice about the majesty of the great hawk and how the hawk made America great, again.  This caused me to think.  A probable Honduran refugee hawk had immigrated to America and was making America great again.  Hum, sort of turns something else on its head. At 9 AM,  I heard a single crow mob call, I headed that way and figured I'd nail the bird but instead I found an urbanized barred owl 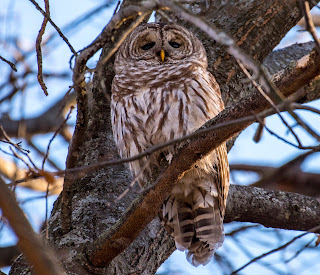 It was worth a text to the group but only a few walked up the hill to see it.  I spooked off the crows and eventually like the hawk, it disappeared. 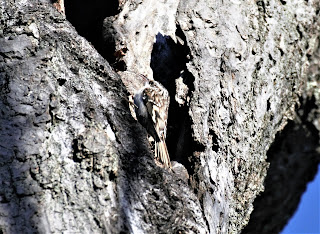 I got a state creeper record for me and then began the tireless slog in the neighborhood.  It had to be somewhere.

It was pushing twelve when I stumbled upon a hawk with two other birders, but it wasn't a black hawk, just a coopers hawk, but one that was eating a pigeon. 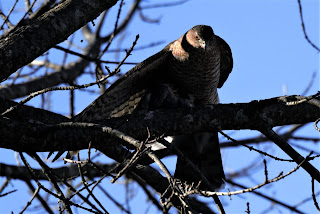 I circled the residential district and then got a text and was just a half a block away.   I looked down the street and another birder was giving me the arm waves from a block away and then I looked between buildings and BINGO! 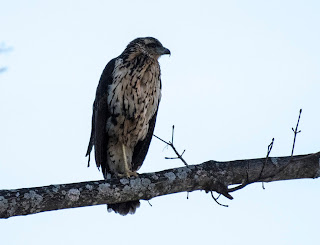 I was the second person to see it today.  Oddly I was standing in the backyard of the guy with the squirrel problem, so maybe...he was on to something.  It was there for an instant and it flew left and then right and eventually it flew out of the neighborhood and landed right in front of the others who then had it pose for them.  Fifty birders came out of nowhere as the bird just sat there and posed. 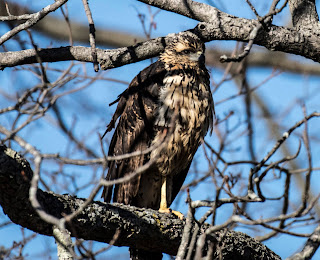 I needed the exercise anyhow, so the walking was good.

Some say the greatest Blackhawk of all time is Bobby Hull, others favor the chief Black Hawk, while I am partial to this "wrong-way" Feldman bird currently residing in Deering Oaks Park in Portland.  I'll let you decide but until them. 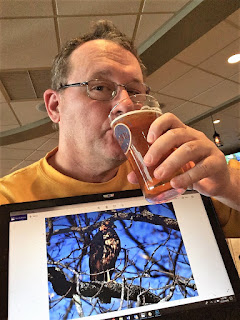 Ah that sweet taste of blueberry in my lager, got to love Portland!
Better late than never, my RV is in Alabama so could worry about other things like my life list.