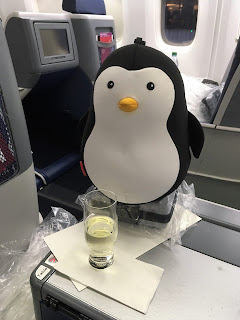 TRAVELING, IT is said, can be the best of times, and it can be the worst of times.  As we boarded the first leg of our flight to Montevideo, Uruguay, a two hour flight to Atlanta, and settled in a first class row, two, for us, it was the best of times.  For our travel companions, Don and Nancy Harrington, now of Gary, SD, previously of Northfield, Minnesota, it was the worst of times.
They had booked their flight in two pieces, one on Delta and one on Travelocity, and as the computer showed they were stopping in Rio (even though in reality only to catch a connection), it demanded a visa,  This despite Brazil not requiring a visa for transit stops, but two reservations, meant a computer flag.  Brazil only started requiring visas when we started requiring visas from their travelers around the Rio Olympics.  Delta would not let them get a boarding pass.  I joked to a Delta representative on my side of security.  “Nothing a credit card wouldn’t solve.”  Unfortunately, it looked as though it would take many thousands to solve it.
Luckily, with all my big year travels, and open ended tickets, I consider myself a very wily traveler.  Delta and all the Canadian airlines gave me grief in arriving into Canada with open ended return tickets, once I even was forced into the inner sanctums of immigration, but I talked my way out of it.  I’m certain, I could have talked my way out of this, but…I wasn't there and as, for us, I had really nice seats, I texted, we will pick you up in Montivideo airport whenever you get there.  We had slush on the first week of our schedule.   They'd catch up.
We landed in Atlanta and then got a text from them back in Minneapolis, they had boarded.  It turns out they weren't even on our flight, and we'd met up with them in Atlanta, they were a little poorer and well, we all had a laugh.  I'm sure it wouldn't be the first fiasco of this 21,000 mile trip.  We were circling the Atlantic Ocean and the first stop, would be Punte Este, located in Uruguay, a place to tick a bucket list "Visit Uruguay."  I'd have a lot of bucket list items and I had some serious goal birds, one of which the Wilkin's finch had only been logged on four eBird checklists, some others, Tristan thrush, Gough moorhen, just to name a few would be marvelous birds, but tomorrow I hoped at least to tick a kelp gull, I'd be happy to start with that.
It turns out we had to part ways again as they were heading to Sao Paulo and us, Rio before we landed within a few minutes in Montevideo, oh well, they can find me at the Alamo counter.  It was a long trip, Leroy (above) is not a heavy drinker so he could only get a single celebratory campaign, the stewardess asked me what the penguin wanted and I paused, what does a stuffed penguin drink?
All for now, day one is almost over and we have a really long 9 hour flight below the equator, my first time this far south.