Eating our way across the Mother Road 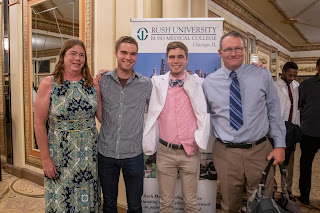 It was like we were doing some crazy Route 66 tour these last two weeks.  We planned on following the old route as far as Flagstaff before heading south, it looked as though we caught the classic highway in Tulsa, but no...we actually started in Chicago, where Route 66 starts.
We flew up to Chicago to celebrate our son Tyko's (Seth) matriculation into medical school at Rush University in Chicago.  They call it a "white coat" ceremony where they issue the white coats to each first year medical student.  Each student stood and introduced themselves, said their major, where they went to school and where they were from. 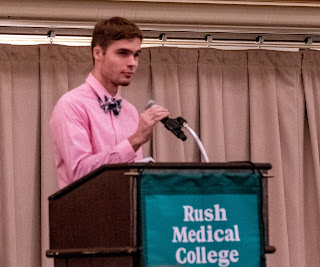 One student claimed he majored at Arizona State in Partying, our son went to Ripon College and majored in Computer Sciences and Biology.  There is only one student from South Dakota at Rush, though, the few the proud, I guess.
Our other twin, Allwin drove down from Madison and we had a nice visit, celebration and ate food at Greek Town and then he drove us back to O'hare and we flew back to Tulsa to continue our journey westward and catch back up to the fabled highway.  We had to miss a wedding of a friends' daughter in Massachusetts but our son was sort of a late addition to Rush and so we couldn't do it all in a very short period of time.
John Steinbeck in The Grapes of Wrath Could not have said it better.  “Highway 66 is the main migrant road. 66—the long concrete path across the country, waving gently up and down on the map, from Mississippi to Bakersfield—over the red lands and the gray lands, twisting up into the mountains, crossing the Divide and down into the bright and terrible desert, and across the desert to the mountains again, and into the rich California valleys. 66 is the path of a people in flight, refugees from dust and shrinking land, from the thunder of tractors and shrinking ownership, from the desert’s slow northward invasion, from the twisting winds that howl up out of Texas, from the floods that bring no richness to the land and steal what little richness is there. From all of these the people are in flight, and they come into 66 from the tributary side roads, from the wagon tracks and the rutted country roads. 66 is the mother road, the road of flight.”
Now the road’s children, I-44 and I-40 are also still roads of flight, of retirees coming down from Illinois, Wisconsin, Indiana, Michigan, Iowa, and the Dakotas heading to points south and west to escape the coming winter.  The road through Oklahoma is now called the Will Rogers Memorial Highway and as he was from a town northeast of Tulsa, he undoubtedly traveled it many times.  Many have traveled the route to California before us trying to make it big in Hollywood, but few did.  Even Oklahoma’s most famous native actress Joan Crawford didn’t take it to find fame as she was discovered as a dancer in New York City and had already left NE Oklahoma.  Famous singers like Toby Keith (my favorite C & W singer) went the other way from Clinton OK to Nashville but in reality, he went both ways playing the bars, honky-tonks, and fairs before they were famous.


The trip back from Chicago was delayed and our departure gate from O’Hare to Tulsa was changed four times.  It was 1 AM by the time we landed and walked to our hotel near the Tulsa Airport.  After we woke, we picked the dog back up from the kennel, and tracked down something for breakfast.  Near the dog kennel was a small manufacturing facility with the name Daylight Donuts on the trucks. 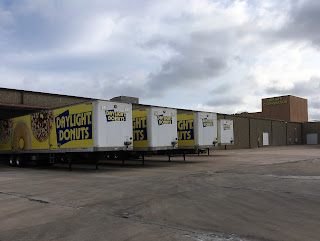 It turns out upon further research the Daylight Donut Flour Company has been around since 1960 even though the company started in 1954.  The founders, a couple with the last name of Day developed a light flour recipe for donuts.  59 years and three owners later, the company now has over a thousand outlets and seems to be expanding. 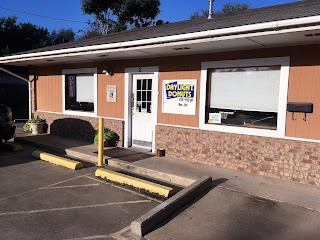 We tracked one down which looked like the 1980s were calling and the small shop out in the middle of nowhere on the edge of Tulsa reminded me of the bakery in Frederic which closed sometime during the Clinton administration.  It wasn’t much to took at and the interior was no better.  We bought two donuts and two cinnamon bearpaws.  The taste test…it was a clean and light donut, not too sticky, and best of all, no greasy aftertaste.  It was okay!
Crispy Cremes used to leave a funny aftertaste before I stopped buying them.  The donuts at most convenience stores in the upper Midwest also have this after taste.  Two coffees, a bottle of orange juice and the four donuts, the cost…just $8.50.  Quality at a good price, maybe it was 1984?  Maybe Oklahoma is okay after all?
We drove on the famous old route through Sapulpa, home of the world’s largest gas pump, into Bristow, past DePew, and turned before we got to Stroud, where we picked our rig back up before continuing westward.  Stroud is famous for having, of all things, a UFO landing pad.  All of these towns feature cafes and old gas stations registered as National Historical Structures.

We took off and headed west down the Turnpike after driving through Stroud, avoiding a repeat visit to the UFO landing area.  We made our first mistake of the day continuing on the Turnpike instead of following I-35 into OKC and then turning on I-40 west.  The second toll booth on the Kirkpatrick Turnpike was exact change only, we caused a back up and then finally throwing $3 into the change hopper it never gave us a green light but we drove on.  It was impossible to do this from the window at my rig.  I had to send my wife outside.  The woman in the other lane parked her car and walked out into our lane to use the change machine.  Cars were four deep when I drove off and I could see her first dollar got caught up in the wind and she was chasing it.  Why not have a manned toll booth here when the first one is manned?  Why not warn trucks and tourists to stay off this toll way, at least give a credit card option for trucks.  My okay verdict was being negated.
After bailing out at the first road, old highway 66 again and looking in my rear view mirror for troopers, we finally found a way to get on I-40 and continue the journey.  I suppose I’ll get a fine from the mail.
I pulled off the interstate in Sayre, heading for our next stop, a very late lunch at a second Punjabi truck-stop, the Highway 40 Truck Stop.  When you think of Oklahoma I'm sure you think of donuts and Indian Cuisine...right? 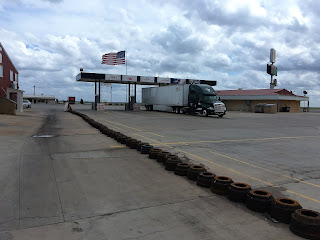 The line of old wheels dividing the truck stop from the restaurant.

I also needed diesel and turned in towards the pumps.  It seemed easy enough but before I could do anything about it, I either went over the edge of a curb or a speed bump.  Afterwards, I couldn’t figure what it was doing there.  I wasn’t moving that fast but when the bump hit the rear tire on my side the interior compartment of the rig was tossed violently and I heard  a huge crash.  A cupboard full of dishes lay scattered on the floor.  Potato salad in the fridge was ejected from the fridge as was a bottle spaghetti sauce didn’t bounce.  It was a disaster of broken glass, china, food, and non-broken stuff.  After making sure all the pets had avoided the carnage we started to clean up.  One of our cats was lucky he was in a kennel.  The worst was the freezer door wouldn’t now close properly.
After cleanup and fuel, we decided at least to give the food a try.  We went in what looked like the restaurant and tried to order, but the guy took one look at us and said, “no for you, other place.”  He headed out the door and then led us around to back.  I wondered where we were being led to.  I guess goat meat is only available outback.  Apparently, we were pegged as meat eaters and as such, we were offered the Goat Meat shack in back. 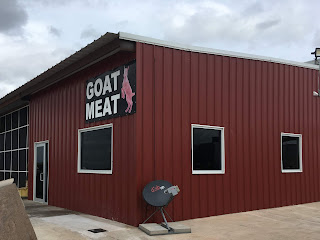 It was good third world curry, bones and all.  When we wanted a diet coke, he walked over to the trucks stop to get it.  I must say though, all in all, the food in Nebraska was better, and I’m not sure I’d stop here again, mostly due too many painful memories over the speed bump.  These truck stops still made me wonder…
Twenty-four miles later we left Oklahoma and entered the Texas panhandle where it decided to rain, and I guess that is all I have to say about that. 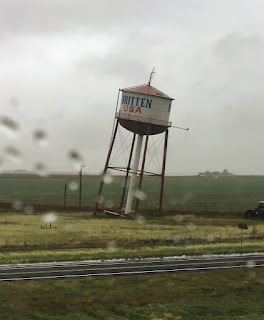 There is the “Leaning Tower of Texas” in Groom, but, well, that is a story for another bit of prose.

You see a lot of odd things on the road when you drive, odd signs, odd people, and odd weather, and sometimes you see odd things on RVs, this picture says it all 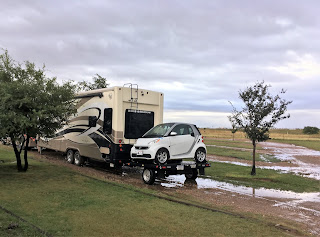 We got all the way to Sun Valley Arizona, a town that had seen better days
and camped literally a few feet off the old Mother Highway where so many came 70 years ago 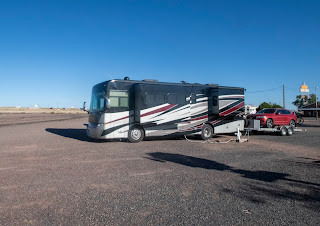 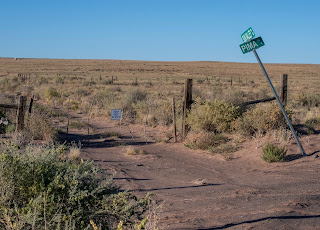 So Route 66, Donuts, Goat meat, leaning towers of Texas, gated villages, and open spaces and lots and lots of species of butterflies, next stop Phoenix just a short turn south off old 66

Butterflies: 15 lifers, here are a few pretty ones, I'd seen the buckeye before 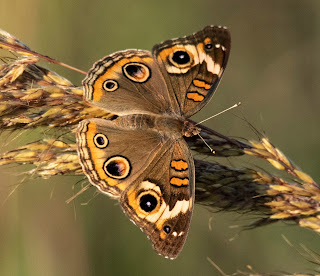 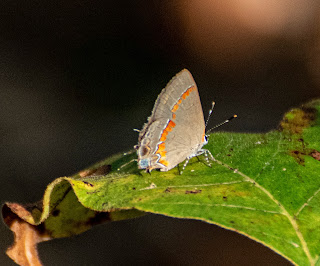 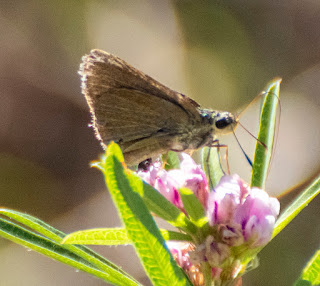