THE HUNT FOR THE LUTHERAN SPARROW 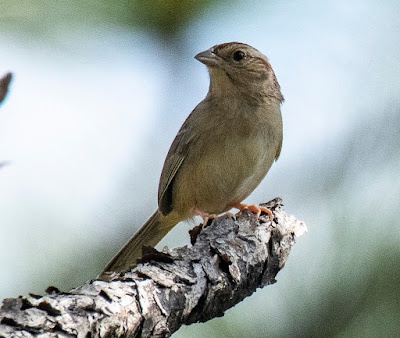 Birding in the time of the Coronavirus, is not always simple or productive, especially if your are stuck somewhere that isn't particularly birdy.  Today marks Day#12 for us in keeping ourselves in Social isolation, maintaining our social distancing, which I started when I flew back from South Dakota finishing up some dental work.

No matter where you are, there are some odd, hard to find, or unique birds flying around.  I am waylaid in Pasco County, Florida.  Living in our RV isn't so bad.  We get out every morning on our bicycles and can sit out in the sun, we are just doing it with a ten foot distance limitation. 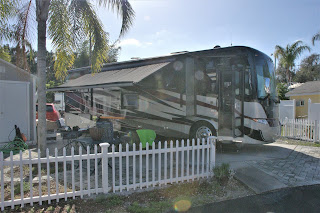 Today's excursion was the hunt for what I call the "Lutheran sparrow," actually named Bachman's sparrow, an elusive little beast, uncommon, and sporadically living in the open pine woods of the southeast.  Not well researched, this sparrow is named after the Lutheran Minister, John Bachman, who was from Charleston, South Carolina, and besides being a pastor of a large congregation was a social reformer and abolitionist, and was a naturalist discovering one of the two birds which bear his name, the Bachman's warbler, probably now extinct, and Bachman's sparrow which was named in his honor.  Oddly, the man who preached and wrote papers on the equality of slaves as there was no difference, was beaten by Union soldiers of all things which kept him mostly out of the field for birding for the rest of his life.

Another interesting fact was that Bachman was married to wildlife artist Maria Martin, the only woman who assisted Audubon in his work and painted many of the watercolors of his The Birds of North America, and then in the 1840s The Vivacious Quadrupeds of  North America.  I mentioned her in my Art History senior seminar presentation back in College.  That is another story.
This near-threatened species of sparrow is a rather plain bird with a very pretty song, sounding a little like a cardinal, assuming you can find them and they are singing.  This bird was never very numerous in the southeast but after much of the area was cut over around 1900, the bird expanded but as the large pine forests have grown back, the sparrow's range has contracted accordingly.  Much of its habitat in Florida has been removed for housing when instead of leaving some scattered pines standing, the developers tend to clear large tracts and plant trees later.

There is a large tract of wooded area called the Starkey Preserve not far from us that has these sparrows and it has some perfect habitat but finding this bird is NOT easy.  Today, having not a drop of Irish blood in me, I spent the Catholic holiday of St. Patrick's looking for a Lutheran sparrow.  Something seems strange here but I wore green, though, so I guess I did my part to celebrate.
The project took about five miles but then in the distance I heard one and took a left, and then heard it closer and then after looking hard, I spotted it up on a pine, singing.  It wasn't a lifer, not a state bird, not even a county bird, but just a tick for the year, but it was fun and something to do.
There is a healthy population of brown-headed nuthatches around this area as well, giving the searcher a bit of a bonus bird. 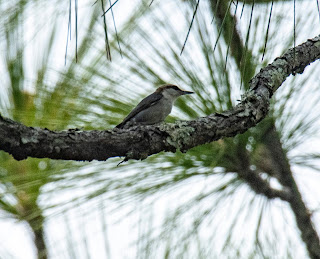 Unfortunately, our daughter is now back home as residential college life is now determined to be too risky for COVID-19 and it is true that we all need to avoid any contacts for a few weeks to stop this virus, and she was sent home yesterday.  It has been eating at my wife to be 1780 miles away from home and everybody, and even though we can't visit our parents during all of this as we'd risk possibly infecting them with something that could in all likelihood kill them, I also agree that it is better to be closer.  Hard not to feel isolated down here and it is also easier to maintain sanity for self-isolation on a ranch than in a 34 foot RV.

As  such, we are bugging out of Florida on Thursday, a month earlier than planned.  I had hoped to knock off a bucket list item (visit South Carolina, my 50th state) but alas not this time.  With our only points of contact being three diesel pumps, we'll avoid humanity as much as we can as we are pretty self-contained, so we should be pretty good.  I had always wanted to spend an entire spring migration in Florida but for 2020 anyways, it is not to be.  Trying to survive and keeping this epidemic spike as flat as possible so everyone lives is a better idea.

Last year, today, we were nearing Tristan da Cuhna on a ship, if we had been on that boat this year, we'd be a ship without a point to land as almost all transatlantic ships are in quarantine or ships without a port.   Scott Schuette, whom many of you know from St. Paul, is aboard a Silverseas ship The Silver Explorer in limbo off  Chile and in quarantine.  Scott is virus free so far, thank goodness, here is a recent story.

So things could be worse than being able to bird in Florida and drive home in a Tiffin RV?  Yes, they could.  Remember, that even though we wait patiently for this virus to pass there are some birds out there and more coming, so be patient and keep the bins ready.