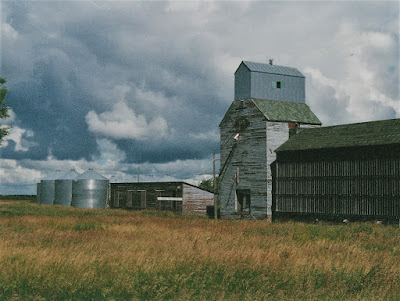 I got a call today from a person in Ree Heights, South Dakota.  I answered the call, "What the hell do you want."  I was hoping this call had a person attached, hopefully someone from Bangalore or Philippines, but unfortunately it was just a computer.  How did I know?  Ree Heights is a small town at the crest of a little hill heading west  10 miles from Miller, itself only about a thousand people, and Ree?  Its population is 62, and in my opinion, that is generous.

Back a long, long time ago, I fell in love with what I called the skyscrapers of the prairie, grain elevators.  In the mid-Eighties, I took the above photo of the grain elevator along the ex-Chicago NW track, (now Soo Line) that still runs to Pierre.  I remember it being a hot day.

Ree Heights is a town named after the Arikara tribe, who were featured in the Revenant movie (means one who returns after being dead or from a long absence)  about Hugh Glass's life, his wrestling with a Grizzly bear about 200 miles west of here.  The site of the fight is actually a favored Spotted towhee spot for birding, not far from a Baird's and Sprague's hotspot.  I've written about him before, Glass was a bad guy IMHO.  The Arikari  were so affected by a smallpox epidemic in the late 1700s and in that the 34 villages along the Missouri River were reduced to 2.  TWO!  In this time of epidemic, we should think about the Beast (want many call the COVID-19).   Things are not THAT bad.

The town was formed in 1882, and it took 136 years before the city issued its first liquor licence back in 2018.  As far as I can tell, that is about the highlight of this small town besides be a popular exchange for telemarketers and scammers. 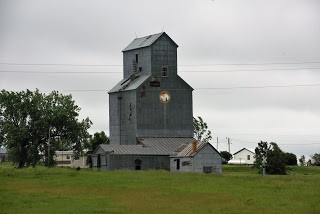 Not all that far from the battle of the bear by Hugh Glass is Morristown, South Dakota, also a town of 62 people.  I filmed this grain elevator last summer.  One of the more interesting things here is the bank in Morristown printed money back in 1910, trying to support the nascent local economy.  A souvenir from another era worth more than the grain elevator now is.  Do you think in 1910 one could buy a grain elevator for $10?

Morristown isn't much now, but honestly back when they were printing this money, it wasn't much either, so even if times are tough now, they have been tough before.  Like America, things will get better, they have to

Thinking of the prairie and elevators makes me forget what is going on in the world.  I found this photo today, too.  I've taken many photos of the elevator in Grenville just recently torn down. 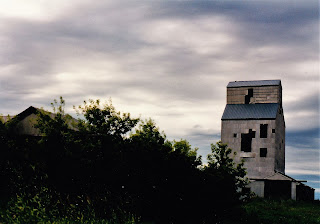 Grenville (pop 54) is a town in Day County, up near my cabin.  I took this picture 2001 or 2002.  Grenville is a strange little town in that it was platted to be something sizable, and even in the 1951 Soo Line Annual report, the railroad lists Grenville as an industrial center akin to Duluth or Minneapolis.  It has always been the end of a rather tenuous railroad connecting such hopeful places as Eden (pop 80), Lake City (pop 50) and the biggest Roslyn, maybe 200 people and the World Vinegar Museum these days.  This line after a good 3 hours of being on the railroad ended at Fairmount, North Dakota, still a long way to anything.

Beginning about 30 years ago, Waubay Lake became a beast of its own, growing from 8 to 27 square miles in size, inundating pasture, farmlands, entire farms, a national wildlife refuge, roads, and even, almost the city of Grenville.  This is a large basin like the one in Devil's Lake that doesn't have a natural outlet, so the water just keeps rising.  The area does NOT drain to either the Red River Valley (on to Hudson Bay) or the The Missouri River watershed(Gulf of Mexico).  The water stays.  At one point before the third raising of the roads, almost cutting off the town of Grenville entirely. 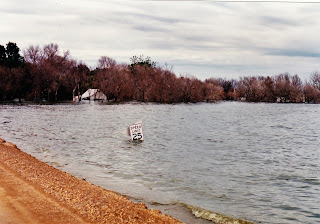 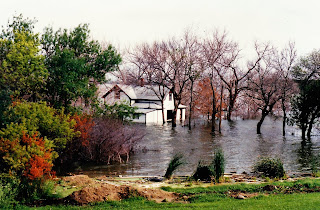 Before you get out there and complain about global warming for this slow moving catastrophe.  Grenville was settled in 1914.  The two smartest people in Grenville turned out to be the Catholic priest who picked the location for the church in town, and cemetery, both on top of the hill.  The over genius was the chief surveyor for the railroad, who put in a line of course now pulled up that still has never gone underwater.  He knew something, he planned ahead and knew something about the cyclic life on the prairie.  You see, this water level, has happened before. When they built Fort Sisseton just northwest of here in 1864, they placed the revetments at the water edge.  The 1860s-1890s was wet and the last time I was up there these earthen revetments were still a few feet from the water.  So the basin isn't even full yet.  Obviously, the guys who built the railroad did their research.  It went down, at the turn of the century then up in wet Twenties, then down in the Thirties hitting the recent nadir in the Seventies.  Global warming?  You can blame the Winter of the Blue snow 1886-87 (worst winter in the prairies) on Krakatoa, You could blame the winter of 1996-97 (the second worst prairie winter in recorded history) on Vatnajökull  the Iceland volcano that erupted in late 1996, but the relationship to that volcano is not as close and both years were solar minimums and well, who knows.  They were bad winters, everything flooded and many people and animals up here died.  When I was born, 20,000 sandhill cranes were killed in a prairie blizzard the next day.  You could just as well blame that on me.

The nice thing with all of this water up in the Coteau (The hills of the prairie) the name for the large terminal moraine, is that there is lots of water for ducks and muskrats. 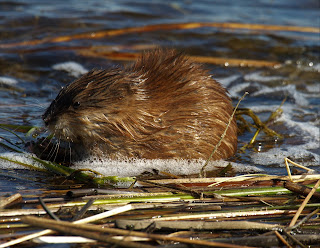 northern shoveler and a pied-billed grebe 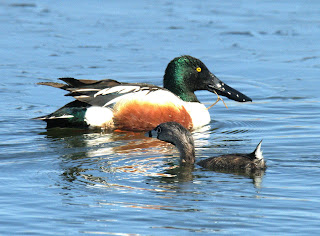 So, things go round.  The water levels, and epidemics.....luckily, COVID-19 isn't a real killer like small pox, imagine 90% (or more) of everyone you know dying.....just imagine the Rees, those luckless prairie nomads, the Arikara....I think I'd rather be Hugh Glass and have to fight that crazy bear.

So we still got some American Tree Sparrows hanging around 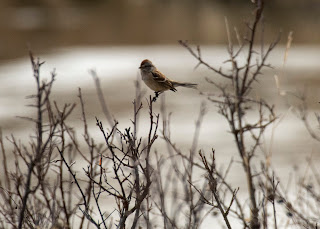 I bet a flushed 200 song sparrows this after noon walking fence lines. 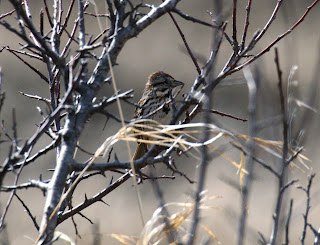 so migrants are coming back, they come they go, the economy booms, it busts, we live, we die, and the sun goes round and round, I guess.

I even saw a golden crowned kinglet 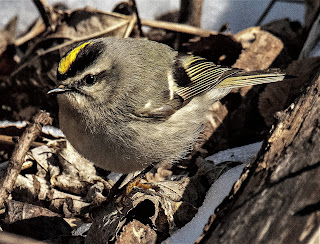 It's hard to be sad thinking of kinglets, they are so fun, so uplifting
well, my family is all doing okay, my daughter holed up with us in South Dakota and our two sons in Madison.  I checked on my parents today, shut in the woods of Northwestern Wisconsin, isolated from everyone, deer, squirrels, and such, they are happy the ice came off the lake.  The Passion Play in Germany, a decade event in the Alps designed to celebrate being saved by the Plague, was cancelled due to this pandemic, and as such so was their trip to Munich.

I'm thinking our ice might go next week, with the wind and the two day warm spell we have, but it was 11 and snowing Friday.  Our hot tub is making sounds like a flying drone but it still works, it is about our only distraction.  Tomorrow will come and I guess I will wake up, but that is the only agenda.

Stay safe out there