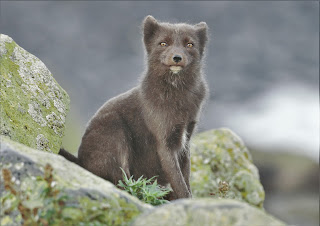 This is the evening report from St Paul Island:

the high this week was the winds with some days the speed in excess of the temperature
the low was the morale of the birders here looking and hoping
the pressure is high on the guides to keep the birders from considering drastic measures--like leaving, jumping off a cliff, or heavy drinking

But well, it just seems like this fall birding strategy is going to last the rest of my life....sigh, you know, I did see a year bird this week....and it could be worse, I still could be in Gambell, they've seen even less than here...and the weather is hopeful....

AND THERE ARE NO BEARS HERE!!!!

Well with all the bears around, I just decided to drive to the airport and leave.  My flight to St Paul left at 1215.  PenAir came in on time, I got out, we loaded up the group and 45 minutes later we were stomping the lake with the Jack snipe and 5 minutes later  "snipe"  I had bird 759 but no picture, Scott didn't want to overflush the bird as many more were coming in in two days.  I could say more but well, it was a bit lackluster and not very thrilling

I got settled in, got some beer, and we got ready for days of birding...
this is another marathon location, I needed to pace my emotions

Another day, another day of birding...I hiked, thought a lot

then I did a lot of hiking, we ate,  and then a lot of contemplating this silly year and my life, I rarely said anything, no one talked to me, did I say I hiked? 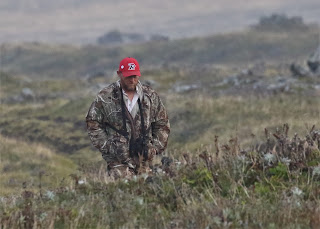 We drove some putchkie saw an interesting bird that got a way from us at dark....nothing new and that was probably a Lincoln's sparrow

I don't know, I'm not sure I should be hanging out with birders 24/7...I tried a little to talk about TV, no one had seen Game of Thrones except our guide Claudia, other shows...nada....sports?  Nope.  I gave up, all they wanted to talk about is birding.....well their birding....I've been birding for 9 months...I've kind of been there

that was my only answer to my questions, was I need to go home

Again, bad prevailing winds....no birds then a larger group of birders arrived, including Barrett Pierce another biggie in the realm of ABA birding probably in the top 10, but Barrett only counts once a year, and he is another nice guy from Amarillo Texas.

Immediately we went out to look for the Jack snipe and it was within 10 feet of previous flushes,
this time I got photos.....all in all they were not bad. 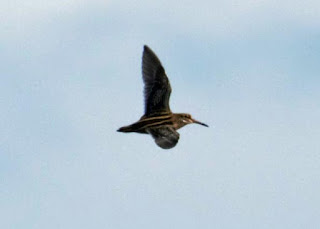 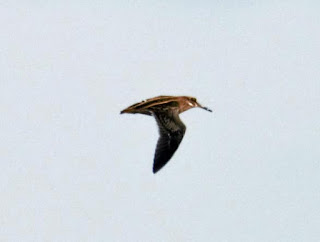 A tough bird as you about have to step on it to flush it and it is very cryptic...rarely seen on the ground

but as we went around to find stuff we really didn't see too much, largely except for sparrows nothing that doesn't breed here is even around... 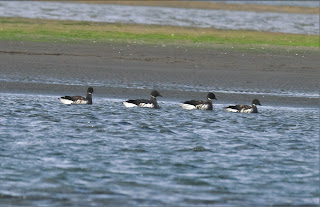 
We worked hard, continued to hike around looking at crab pots 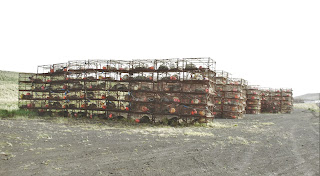 we found an adult slaty-backed gull on a beach 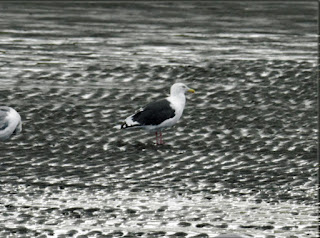 I spotted a nice king eider in the salt lagoon... 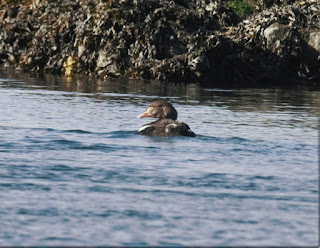 but that was the extent of the day...a good day birding but nothing new and nothing from Asia

We left jack alone....and I was beginning to think I didn't know jack...about birding or anything...still no new birds on Gambell though so that was fine to have left.

It was a morning fit for sea watching as it wasn't easy to do anything else birding and now I was sure I didn't know jack this morning... 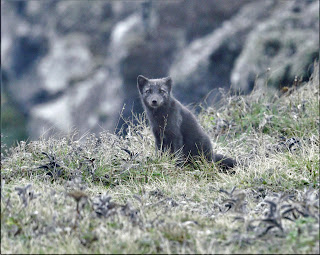 I came back and everyone was giddy in that they had a close fly-by of a short tailed albatross only the fourth time the bird had ever been seen from land ...wow!  ...and I missed it,
jacked!! 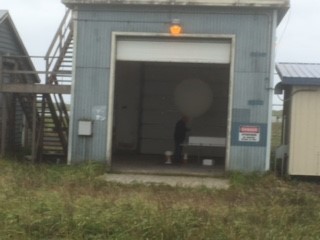 They launch one every twelve hours, I tried to get in in flight...and I missed
sort of like my bird photography

We went and picked up David Greening a birder I had met in Minnesota earlier in Florida...ah someone to talk too....I know Minnesota.   We went for the jack snipe and worked at it hard, checking every local swamp and marsh...no jack, but with the wind...? 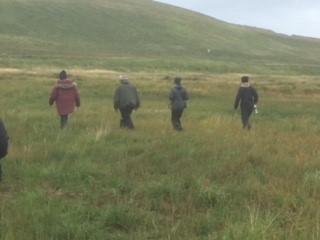 Maybe Jack was lying low...but it didn't look too good....glad we got it earlier, sorry David.

I have spent many a week on St Paul and I have never seen reindeer but after today, I can't say that anymore.  We went to seawatch at SW today and 45 minutes after arriving, the weather turned, wind shifted west, and with it hope.  On the way back, I tallied the reindeer herd, check! 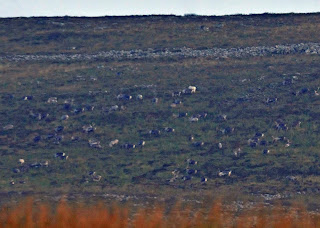 The lumps are reindeer, really...

They are not native but well, they are established....I saw the same species on Adak so not even a year mammal then...but I was happy

There were no birds on the island, flying by the island, on the island it meant for a long day.  We ate, watched from the north beach where we did see an albatross sp. unknown as to which of the two it could be it was dark brown and big, either a black-footed or a short-tailed albatross juvie bird, four at least saw it and with the sighting the day before it was probably a short-tailed but I left it unknown on my list.  A designation I may never use again...albatross sp.

We saw a shrew and hoped for the winds to blow and bring in something from Kamchatka, time will tell....

wish I could have seen the albatross better but that is birding...

Seal, it's what's for dinner! 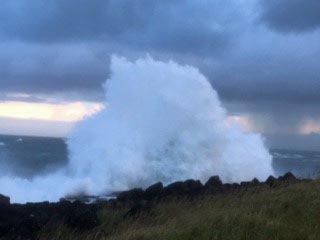 They were impressive hitting the rocks

I got bored and then we toured the village and we drove past the rental car center, well I don;t think the old pickup runs... 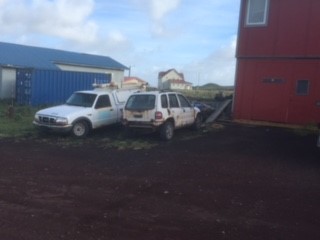 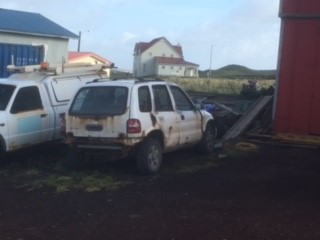 It is the same rental car I've featured before just $10/ day more and it has a lot more rust and a better view of the roads...through the floor boards....it is still missing the back bumper, the rust is the only thing now holding it together.  $100 a day...you decide

The birding continued as we cleared the island of having any new birds early today, there was no albatross fly overs, nothing, not even a sparrow, but....

I finished seeing all of the mammals on St Paul in a trip consecutive days, seeing both Pribilof shrew (Barrett Pierce took this picture) 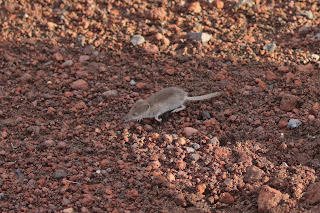 they are quarter sized with a long tail, if the boreal owl is still around just a midnight snack even for that

I saw the arctic fox....again 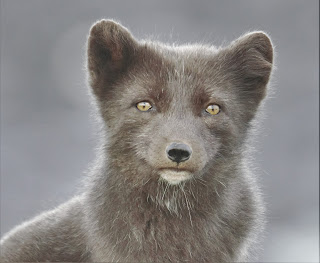 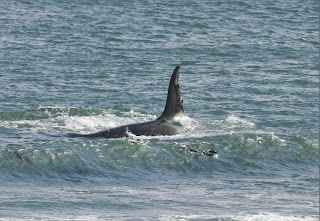 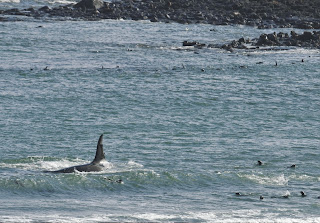 watching the killer whales eat made me hungry, so I went to the Trident plant to eat. 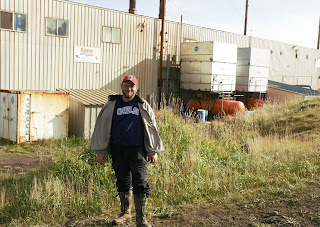 It was the best meal ever, but it wasn't seal, it was curried crab.

After 3 days of stomping every marsh I can say that the island is jack snipe clear...it is safe for the rest of us

Well tomorrow is the last day of summer....we do have favorable winds so there is hope that something is coming, otherwise if I have more days like this....I may snap

insanity is doing the same thing every day day after day going out and expecting different results....
basically now, five weeks of the same....at least I got Jack

thanks for your support