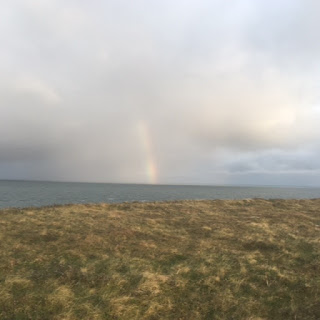 Let me start off this blog by saying, the 24 hour rule bites, it blows, and it even sucks...there ain't no pot of gold at the end of my St Paul rainbow...okay, it wasn't the end of the world and if I think about it, who the heck else would this happen to, but me, fat, dumb Olaf.........yup...me.

Okay, let me get to today.  I got nothing to say about the last two days on St Paul, okay, I took a pretty fox sparrow photo, or two...to date the only bird seen on Putchkie by me that actually doesn't live on the island, well except for a rather sickly gull which may have lived on the island, IDK 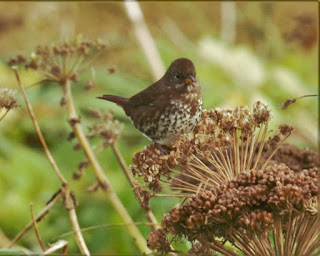 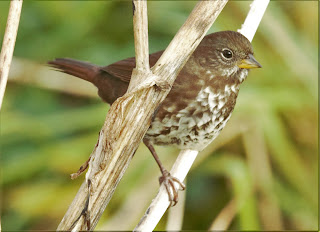 There were reports of a possible Eurasian sparrowhawk on Adak but that plane left Thursday and well if I was going to go there to get it I had to bug out of St Paul on Friday and fly to Adak on Sunday, but that was not my plan and well, going there for a bird that may not pass muster with the state committee or the ABA was not a good idea since there is only two flights a week and the next one is Sunday, and I'd be stuck there until Thursday....but I had had enough of St Paul, someone needed to take it for the team and leave, as then the 24 hour rule kicks in and since I had been in Alaska for a whole month plus three days, that person needed to be me....I was the dark cloud casting its shadow creating a terrible fall for birds...The 24 hour rule states that if you leave a bird you need will show up within 24 hours of leaving....the question is who needs to go?

I needed to see my wife, my family, my new kitten....the whole gang has been treated for giardia thanks to the kitten, a very odiferous little kitty but alas everyone is being treated, healthy now hopefully.....My sister had a baby I need to see, I need to do my grandmother's taxes.....heck, I need to pat my dog and well, a certain booty is calling..........sigh, rocks were looking like my wife on St Paul....I'm so sooooo lonely.

Yesterday I bugged out, it something that only made sense to me but i had to go... but not before the Olaf effect started....a Eurasian skylark was flushed off the road on the way to the airport...I saw it well, not a year bird just a USA bird but was it the vanguard of something?  It was a good look but not a photographable bird but was seen by everyone in our van.  Thinking about the vanguard thing...I hoped not, but well, I had to go.  Nothing was going to come in....

I flew to Anchorage and well, I had no hotel, nothing....but then there was a report of a bird in Arizona I needed....I checked Alaska and Delta, both had a seat on an overnight until I called...then poof............gone.  It was an omen.  I got a room at The Coast Inn, it was so cheap it had to be a mistake.  Sigh....then on my way to Seattle on the 9am flight.....the NARBA alert came out...Dusky warbler in San Francisco, and not just in San Francisco, as close to the airport as any place to ever get a bird could be.  I am a wiz at changing things on the fly in an airport...this was easy peasy for me, and SFO I was now heading.

I talked the woman at the Delta counter to switch my ticket to SFO and she did for FREE, then she moved my suitcase.  I decided to buy a suitcase in Anchorage and put my winter jacket and boots in it as I was too cheap to just ship it home, so I checked it....Olaf, checking luggage has cost you...why why did you do it?  What bird could show up?

Then woman told me the bag would go to San Fran....when I checked enroute over Oregon, I saw it was going to San Diego.  I didn't worry about that and on landing I blew out of the airport to the train to get a car.  It is slow at San Fran, the train takes forever and the rental car place is weird, luckily I am Hertz gold and just drove it the 4 miles to the stakeout I had two hours of daylight left.

Okay, as stakeouts go this was a little weird.  The bird was in this fennel patch on a side hill between an Inn and a UPS warehouse.  There were a few birders below and a few in the middle, some sitting, some on their bellies, and the last view of the bird was just before I arrived. 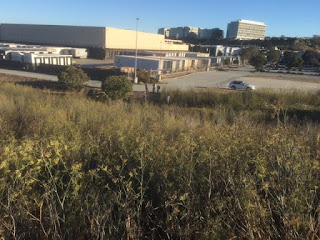 I took a spot and watched.  It had been feeding in an 80 foot circle all day, but never seen well.  People tiptoed into the fennel like they were on eggshells.  In Alaska, someone would have just said heck with it and would have just walked through the stuff, back and forth until the bird flushed and was seen by all, here, that isn't considered ethical birding so we waited and watched, the sun sank....then I heard it.  YEA!!!  I thought I saw it but then a flock of bushtits flew in...drat. 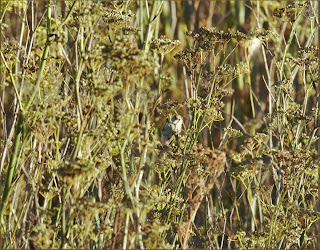 Now every glimpse of a bird had to be checked for being a bushtit, and then it happened, the dusky warbler showed and was deep in the fennel and intermixed with bushtits...I couldn't get on it, then the next time still no, it called again, they guy in front of me had it and I looked over his head and him over the guy in front of him who had it, but not me....but if you took your eyes off it, you lost it, then it flew down, I saw that, then I saw the ass end of the bird, brown, buff under neath, that was no bushtit, then a wing...no wing bars...then the back end again....finally as it was going dark, the hoard of tits came by and then I got on it, again, three deep looking over the head of the guys in front of me.  I saw the eye line and the brown eye brow...dang skulky phylloscopus warblers...DUSKY WARBLER  TICK!!   .I had seen my first in 2014 on St Paul but it was like this view only in flashes of it flushed, multiple times before Doug Gotchfeld got it on camera...I never could catch it on the camera then or now   and this time, 15 birders, most saw it, nobody could ever have hoped to photograph this bird, but I had bird 760.  Some you just cannot photograph.

I saw it again and then chatted with a local birder until dark, surprised at meeting a big year guy, (there aren't too many birders with Olaf monogrammed on their shirts) he had just read Neil's book so there you go Neil, a sell!

I was feeling good and then...I checked my email....not one bird I needed was seen today on St Paul, not two, but 3..........I fell over on the hill, coughing, ugh, why me?  Why??
I felt like Hillary Clinton cursed by something.

The guy I talked to told me a tale of a jaguar killing a bear on the Santa Rita mountains....that cheered me up, those damn bears...way to go Jag!!  First ever documented killing of an adult bear, a 230# sow, sweet revenge from last month.  But where I should feel jacked at the dusky, I felt jerked,,,,a blue tail, a yellow-browed warbler,...Brambling....crap....okay, I got a consolation bird and a good one at that but why does this happen to me?

Too late now, at least I didn't go to Arizona, and so now how do I get ahead of my bag, I tried to forward it to Minneapolis but I may need new winter gear, if it doesn't show...San Diego...why did it go there?