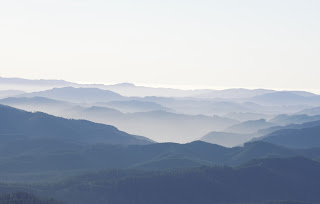 The waves of mountains and fog!  I like this picture.  I found myself returning to Oregon, and chasing a bird I seemed to never be able to see, at least this year, the brambling.

As I believe I already mentioned, I lived for six weeks in Portland in 1991, training at Oregon Health Sciences.  It was a trip of stories, involving: getting lost in Wyoming in a wilderness, the second part of my Cody-Grizzly Inn story (read my book), picking up a screw driver in a tire in Idaho, staying at my brother-in-laws, an attempted motel break in on Sandy Avenue (my wife and I hiding under the bed), an odd Llama Ranch B&B under Mt Adams, a terrible learning experience at OHSU (when I presented my final paper my adviser stopped me saying, "Did you just start?" I had worked with him for 6 weeks and he forgot I was even there...), Narrowly avoiding getting run over by a logging truck in Idaho while sleeping under car, and my lifer Long eared owl in Montana.  It could have been a great summer of vacation but I ruined it going to Portland! But I have out sized memories and stories for such a period of my life.

I do always learn something in Portland.  That is a good thing, I guess.  Today, the big discussion was that the millennials don't use fabric softener.   Proctor and Gamble sales of the stuff has fallen 100 million dollars this year.   P&G wants to rename it from Softener to "Conditioner."  They think that will help.  The radio personality, discussed various reasons including P&G assumes they don't even know what it is.  These people discussed that maybe there was some environmental reason behind the avoidance but I agree, they don't know what it is....really what is it?  What does it do?

The discussion went on to remind us all of the Snuggly soft bear, and then how the DJ had tied up the arms and legs of her stuffed animals as a kid to subdue them when they came alive each night...trying to kill the members of her household...then luckily, and thankfully, I was in Florence, OR and it was time to bird.

It took me a while to find the location as there were at least two similarly named and numbered streets near Sutton Lake but I found the person's yard where they had found a brambling in the Christmas bird count.  Another birder had beaten me to the stakeout and so together we waited, and waited.  I sat on a retaining wall and watched a rather unbirdy bird feeder.  It took an hour and a half for juncos to show.  First one, then five, then 15, and then...Steller's jays came and everyone left.  Dang!  I spotted an Anna's hummingbird....??  That seemed odd, until the local birder said they winter here. 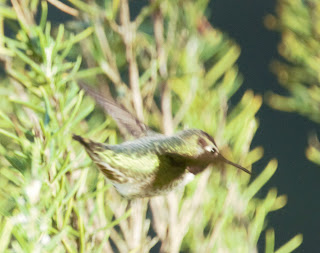 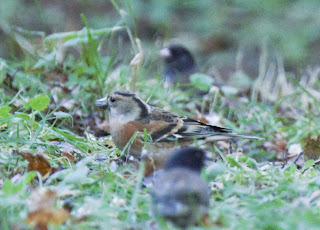 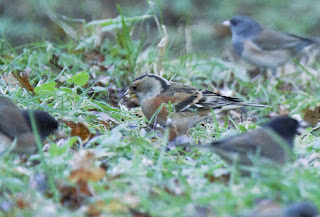 Brambling!!  Bird 775 plus (+2), yeah, a monkey was finally off of my back.  It wasn't a great photo but well this was like my 200th brambling, but it was a photo and I should have went and got the Ohio bird and then how I missed one in Alaska was beyond me, continually wrong place wrong time...but this is a needed bird no more, week 51, is better than never.  Branbling...TICK!!  All three of us saw it in the grass and then...Steller's Jays showed up and poof, juncos and the brambling...all gone. 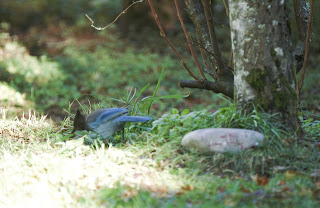 But I had it.  I decided I had been shivering enough so I drove past a pretty section of Oregon's coast 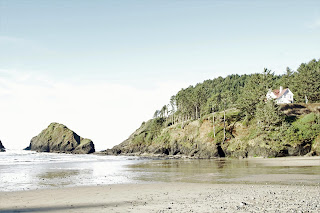 Then I drove around Mary's Peak area west of Corvalis looking for my USA nemesis, sooty grouse.  The roads were a little scary as they had a recent ice storm and the roads had some ice left on them. Then I drove past a female grouse, almost forgetting what I was doing up there.  I did like a 20 point turn trying to turn the car around and try to get a photo.  I was careful on the narrow road to not drive over and lost the bird's location, I stopped and then four feet from my door, it flushed, no picture.  Isn't that the way these go?  I got out up a ways and hiked a ridge for a while and flushed a 2nd grouse out of a conifer but had no more chance than just to see it.  But...I had seen my last missing USA bird.....the other Canada birds I had seen this year, are three rare actually code 4 vagrants....and one not even on the checklist, otherwise every bird I've seen has been in good old USA.  Neil Hayward missed 9, I was now basically down to 3, plus my huge Hawaii list moved my USA total up 2 to 826.  That is a number I am really happy with.

So, after crazy traffic in Portland, the worst traffic town in the USA, I made it to my hotel by the airport and sitting here writing this I am still wondering.....what really does fabric softener really do?  Conditioner?  That seems stupid.  Have we all been sold something the millennials have figured we don't really need?  Gosh are they smart!! Oh the things I learn in Portland.  This does beat the Bee funerals, I learned once here....Oh and I forgot my Naked wine bottle, maybe next time...

BTW, I am featured in the Watertown Public Opinion this weekend....Christmas cheer and Olaf, sit down and read it by the fireplace celebrating the Holidays.....maybe better add some rum to that Egg Nog while you read, but if you read this, you already know my stories, I write it here first.  In that case just drink, drink heavily.  Tonight is St Lucia's Night, the longest night of the year, hang in there, it will brighten up!