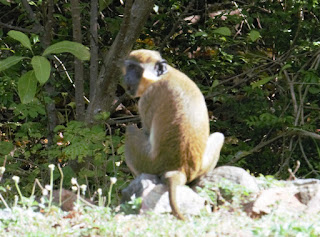 I spent last week on the "friendly island" working on my project, The Birds of St. Martin, French West Indies, a photographic guide.  With rare exception it was a great weekwise for weather, I got a nice tan, I drank too much, had a nice visit with many couples we knew from around Minneapolis, and I saw a whole lot of birds, some of which I needed for my field guide.

The cover is a work in progress: 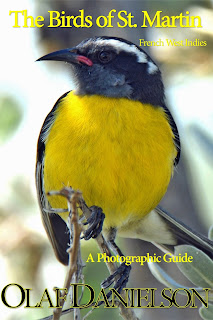 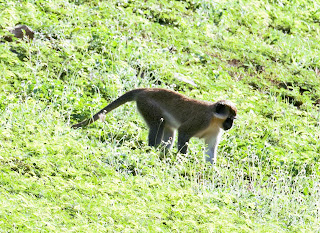 These are troublesome troopers, these damn monkeys, biting beachgoers at Dawn Beach, throwing poo at innocent hikers, charging people enjoying a breakfast baguette, and or generally making a nuisance of themselves, ...as only monkeys can do.  These guys are not native, here, first being "officially" reported by wildlife types in 2001, but they may have been here sooner and may have escaped from somewhere during the Hurricane Luis disaster, but no one is fessing us, most of all these crazy thieves. Luckily, my wife and friends didn't get harassed zip lining....them and I had more problems with ants.

I explored the entire French domain and I got some good shots of birds. 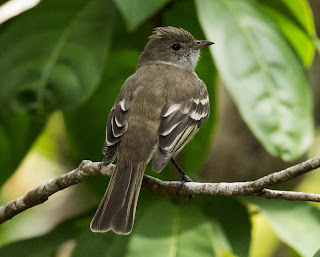 One of those Scrabble or spelling bee words, but this small flycatcher is not easily seen.

I saw a record number of white cheeked pintail, and proved they nest on St. Martin as I saw ducklings in a pond.  You know that with this duck it first appears that only males ever show in Florida but then being southern ducks, the sexes are the same. so those maybe aren't males...but the most handsome of all ducks, is this resident from the Bahamas through Argentina. 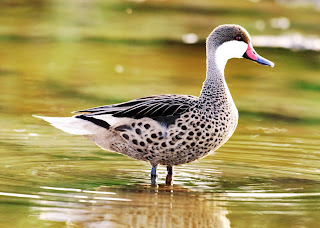 I spent a lot of effort looking for Caribbean (American) coots which are now not a species.  There are 300 at most on both sides of the island and they are wary birds.  I found two, which came back to this pond for three days and then disappeared and could not be refound.  I spent some effort trying to get closer but well.... 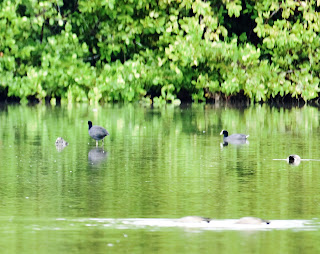 \
I needed a semipalmated plover picture here and found a flock of them. 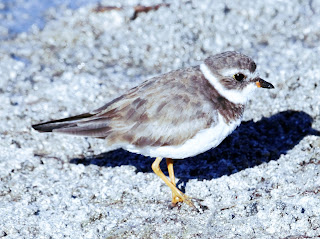 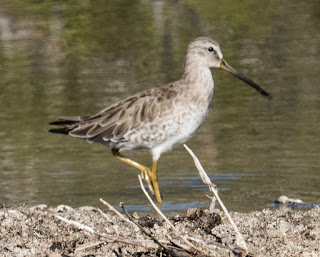 I found an enclave of Mangrove cuckoo, calling, and trying to get them out of the extremely dense cover, and well this one appeared momentarily, four feet dead above me, too close to get a quality pic, although I already had one, so no loss 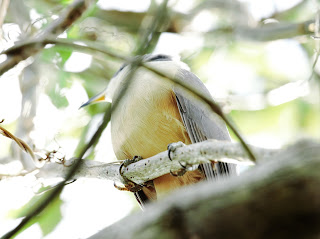 I got three lifer island birds and a ??  which was a great accomplishment for me.  My St. Martin list is not something quite like Paul L's Gambell list nor Scott S's  St Paul list which are something beyond compare, sort of Pete Rose's record or Cal Ripkin....Mine? It is sophomoric by comparison and I probably shouldn't even bother but I've got some good St Martin birds over the years, maybe someone has seen more than me, I don't know, I may have to add some old birds onto ebird and see....and sometimes these are even on trips that I'm not even really birding. 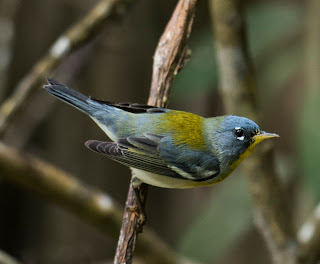 Any over-Gulf migrating warbler can end up here but I've never gotten a parula before, and unlike normal, it even posed for me.

I added a green-winged teal 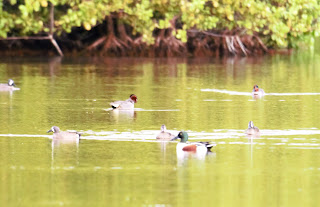 I know big deal right?  Which along with the northern shoveler isn't even on the usual French published checklist of birds on the island but I had seen one of them before in 2014.  There was a huge flock of blue-winged teal on the island this year that had moved into this pond apparently for the winter, and I suspect, brought some friends with from up north. 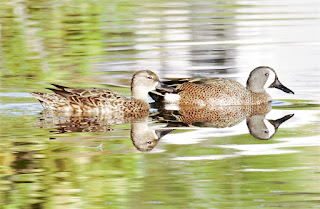 I thought I had all the ducks that could occur here, so another one....great!
I guess looking for West-Indian whistling duck will go on forever, so I'll keep looking as seeing one of them here, or even hearing one would be awesome!

In one of those odd birding moments, I  was saying goodbye to a neighbor when a purple throated carib came into his feeder at sea level, "was that purple?"  I shouted as it zipped off..."Yes," the professor answered.....

The purple throated carib is on the checklist as endemic but in 300 days plus here, I've never seen one, of the four eBird posts I've looked at, and curiously none of them are from up elevation where you'd expect this bird, as that is where it is on other island I've seen.  No photos have ever been added to these checklists, and I, for one, have been suspicious of these reports.  I had been thinking, even a few hours before this sighting, that they do not exist here.  This sighting by me and a professor of comparative biology in Canada who now both now have a sighting, has changed my mind....sadly my camera was not handy, and I may have gotten away with using it here at a location not approved for photography and by then we also needed to go.

That wasn't the strangest bird I saw, though, for just a hour earlier, I saw this bird, over the tennis court, and two hours before that, I flushed it off a powerline above the mangroves a few hundred yards from the gate of where we live.  I had flushed a second bird, over near the Butterfly farm five minutes before that.  It's like 'that had a white bar on the wings....?'  WTF? 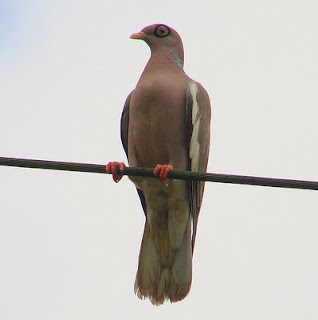 The second time was a good sitting look if only for a moment.  I may be mistaken, but that is a bare-eyed pigeon, so I say "WTF?"  Native of the A-B-C islands, Venezuela etc. but reported nowhere north of there, what is that doing here and....there are two of them.  Provenance?  There have been other reports this week, but what to do with this bird?  It could be here on its own, BUT..people keep pigeons, people release pigeons.  This bird was a true wild acting bird, all times I looked at it, and twice from almost 50 yards, very skittish.  This bird by its reaction has been hunted, flighty as ever, as bad as the wild scaly naped pigeons which I spent days trying to photograph in the hills, and walking looking, I barely did, one photo in 6 sightings. 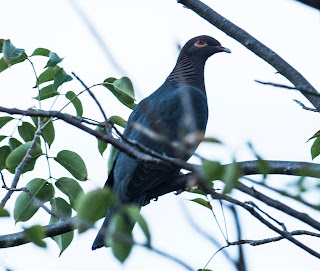 There is no local approval committee, so count, or not?  Until a couple years ago, 90% of the ebird lists on this island were mine,  so it not being reported here, maybe the French report it elsewhere...maybe worse for other islands south of here and this bird wanders....but I'm not sure....It acted wild, had no bands on it, and a pigeon from a few hundred miles is theoretical plausible, they got a white-crowned hanging around, and they get those flyiong through every once in a while.
so a ??? bird.  This would be a real lifer bird............

I did try to get a look at a scaly-breasted thrasher, and failed, only pearly-eyeds around the island that I could find.  The pearly-eyes have started singing, which also react to cuckoo calls, so I assume the two are here for the same purpose and cuckoos are utilizing parasitism of this species' nests. 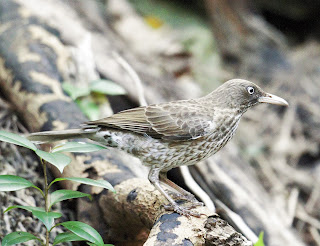 I hiked Pic Paradis, without getting robbed or mugged, unlike the last time I braved it up here in 2006. 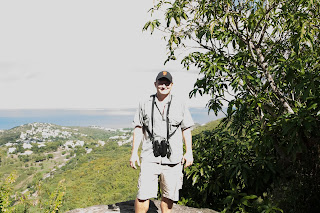 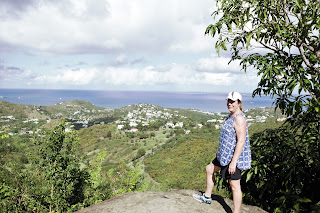 I did it twice, and the fear has gone, so I'll keep doing it.  The view is good and if I avoid monkeys and brigands, it is a good birdy place.

Some more birds from my great backyard bird count day, one man's yard bird is another's **MEGA**  (why do birders love the word mega?): 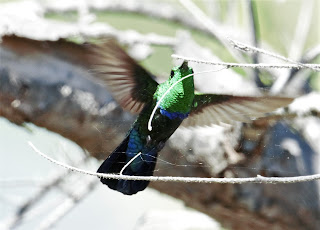 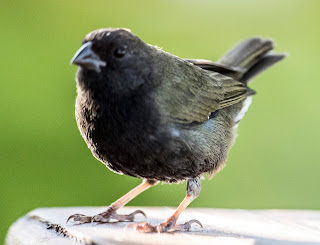 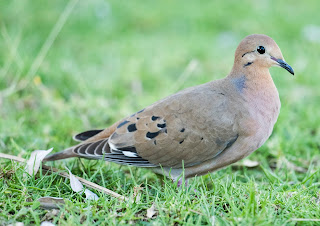 For a few cool local birds, ....we had a nice dinner party with friends at our place.  We worked on a plumbing problem at our rental villa, I didn't get hurt, I have no sunburn in any hidden locations, I wrote well on my field guide, and well...I avoided monkey bites.