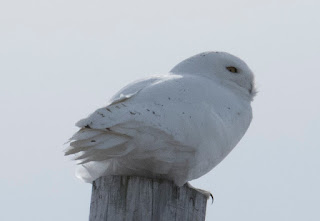 On Thursday I drove to Sheboygan, WI  to see a woman about her pair of great tits, and let me say it here, they really were great tits!

I knocked on her door and told her I was there to see her tits and she look out the window and then showed them to me...wow!  It was another item off of my bucket list.  I took a picture, so you'd believe me and then decided to go outside and check out a very large pecker.....

Wait a minute.  I'm not sure that came out correctly.  I really did see tits. 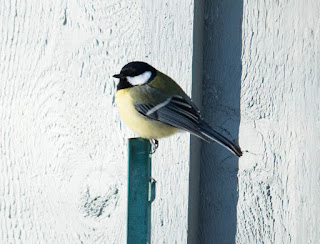 parus major, the great tit.  This is a European bird and one may ask....what is this doing near Lake Michigan in Wisconsin?

Somewhere in the end of the last century a person began releasing songbirds from Chicago.  These tits started finding each other and they began to breed.  The earliest I can find in the record documenting nesting was from Milwaukee county in 2004 although someone had seen them farther north and west earlier than that.  I guess the Wisc Checklist committee will have something to do. They continue to establish themselves, hanging out with black-capped chickadees, showing up at feeders and Christmas bird counts, and allowing people like me to use them in puns.

It is only a matter of time before this cute little bird will end up on the Wisconsin state list.
Then I can count it!

This isn't the oddest great tit report.  In 2016, there was a photo documented report from Cape Cod.  Okay, that was not one of these birds.  Then I scratch my head, why did that bird get a yawn from the birding community?  Could it have been a ship assisted bird?  I don't think it could have dispersed to here from northern Europe but a ship....where was NARBA or the rare bird reports?   This deserved more than a yawn, imho.  Oh well, the past, as they say is past.  I got this tit.

I also found a really cool effigy mound site with deer and other effigies in nearby Indian Mound park and I need to map these effigies better as I didn't know they were this far NE in Wisconsin, so I need to do more research. 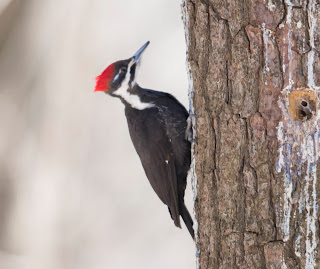 My pecker was a pileated woodpecker, year bird nothing more.  I drove to Ripon last night after my tit fest and met my sons and decided that even though this wasn't technically a life bird I drank a lifer beer none the less.  Leinenkugels dunkel! 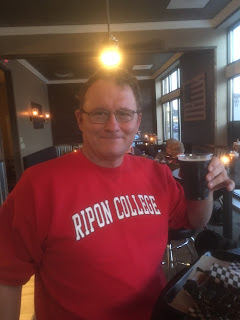 Today I gave a lecture in Ripon Ornithology Class about the perils of the Hawaiian birds and went over the ABA checklist and then to a large crowd this afternoon I presented my big year report.  The Green Lake Birding club and others were there in mass.  I had more questions than I've had at a talk in a while and it was generally fun.  Dr Khan was the gracious host and  interestingly Dr Skip Wittler introduced me by discussing briefly a paper I was lead author of on the Leaf-ling behavior of Buteo hawks, from 1995.  I forgot about that paper, that came off of my senior research when I was in school, and a student a few years later had taken up my project and continued it.  I stopped by Dr Bill Brooks, now retired, when I was out this way interviewing for Position in Appleton.  What a blur.  So learning that was kind of cool.   I met a couple of Blog friends and had a really nice time, thanks Ripon!!!  Thanks to all of the Ripon biology department for being so nice.  I was here last 29 years ago and many of the faculty are still here from I was here.

Between lectures, I went out to scour the countryside and bingo about 8 miles away....Snowy owl! 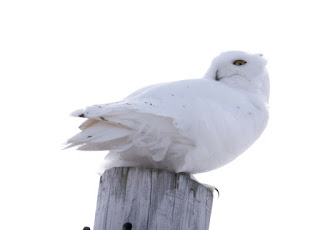 A nice very white owl.  It is good to know I still have it for digging up cool birds!
I also flushed a great horned over the highway so I had a two owl lunch, how great is that!

I went out with some of the local birding club members later and we chatted and had a cocktail and then  it was time to stop memory lane and drive home.  My goal in visiting was to see my boys before they graduate in May, they are off soon to start their lives, maybe thousands of miles away and well, it was fun to see them.  It is so cool having them go to where I spent 4 years of my life.

Well, it was certainly a hooters, peckers and tits kind of trip....did I really just write that?

Go Red Hawks!  I'm just out owling around in Wisconsin looking for tits....