Down in the Dumps 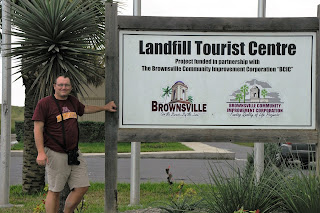 I told my family I was going to Texas to go get a bird, and when they asked "where exactly?"  I should have told them a recognized tourist center, IF, and that is a big if....you believe this sign.  Instead, I told them I was going to the Brownsville dump, nothing says travel "fun" than traveling over a thousand miles solely to go to a dump.

To a person, they all thought I was insane.  I think my wife encouraged my son, Tyko to come along just so there would be someone handy to commit me, but yes, I headed off on Sunday to the Lower Rio Grande Valley's most famous trash heap.

The bird?  Some call it a garbage bird.  I prefer a junk bird.  It is a bird that for the last 9 years had found itself on the trash heap of history, well so to speak.

I could keep you in suspense during this blog which will end up being the backbone of my column in the Watertown Public Opinion Thanksgiving weekend, but well, I won't.

Monday morning my son and I were having a bad day.  We headed off from South Padre Island to Brownsville to be at the dump at opening but we were greeted by the dump maestro at the main gate driving up in an old ambulance and came out to give us the once over.  He radioed ahead and we were told mud and rain made it closed to visitors for a while.  "How long was that?"  I asked.  Another guy got a little pissy.  Said he had came a long ways and I didn't mention my South Dakota start.  The man shrugged and drove off in the dump's 9-1-1 vehicle. 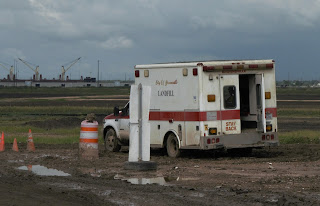 The other guy stayed, Tyko and I went driving to find other birds.  That seemed like a good plan until we got lost trying to get to Laguna Atascosa and then as their circle tour road is still closed since someone(s) killed two ocelot down there three years ago.  Apparently, they are moving the road a mile north.  We have had a new phrase in my family for a few years, "driving at ocelot speed."  This is a speed so slow, that if you'd hit an ocelot, he wouldn't notice.

This whole deal seems bizarre to me.  Moving four miles of road....Would it be cheaper to just put in 50 speed bumps?  Trust me, you put in serious speed bumps every hundred feet, no body is going to run over a silly ocelot.

Besides being the premier (or one of) wildlife loops in the USA, the issue with this was on Monday, that 3 crows were seen on Sunday, unfortunately 7 miles down that road.  To hot to walk although the woman at the Visitor center talked it up as doable.'  We then drove around, saw a couple of birds and narrowly averted trouble when a scorpion found itself on my field guide.....whew!! 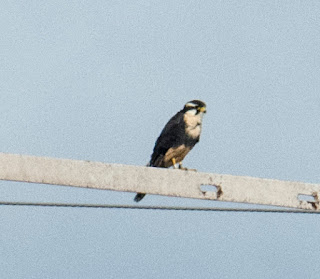 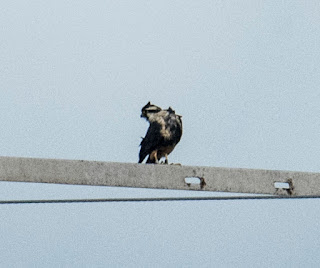 We arrived back at the dump at 11:15 and they let us in no problem, we drove up where anther birder was and we looked over some ravens, some garbage 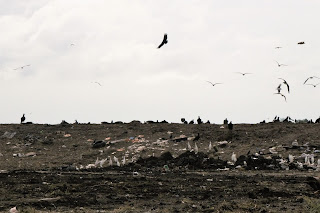 some other birders came, 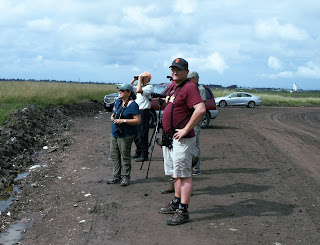 and then it popped up on a fence. 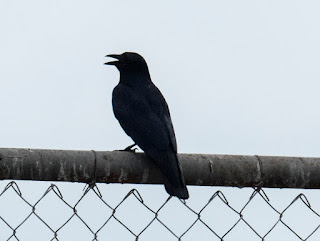 A older woman birder ran up to us as we were looking at the bird.  "Which one is the crow?"  She asked and then before anyone could answer.  "Oh, the one that looks like a crow."

Yea, it is smaller, a little more of a bluish sheen to it, when it isn't bathed in such harsh lighting that it is in my photograph, but it really isn't a garbage bird.  They haven't really been seen in almost a decade when probably west-Nile virus killed off the ones frequenting the dump back them or the habitat destruction south of the border has move their range south. (I've always tongue and cheek said that the dump employees got sick of birders and went on a little crow hunt one Sunday when the dump was closed.  No one knows for sure.

In fact, this crow was unknown north of the border before the 1960s and many think it is so similar to the Pacific slope crow in Mexico, the Sinaloa crow, the two may be the same species.  I leave that to others to decide.  On 11/13/2017, if was a reason for another lifer beer and a story.

Afterwards, Tyko and I tracked down battlefields

The last battlefield of the Civil War, The Battle of Palmetto Hill, where 5 weeks after Lee surrendered a fame seeking incompetent colonel (or one trying to steal cotton) tried to force his way to capture Brownsville and got defeated soundly.  There are more rumors about this battle than almost all of them, including French aid to help the Confederates.  Yes, the Confederacy won the last battle of the Civil War..and that is about all that can be proven now. 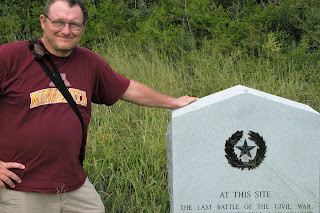 Would you fight over this? 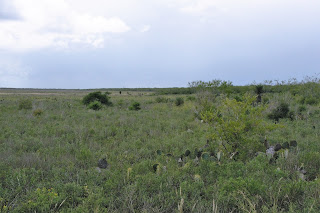 There was a photogenic white-tailed hawk down there.... 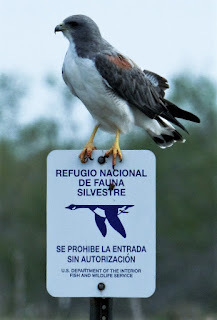 Then we also went to visit the Battle of Palo Alto, which is the first battle of the Mexican-American War, fought basically on the same days, but in 1846 (19 years earlier) than the Palmito Hills battle.  That war, now like my crow and the Civil War Batlle is thrown in the trash heap of history but basically allowed us to steal six states from Mexico, including the LRGV, which wasn't part of Texas or the Alamo traditionally..... 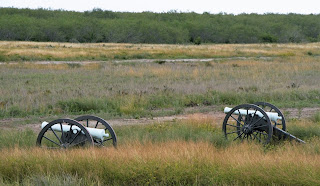 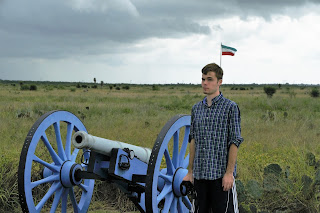 The odd thing about the leaders of the Battle of Palo Alto is that General Arista and Zachary Taylor would both become Presidents of their respective countries within three years and both would die the same way, from Pneumonia not long after that.  Taylor would be our second shortest Presidency leading to his VP Milliard Fillmore becoming our 13th President.  Not sure what if anything save answers for jeopardy can be said about that but neither them nor this battle is remembered by much of anybody else these days.  Like the crow, trash heap matterial

Now, I've had a lot of potentially things happen to me while birding, some in South Texas, so I decided to keep those teaching points to myself.  I gave my son the basics.

1) shower after a day in the field in the LRGV, to avoid chiggers
2) put on bug spray for mosquitoes
3) watch out for snakes
4) Don't speed in Starr County

then we added number five.....beware of scorpions on the field guide, then six, beware of traffic, then seven, don't tell the Border Patrol, why you came to south Texas, if the answer is "I came to go to the dump to see a bird." 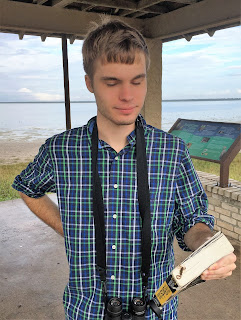 Crisis was averted in time, by the way.

What could possibly top going to a dump to see a crow?
How about going to a H-E-B parking lost to see parakeets? 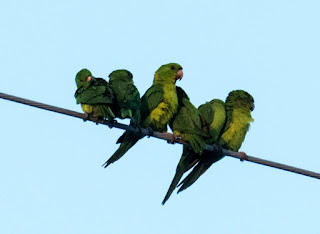 Ah, my son is getting the joys of birding.  Next maybe a sewage treatment pond, Donna anyone?

Well this is the life of bird chasing, go when you can where you need to,
the Tamaulipas crow, one bird closer to that coveted but of no real significance 300/800 club