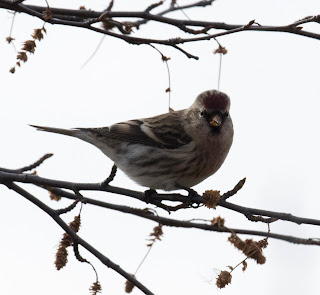 It was a long 24 hours.  You know, as I have repeatedly said, I get stopped all the time from the police and other authorities, occasionally I even know why they stop me.  I might be the only guy driving to have blown four zero breath analyzer tests, once when the first came up 0, a second trooper was notified and he brought a second device thinking first one was defective.  Driving slowly at 2am with my head out of the window listening for owls must not be a common traffic encounter for the poor troopers.  Maybe I should NOT have told them what I was doing?  If I had been stopped today, I'm not sure I'd would even answer the usual question I get, "so what are you doing in my county?"  I'm not sure any one would believe me--they'd just send me to the hospital on a 24hr hold..
"You did what?"

The day started good enough, I got South Dakota year bird, #260 (no where near a record) a common redpoll.  My first redpolls since 2012....it was going to be an expensive winter.  The flock of 250 that came that year cost me over $500 in bird seed

I also have pine siskins for the first winter ever 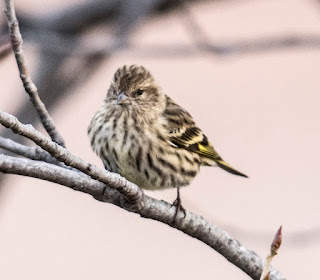 I cannot live by bird feeder birds alone.  A corn crake was reported on Tuesday on Long Island and yesterday, it was reported still on location.  Being not an easy chase, I wanted to make sure it had stayed overnight to go.

Yesterday, at 9am as I was booking my afternoon flight to JFK, New York, to go get it, a Facebook report came through.  A mystery hummer was reported at a friend of a friend's feeder in Berkeley--the opposite coast.  I looked at it, female Xanthu's but it looked different, somehow.  I'm not an expert on those birds.  A Baja bird only reported once before.  Later an argument of whether it was a female mountain gem, one of two species that are indistinguishable in the field rose up.  A Xanthu's is a great bird but a "Mountain Gem??"  That would be a "wow!" bird.  Always chase the better bird, I say.

I texted a California friend for details and chasability and went to winterize my cabin to give me something to do.

You go driving up here and you see things. I drove past this Merlin and made the birder U-turn to go back for the picture 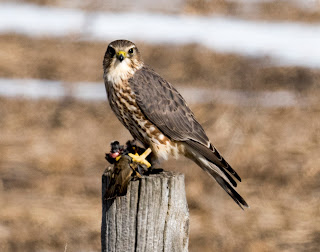 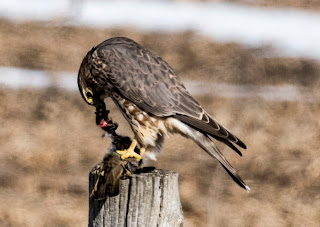 It was so close, it looked big and well, I initially was thinking Prairie Falcon before I had sense knocked into me.  Typically we get Taiga subspecies here or I see these birds in the Caribbean and they are much darker.

The cabin looked good and Silja was first person to be out on the ice on Enemy Swim lake this year. 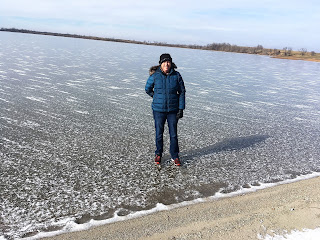 Winter isn't coming, it is here.  Deciding to get ready for ice fishing, I loaded up the truck with equipment to get ready for some fishing action before the end of the month.  Nothing beats fresh ice.  Back in the day, I'd fish on ice like this cruising around on an inner tube tied to a tree on shore.

It was about 1230  when the definitive word came out on the hummer.  Birders smelled a rat and those masters of observation recognized the feeder and triangulated a broken perch on it to one in Panama.  Intentions unknown, bird was at least not an ABA area bird, so no need to go to san Francisco.  I got home at 1;30, and because of last flight out of Minneapolis to NYC, leaves at 630 PM, with the 200 mile drive,  I had missed out.  I booked first flight out today.  I got a ticket to Islip which meant, I could leave 45 minutes later, 0630, and I could avoid New York
City.

It was an early morning, I left at 0120 and arrived at the airport driving in snow, arriving at 5am.  There was no line at security and by 0530, I was eating breakfast at the small terminal in MSP.  I had time so I checked Facebook.  i ALMOST DIDN'T.  What new could have happened?  Hey, cool a friend Justin Bosler, we share birthdays, he was going today so I texted him, maybe we could share a car, even a hotel room.  He texted back, he was at Houston, flying to Newark...no luck.  I saw the clock, 0545.  damn, my flight left at 0605, I had to run but I had read the ticket wrong...it boarded at 0605.  I sat back down on the floor leaning against a wall.

My sound was turned off.  Then I noticed a second message from Justin......"Bird Dead!"
"Really?"  I texted back, "call me."
Was he joking?  I thought.
"Aborting mission."  We connected after he had deboarded his plane.  It WAS found dead.  Dang.  If I had flown Delta or if it wasn't for the dang hummer report, I'd have been out there this morning much more disappointed than I was.
I un-checked in, felt happy Southwest doesn't charge change fees, left the terminal, paid my $6 parking bill, and drove home.

I was tired but well, had saved most of the trip.