Of Swans and Volvos 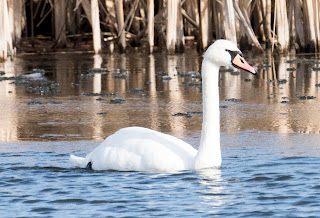 When I wrote my first novel in 2005, Marks of the Forbidden, my main character at the start of the series was Daniel Nielstrom, a young banker at a fictional bank in Watertown, SD.  He was the oldest son from a very odd Nebraskan-Swedish immigrant family.  They were proponents of everything Swedish, from herring to coffee to even the family Sunday sauna.  His mother spoke Swedish when she was happy and English when she was mad or sad and of course, they drove Volvos.
Although, I grew up in a Swedish immigrant community in northwestern Wisconsin, some of that had worn off in my four decades until I wrote that novel.  My wife bought me a Sweden travel guide as a Christmas present and soon, we were renting a motorhome camping around Sweden.  When I needed a new car in 2006, of course I had an urge to buy my first Volvo.
The dealer in Minneapolis told us of an interesting program—Volvo Overseas Delivery.  It was almost too good to believe.  We could get the car I wanted, 2 free plane tickets to Sweden and a night in a hotel.  We’d also get to drive our car around for a couple of weeks in Europe, have free shipping of it back to the US, and…AND about 10% off of the price of the car.  Why would I not sign up?
That spring of 2006 brought us to the Volvo plant in Gothenburg where I picked up my first Volvo, a cute blue S60.  We went on a wonderful vacation to Denmark and southern Sweden, finding places that in the years to come we would explore further.  In the decade that followed, I would become eastern South Dakota’s biggest Volvo advocate buying many cars.  The dealer in St. Paul even sent us over as ambassadors once and we ate dinner with the man in charge of North American sales.  It was just a magical trip after magical trip. 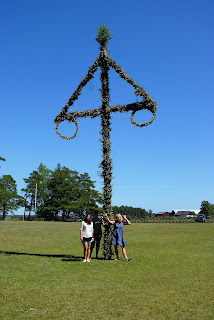 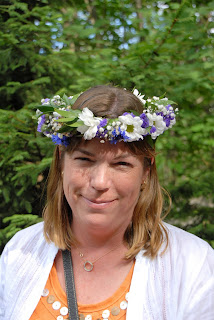 There is no  better party than Midsommar in Sweden. 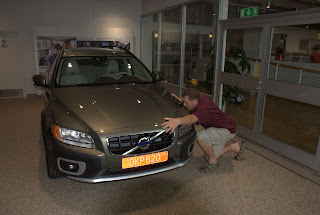 Olaf greeting a new Volvo at the plant in Gothenburg, Sweden in the past

here are various cars we've picked up in Sweden 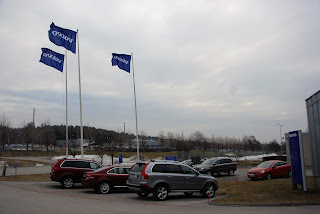 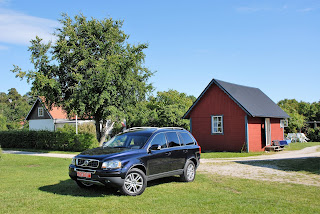 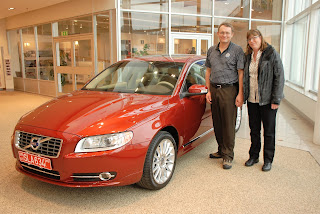 Gosh....once we even left South Dakota that looked like this... 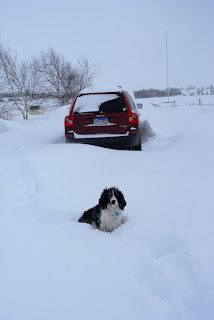 to fly to Hemavan, Sweden above the Arctic circle to go to a place that looked like this..... 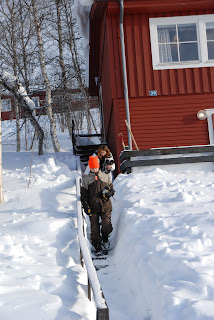 But the ski resort had a fun lodge with a nice fireplace and lots of beer...and I really liked that car we picked up along the way

My current Volvo is starting to take a beating, just turning 100,000 miles in its short 3 year life.  I love this car and it has only been in 19 states, 4 Canadian provinces,  so one might assume it has more life in it but alas all mechanical things reach the end of their time with Olaf and soon, my little red “mountain goat” as I’ve named it, needs to  be replaced.
Despite all of the Scandinavian heritage we have around the upper Midwest, Volvo dealerships are few and far between.  There are no dealers north of a line from Minneapolis to Denver to Seattle.  A few weeks ago, I noticed something that made me scream with happiness.  They are opening a new dealership in Sioux Falls!  One would never think such a thing would make my month but it did, so I went car shopping.  Graham Volvo on 41st street in Sioux Falls would be my next adventure and we met Jamie Robson, one of the new Volvo sales reps.
A professor I know at South Dakota State, KC Jensen, reported a mute swan, a very rare bird around these parts, this past week.  It was in the Oakwood Lakes area north of Brookings and on the way so I made a 25 mile detour to see a bird I had never seen in the state of South Dakota.  This would be the second appearance of this bird in South Dakota with the previous bird that came last winter to hang out in the Missouri River near Pierre. 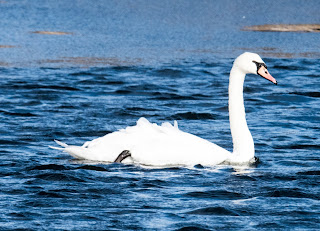 Yet another SD State lifer mute swan,  #284, first of five on the week

For birders, a mute swan is a bit of a problem.  You see, these birds are considered established exotics just like pheasants, starlings, house sparrows, chukars, and most parakeets down south.  This swan is a native of Europe and Asia, first released in parks on the east coast over 100 years ago.  They didn’t just stay at the parks for long, soon escaping, finding other habitat largely abandoned by the declining population of trumpeter swans, and bred more swans.
The American Birding Association has criteria in place before they add non-native birds to the official checklist and then can be “counted.”  This involves establishing a population over many, many years, and that it is self-sustaining, and are not kept in zoos and the like.  This swan has been on the national list for a long time but only this year for South Dakota due to that bird in Pierre.  It can be difficult to determine if a bird is an escapee or a lost bird.  Waterfowl are notoriously tough as many people like to raise exotic ducks in their farm ponds and parks.  Of course any bird at the Bramble Park Zoo or other exotic duck pond doesn’t count, but if a bird escapes and shows up somewhere, how do you actually know?   People like to report rare waterfowl from an exotic duck pond in Florida all the time and to be honest, it just drives me crazy.  I did NOT count a Grayleg goose (another frequent park bird) I saw last year in Rhode Island as I doubt it’s origin.  Largely, the choice is up to us, unless said bird is a state first and the state votes against it, then although it is still up to us, although in such a situation, it would be hard to count it.
Mute swans are not rare in this expanded region and are seen quite frequently in Minnesota, especially along the Mississippi river and two were seen as far west as Litchfield and Willmar area this November so one appearing near Brookings doesn’t seem such a stretch.  There is a need to check for banding and any clipping of toes or wings that might be done for captive birds but this can be difficult to see on swimming or flying birds.  On my bird, I saw one leg was unbanded so it looked like a wild bird but the bird never extended the other leg for me to see.  This was also a very skittish bird and acted wild. Having a duck, goose, or swan swim up to you and beg for a handout is never a good sign to call something wild. In the end, I counted it and it was my 284th South Dakota bird.  Last year, I would have not counted it for my big year.  My lower-48 year mute swan in 2016 was a Michigan bird swimming to a nest on Lake Huron.  It left no doubt on provenance.
Not everyone likes mute swans as it is currently locked in a love/hate debate.  The U.S. Fish and Wildlife Service has stated that this swan is harming aquatic vegetation due to overpopulation and eating the vegetation.  There is a plan to significantly cull the population in New York, which was vetoed by their governor.  Ongoing euthanizing of swans is happening in Michigan by their DNR.  The “Save The Mute Swans” is an organization with unknown motive that is out publishing information claiming that this swan is not invasive and that the bird came here naturally from Russia, ignoring evidence to the contrary.  They are threatening legal action in court but to be honest, that seems like a tough sell to me.
I understand their concern as this is a very pretty bird …but, they don’t belong here.  Our native trumpeter swans are now coming back after being almost extinct and we also have a large population of tundra swans that migrate through.  One of my friends from Aberdeen emailed me that he had a swan tag and wondered if this swan was in a huntable area.  I thought about it for a moment and then…sent him a reply, I think it is.  Mute swans, pheasants, chukars, and even gray partridge, are not native and bad things happen by letting non-native animal populations expand, so I have no guilt, even being a birder.  This swan’s days may be numbered.
Now you may be wondering how a swan and a new Volvo are related.  Let me bring it full circle.  Volvo is working at making driverless cars.  This new car, it was reported in June, can avoid all of the deer, elk, and moose that it encounters but there are two animals that it is having trouble distinguishing—kangaroos and …..swans.  During tests, those two animals have provided 100% of the animal/ car collisions. I don’t think there are many roos hopping around this continent but it makes one wonder about swans.  I was thinking that if we adopt driverless cars, we can solve the invasive swan problem at the same time.  Maybe this will be something else the “Save the Mute Swan” organization will need to campaign against.  Volvo’s  driverless cars might take care of a mute swan problem…who would have guessed?
All I know is that I’m NOT buying a driverless car …but I am buying a Volvo.  I’m sure there will be more on this in a later adventure.

In fact my world lifer mute swan also came while we were picking up a Volvo...but that was just a coincidence....and I guess another story.... 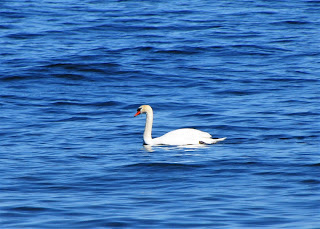 Kiss and hug your Volvo...