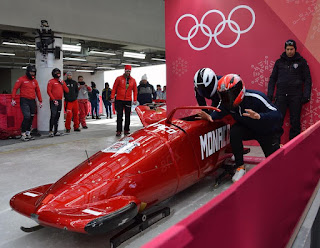 There has been much writing about the failures of the USA Olympic team, a team that is in many events, far too many, over hyped, and then the athletes under deliver.  There is also a TV Commercial featuring skater Ashley Wagner, who didn't event qualify for the Olympics.  Like she deserves anything after falling too much at USA Nationals and getting 4th place,  sparking a reminder of a cheer from the crazy movie Semi-Pro "Fourth place! Fourth Place!"  She is in the only commercial featuring a figure skater right now and seems to always be getting screen time on TV because she is there in Korea, and has even had at least one interview...I will say it here, who cares, who is she, really and why does she matter?

Many of the medals we have won in this Olympics are from events that were not even in many of the previous Olympics including many snowboarding and free skiing eventsevents.  Even in some of these, the international people like in Moguls have caught up and passed us.

This brings me to the Bobsled or Bobsleigh, depending on where you live.  Typically, this is an event I like watching but NBC seems to never want to show much, mostly because there are no poster children from the USA to promote so we can watch them lose.

The USA started 3 two-man teams in Bobsled, and we have 300 million plus people.  The tiny country of  Monaco, located on the shores of the Mediterranean has one team and a population of just over 30,000.  In what was a close and memorable competition (the Germans and the Canadians tied, Latvia 3rd) last night the best American sled got 16th Place, but the Monaco sled got 19th place crushing our other two sleds which because they were ranking below 20th, never were even allowed to take the final 4th run down the course.  We have some of the fastest track and field athletes in the world and if not for Usain Bolt from Jamaica, we'd have won a couple of the golds in the 100 and 200M in summer Olympics.  What has Monaco won?  Where is there past glory?

In 1924 Julien Medecin won an Olympic medal in Architecture for the Art competition of the '24 Paris Summer Olympics, and have yet to ever win a medal in anything else....Art?  The IOC doesn't even recognize these medals now.  By the way, he designed the Monte Carlo sports stadium, and the event was such a yawner that the judges refused to even award a Gold medal in 1924, because no one was worthy.  Medecin was so obscure a person, that reviewing the records, I can't even find when he died, or what even became of the 30 year old bronze medalist.

I was in Monaco in 2009, it doesn't strike me as a winter sports capital 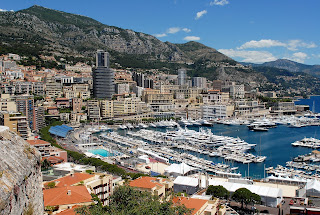 It strikes me as a money capital and a beach mecca.  Although when the Grimaldi ancestor captured the fort of Monaco in the 13th century, they earned the family nickname "malizia" which meant cunning, and apparently, they still are.

So with all of the Athletes we have in the USA, this is the best we can do?

Unlike the USA, Monaco, does have significant governmental support.  Prince Albert II, the leader of the Grimaldi family, who rules Monaco was the driver for Team Monaco's sled for four Olympics 1992 through 2002.  although he never broke the top 20.  He is still a big supporter of the sport he started.  The prince is the son of American actress Grace Kelley (who married Prince Ranier III) Grace's father and uncle were both Olympic medalists in rowing way back in the day.

So Maybe we'd be better off if a Trump or one of the Obamas participated in the sport?  Possibly.  much of the problem is that we don't encourage outdoor sports in this country anymore, being afraid of kidnappers, shooting, and especially liability.  I grew up in a town with a ski-jump in northern Wisconsin, many of the towns in northern Wisconsin had ski-jumps and jumping clubs.  Can you imagine the liability of something like that today?

Surprisingly, In Cameron, WI, they have reestablished their ski jump in 2016 after there club closed in the 1950s.  Ski-jumping is another sport in Which America de-cells, we have been decelerating for decades.  Here are the 2018 junior jumpers from that 7 meter hill, so maybe, there is hope, but there are no liability laws for these things in Scandinavia and eastern Europe, you accept the risks when you decide to go down the things, there isn't jackpot justice there.

I think we have a long way to go, and bobsleigh?  Now having toboggan hills in US cities is considered a risk.  Do any of you even know where the two bobsled tracks in the US even are?  Hint, think of places that hosted the winter Olympics and another hint, Squaw Valley (1960 games) got rid of their bobsled run a long, long time ago.


Well, in the 4-man bobsled, Monaco doesn't have a team, so for the USA, maybe, there is hope, but....knowing the way this Olympics has gone, they will not take the advantage.  For team Monaco, their Olympics are now history, their best performance ever....19th place.   They will celebrate while for team USA, we are still making excuses.

I've curled but my hammer is more like a newspaper, and I can freestyle x-country ski but sometimes at the bottom of hills I end up in a tree.  alpine skiing?  If there was an award for getting your ski highest in a tree after a wipeout, well, i may be in the running for a world record.  I a sense of personal safety, I given up putting on the downhill skis.  I may go skating today, depends if it warms up a bit.

If there was an Olympic event for bird feeding I might have a chance although, I'm not in the best location.. 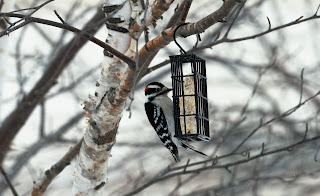 I'd be a better competitor in ice fishing. 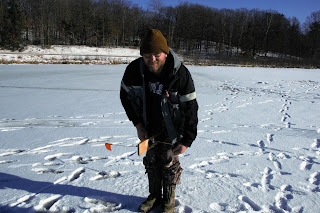 But that won't happen......I'm way too past my prime, maybe i can try to move to Monaco and wear the red-and white and compete for them?  I doubt that too....

I'm sending the Prince of Monaco a congratulatory letter, I'll report if I hear back from them