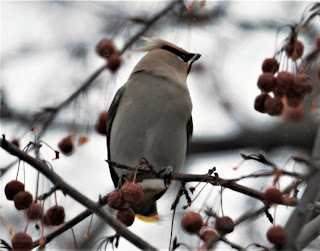 It is mid-February, I needed to get my column finished and write about something.  It is cold and nasty outside most of the time.  Football season is over.  The birding migration has yet to begin, and generally I’m sitting at home thinking of places to go.  I’m getting by binge watching curling in the Olympics. Typically, I use this time to update my “bucket list”—a list of things I want to do or see before, as the saying goes, I kick the bucket.

I first made such a list 35 years ago when I was just a kid and I’ve been forced to add to it time and again as it I have ticked off items.  Some, you’d think would be hard to accomplish, but items, 1-100 were checked off by me as “been there done that” at the end of 2016, ending my list. 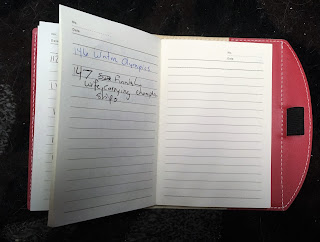 I went to the 1976 Olympics in Montreal and even as a kid, I remember that as being fun, but I’ve always wanted to go the Winter Olympics, and it has seemed, something has always came up.  On the second day of mixed curling, a sport, I love, I decided item #146—I want to go to China in 2020 and ring a cow bell during the Alpine skiing with the Swiss fans.  I also want to go to the Holland House to celebrate the Dutch speedskaters.  I already have an orange outfit and own the Swiss cowbell.

Well, I quickly scribbled down #147.  I want to watch the Finnish Wife Carrying championship.  Not the one they have in Frederick, SD which is held in late June.  Yes, that would be fun, and they also compete for your wife’s weight in beer, but no the international one in  Sonkarjärvi, Finland.  In this race, they typically carry the woman upside down, and it includes running through a deep water feature in which the woman’s head goes under. I guess one better not hesitate in the middle of that.  It just sounds like a fun party to go to.  Besides Finland is the home of my nemesis bird, the black woodpecker and seeing one is item #115.

I like big crazy, off the wall celebrations, as #111 is go to Punxsutawney on Groundhog’s Day, something I’ve never done despite living in Pennsylvania for three years, but I always wanted to go.  Attending Minot, North Dakota’s, Nosrk Fest is also on my list, #139.

Some things on my list are easy, like going to South Carolina, #119, the only state I’ve never been to, and some, like #125, photograph a cougar, is just luck.  Biking the Mickelson Trail from end to end and finding a cool rock with a cool story numbers #134 and #137 is something that it just seems I need to schedule and finding a rock will just happen anywhere.  I like cool rocks and I know a cool one when I see one.  My sauna has many rocks in it with stories.

I’m working hard on this list.  Number #101, to be a member of the 300/800/850 birding lifelist club, is just hard work.  Seeing 300 lifer species in South Dakota, I’m at 290.  The 800 is for the old ABA, and I’m at 796 with a likely provisional to get me to 797.  The 850 is that including Hawaii.  I’m at 847 with the same bird to get me to 848.  I need to dig out some very getable South Dakota birds, and that is not difficult and I need to chase birds around the USA.  One of which locally I need is a barred owl which I think I know where one lives but I never get a good enough view of the bird to identify it for sure.  I was out there today, hoping and flushed the bird again without getting a perfect view, well, much of any view.  I knew it was an owl.  Later, I drove around Deuel County and I did see some interesting birds. With nothing better to do, some of my birding buddies reported some cool birds in Aberdeen, so on a whim, I headed off westward.

Up on the northside of Aberdeen, I ran into a flock of my favorite North American birds, waxwings,
feeding on dried fruit in trees across from a nursing home. 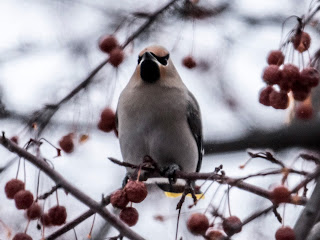 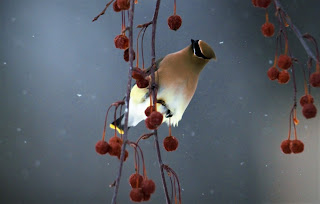 There are two species of waxwings, the colorful cedar waxwings that breed here and can be commonly found at any time of the year.  My favorite bird is the aptly named Bohemian waxwing., which can be difficult to locate.

I think I like that bird because I am a Bohemian.  No, I’m not from the Czech Republic or Slovakia, I have Celt and Swedish blood in me.  I mean the other definition of the term, “informal and unconventional social habits, such as an artist or a writer.”  That describes me.  This particular waxwing gets this Bohemian name for its propensity to wander.  That is also just like me.  I have a propensity to wander, like today.  I ended up in Aberdeen just to see a bird, I’ve seen many times before.  Bohemian waxwings are not consistently found, they nest up in northwestern Canada and then they disperse and can be found anywhere in winter.  The last ones I’ve seen were flying in front of my car in Warroad, Minnesota and I’ve seen them once before in South Dakota.

I ran into some birders I knew, photographed the waxwings and since it started to snow.  I birded and ran, and drove back to Milbank.  While I was driving back, I started to formulate new bucket list items.  I started the beginnings of a novel in my head and then thought about the weather.  Winters up here are rough, and maybe it would be good to spend February south?  I don’t know about doing that just yet, but I did add item number #148 to the list today, “get daughter to choose her college.”
Tomorrow, I drive to Minneapolis- St. Paul to tour Hamline University.  Won’t college tours ever end?  She is down to four colleges, but now she wants to revisit them, and refuses to tell us what she is thinking.  I think item #118, drive my Vespa scooter to Minneapolis, will be an easier project then getting her to pick her school.  Oh well, that is why it is a bucket list.

Keep dreaming, and start working on your own list making those dreams come true.