Studying the Historical records of Birds 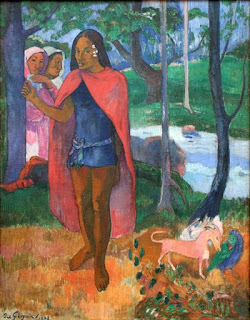 Art History meets birding, archaeology meets ornithology.  In 1902, Paul Gauguin painted Le Sorcier d' Hiva Oa, (Maquessan Man in a red cape).  I have always been a fan of Gauguin but I had never seen this painting that hangs in a museum in Belgium.  Gauguin painted this while he lived on Hiva Oa and then a year later he died and was buried on this minimally consequential island in the Marquesas.  This painting's importance transcends art, it transcends a lot and what we know about species and what "scientists" have reported or what is found in books.
Sometimes something odd is the important thing on a work of art.  Others see the color, the depiction of native life, the bigger meaning, and a select few only see birds.  Located in the lower left of the painting (viewer's right) is a depiction of a dog killing a bird, and not just any bird, a bird scientists had only a fossil record of and thought extinct as much as 600 years before white man had even visited this lonely South Pacific Island.  It is a  bird Gauguin would never have even read about because the fossils hadn't been found in 1902.
Yet somehow Gauguin saw one, and even more amazingly, he painted it, he painted a bird not "discovered" until well after his death in 1903 but still described by islanders.  How could that be?
Porphyrio paepae the Marquesas swamphen, is a thought extinct flightless bird similar to the many rails that populate isolated islands all over the world from the Galapagos to Mauritius to the Atlantic, it seems a flightless rail pair found themselves on just about any isolated piece of land and started a new population which evolved into a new species.  How and why did this happen on Hiva Oa?  The story is incomplete and will probably always remain so.
I saw a Gough moorhen in the South Atlantic and scientists don't agree how this bird may have repopulated Tristan da Cunha after the bird was extirpated on that island a hundred years ago and suddenly reemerged fifty years later.  The answer there is that it must have been reintroduced by islanders of course because how else could it?  Eventhough the local population on Tristan disagrees.
Gauguin painting a picture of a bird no white man had seen on the island he died and was buried on is one thing but is there more?  Are there any other reports?
By chance, I am reading a copy of Fatu-Hiva, back to nature we bought at a Monastery that was liquidating.  This is the somewhat incredible and amazing tale of Thor Heyerdahl's first epic adventure to an island to do an experiment in becoming Adam and Eve.  How he convinced a 17 year old woman to do this before he had even dated her, is also amazing, but I digress.  Thor Heyerdahl is my inspiration and the best explorer of the 20th Century IMHO.  Later, he would sail Kon-tiki in an even crazier tale, but one in which he got his inspiration by what else he saw on Hiva Oa, statues and stone carving of things that don't occur in the South Pacific, including large cats and huge crocodile resembling lizards.  He pondered where the artists had seen their subjects and unlike everyone else in academia, he turned towards the east and South America.
On page 161 of this old book he writes...

Suddenly Terai halted his stallion and pointed to the trail in front of him.  We had reached a hillock with low ferns, and a bird without wings was standing in the middle of the path, watching us.  Then it ran faster than a little hen along the trail and disappeared like lightning into sort of a tunnel in the ferns.  We had heard of the wingless bird, a strange species quite unknown to ornithologists.  The islanders had often seen it but never managed to capture one, as it always disappeared into holes and tunnels at great speed.....we searched a labyrinth of galleries crisscrossing the fern-clad hillocks, but we failed to see this mysterious bird again.

Wow, that sounds like a flightless rail to me.  This was in 1937, 32 years after Gauguin's painting and generally like his actually proven theories (he recreated the sea voyage on Kontiki among other things) on the origin of the Polynesian people that came from the east and not the west, this report has been largely ignored or dismissed.  How could it not be true?  What other bird could it be?  Why would Heyerdahl make this up?  Not one for hyperbole, he found statues and even Gauguin's old gun, in which Gauguin had carved the stock.  So why not see this bird?
Rails are strange birds and serial colonizers, one, the Aldabra rail evolved twice on the same island after it colonized it, got extirpated from a flood and then recolonized it thousands of years later and re-evolved through a process called iterative evolution into basically the same flightless bird.
There has also been much debate about the Tahiti Rail, 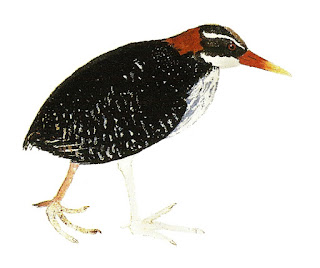 This bird was documented from Cook's expedition and then went extinct at some point probably around the same time as the Marquesas swamphen, but then there is the local islander version who reported it on a nearby uninhabited island until just two generations ago, maybe later, many describing the bird exactly, but other "researchers and scientists" don't buy the islander's tale and think for whatever reason, the bird died out a long time ago.  Some of the problem is that much of the work on this bird was done by an amateur ornithologist, and not an accepted elite.  If you haven't figured it out yet, if no one knows who you are, your theories are suspect.  That is the way this club works.  Thor Heyerdahl dealt with this his whole life in archaeology as he was a trained biologist, NOT an archaeologist and it caused him much angst. But even the skeptics say that unlike "hearsay records" like the rail on Hiva Oa, there is enough documented evidence to say that the bird actually existed.  I guess Heyerdahl and Gauguin saw phantoms and ghosts.
If a bird lived but no one took a picture or no official scientist captured a specimen did it even exist at all?  Listers of birds, like me, fight this all the time.  What is evidence?  Even with a picture....it needs to be a better picture, or is the picture even taken where they say it is?  It never ends, armchair skeptics and internet trolls are everywhere.  I can only imagine the naysayers at meetings accusing Heyerdahl of never actually making the Kontiki voyage
Many of these birds are extinct now, or haven't been seen for so long, they are considered extinct, but the rail on Guam has had it's numbers increase.  That bird almost went extinct due to the brown tree snake, many others were eaten or destroyed by rat invasions.
In the big scheme of things, if a bird went extinct in 1412, 1902, or 1937...does it really matter?  Dead is dead, right?  I think it matters.  We need some hope, since exotic birds are going extinct, that is a fact.  There have been stories of people seeing extinct Hawaiian birds over the decades.  These have not been proven.  Sometimes they are spoken of like one would refer to a mentally challenged relative, dismissively and condescendingly.  I guess it would be nice to know if the Ivory-billed woodpecker still exists somewhere in secret, maybe in Arkansas, the Big Thicket in Texas, or maybe Cuba.  I know of a few people who have spent time looking, and well, imagining a sound or a flash of a suspected bird.  Many birders and especially lay people think these people need to up their lithium doses, but I think a few of these birds (rails or woodpeckers) are still out there, somewhere.  Which is more likely...bigfoot or the ivory-billed woodpecker?
The Imperial woodpecker may still exist in the Sierra Madre but some searchers have never came back from looking probably killed by drug lords, and so any wide spread searching seems like suicide to me, but who knows, it is good to have hope.
So, if Thor Heyerdahl had a bird list, he had a bird on it no one else in the 20th century had, and a bird none of the rest of us will ever see, but there are still cool birds out there as I try to get 8000 world life birds.
I'm not heading to the South Pacific this year, but suspect that in 20 months, I will be following in the footsteps of Paul Gauguin on my way to New Zealand, assuming COVID-19 doesn't get me.  I got easier birds to get in the meantime.  Although 2020 is a rather tame year, on Saturday I leave for a trek to fill in some holes from my Mexican bird list, then I'm lying low until fall for trips to Brazil and Bhutan where I should get me some cool stories and interesting lifer birds.
It does amaze me that even reading about another interest I have (megalithic archaeology) occasionally I get distracted into the land of birds.
Art history and ornithology have come together to solve a mystery...or maybe cause one....who knew?