Two out of three ain't bad 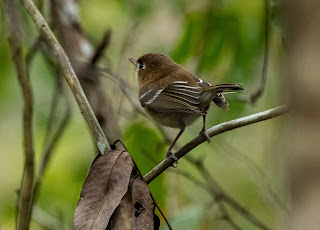 Island endemic birds are always a listing problem.  Islands from the South Pacific to the South Atlantic to even the Channel Islands of California have species found nowhere else.  This means vacations to the Caribbean have to include spots like Barbuda to get a warbler, and San Andres Island (Where?) to get the San Andres Vireo...and if they haven't yet, they should.
This brings me to Cozumel, and island I'm not so happy with in general, as the whole seven cruise ships landing at the same time scene is not my scene among others.
I was here last year, I saw some birds, but missed all the endemics....today....I had plans
1) Get some sun
2) Avoid Montezuma's revenge
3) not let the duty-free store and the shops get to me
and
4) Get two birds

Why just two birds?
Cozumel has THREE Endemic birds
the three Cozumel named species
the Cozumel vireo, the Cozumel emerald, AND the Cozumel thrasher, one if I find it, I'll be a hero, or nobody will believe me, and this leads us to why one should go see these birds ASAP.

Unfortunately, there is another problem with island endemics, their propensity to go extinct.  Living in a small place with limited resources can lead to problems should habitats change or a new predator shows up like rats, snakes, and cats, the Cozumel thrasher fits in here, more on that later

After a few hours on a private beach today, Silja and I walked over to the Planetarium to try to dig out at least the vireo.  Like I said, my 2019 visit to this place failed.  We came back to the center of the economy on the island and ran the gauntlet of people selling cigars, renting scooters, selling leather, and everything and started to look for the vireo.  It took a while and even after I found a trail in the hammock, well, sort of a trail, we saw some warblers but then, the vireo showed up and almost let me take a good photo. 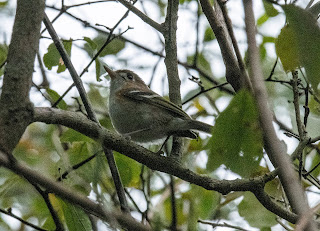 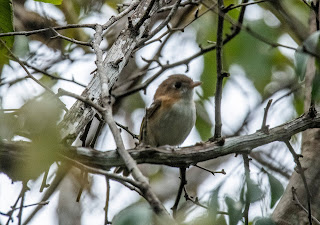 It was a cute little vireo, and a lifer bird.
So we  then went back out to the flowers in the parking lot.  I saw a hummer in a tree and then I lost track of it...I looked everywhere and then my wife spotted it.  It was the wrong hummer, a green breasted mango sitting on a nest.  It was a cute bird, though but one I'd seen many many times on Roatan 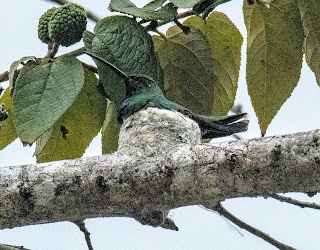 So we kept at it, until the futility of it all set in.  Silja sat on a curb, I looked five more minutes and then  started to put my camera safely back in my backpack.  I wasn't taking my expensive equipment in full view of all the people in this town, I might not make it back with it all.

A local woman was sweeping the sidewalk and then a young man came rushing at me and then pointed a few feet behind my wife.  I was suspicious, but then I looked in the small palm tree...
A female Cozumel emerald on a nest 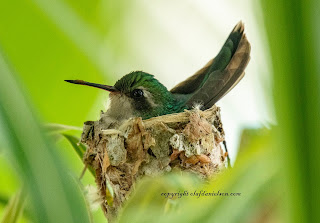 That was a lucky find and it left only the Cozumel thrasher, unfortunately, that is a bird that has not been seen since 2007, and now presumed extinct.  No one is totally sure, but the numbers dropped after hurricanes and invasive boa introductions have also been implicated.  This bird may still be out there somewhere, but I never saw anything that even looked like a thrasher.  Two out of three ain't bad to steal a Meatloaf saying.

Cozumel...?  Now I won't have to come back, so it is all good news, well except for the poor thrasher....