Birthday in the time of the Pestilence 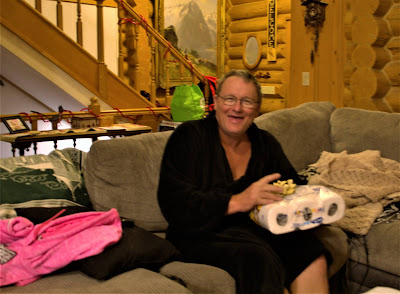 Birthdays, they are like wine.  One can nurture them and plan for the future but in the end, they can still taste like a cat-box.  Yesterday was my 54th birthday, my wife was planning a big party...in Florida, but alas...not to be.  I've had some miserable birthdays.  It is always tough to beat my 22nd birthday, going out to dinner alone at a Thai restaurant in Scottsdale AZ after my national speech tournament debut ended in failure with my visual aides being lost on a plane.  To add to the misery, my hotel room being overbooked, I slept on a park bench, then I got lost and dehydrated in the desert going on a walk, ending up in the oryx exhibit in the Phoenix zoo, the security guards banned me for life from the zoo (do they keep records this long?), then on my last day, celebrating by myself, I got food poisoning and thought about dying on the plane flight back.
I did absolutely nothing on my 23rd birthday in Medical school, afraid to leave my apartment.

Then there was one spent at the Fargo airport after a day of flight cancellations going to Sweden, where my wife just started crying uncontrollably at the Red Lobster after having to punt for the day, we did leave on March 22nd, but I ordered a second bottle of wine and kept filling my wife's until she settled down.

This year, I spent my birthday ....how to even describe it fully?   I am taken back to lyrics by the Silver Stallion as sung by the Highwaymen, "I was running like the One-eyed jack of Diamonds with the Devil on my tail."  The phrase has no hidden meaning as far as I can tell, the Jack of Diamonds is not one-eyed in a typical playing cards either...I just don't know what it means, but the entire song is filled with oddities and a person being put at risk.  The phrase though gives a picture of a person moving fast to avoid something really bad.

Staying in Florida was putting us at risk, as COVID-19 was coming at us like a tsunami.  We watched and heard about many millennials partying all over Florida like one goes to the beach to see all the fish and wildlife as the sea moves out just before the big wave strikes them.  Older people were not taking this seriously as of last week.

By Thursday AM, our RV park north of Tampa had closed its pool, despite no scientific basis for doing so, they cited "liability concerns."  Would they be liable if I I caught the pestilence from the shaking hands with the man cleaning the bathroom or mowing the grass?  The club house closed, and with all the state parks closing, to even walk through, and talks about closing rest areas and just about anything (will we even be able to get diesel soon?), figuring it would be easier and safer to be in the current lee of this epidemic, and away from people, some of which might have malevolent intentions, we headed as fast as we could to South Dakota.  We would learn later that at the RV park next door (one with a pickle ball court and better birding) a cleaning woman had been been diagnosed with the virus and we had visited that park, but were careful, so hopefully, we missed contagion

The 1800 mile trip took three days, six hundred mile RV days are brutal.  We stayed out of all buildings, slept in the RV, ate in the RV, avoided everything.  Some of the KOAs were closed to new residents.  I-75 was filled with trucks and Canadians heading north, the Canadians worried that they would be stuck on the south side of the border without healthcare.  We took a western route avoiding Atlanta, cruising north to Montgomery AL. and then Memphis. 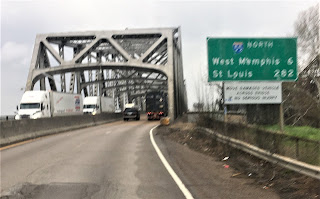 It was busy in Memphis and Omaha, but not Kansas City at all.  Driving through the Ozarks and the rural heartland, I'm not sure these people quite get yet at what is coming.  Although, it would be easier to isolate contacts here to a degree.  Our government didn't get this.  Congress was too preoccupied by a wasted impeachment fiasco and our executive branch, well, I'm not sure what was going on there at all, sometimes I think a third of our government went to lunch three years ago and hasn't returned, and the CDC....I guess history does repeat itself...I'm not sure either party could figure out now how to even get out of a paper bag...It doesn't matter, now we are there, and what it portends after this wave of death and illness passes, I actually do not know?  Will the world even be the same place? 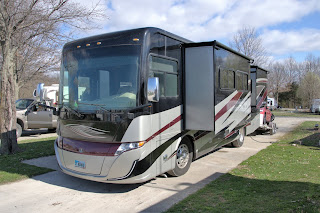 I woke up on my birthday in Clinton, Missouri, where my Tracker boat was manufactured.  Like all birthdays I saw the sunrise... 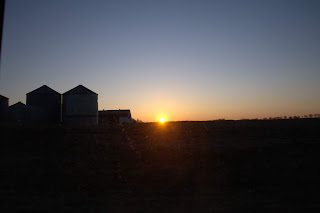 I thought that maybe, just maybe, this might be my last birthday sunrise.  I cried halfway to Kansas City.  I almost died when I was 15, and I know the 38 1/2 years since have been bonus time, but to be selfish, I kind of like living.  I have bucket list items to still do and see, I know going to South Carolina (my last state) doesn't matter, but I'd like to see my grandchildren, even see my kids in stable lives (even a marriage or a stable girlfriend) and have their futures going forward.  I'd like to hug my sons again (they will be isolating in Madison until this is over) and I'd even like seeing my parents, have a cocoa cake, my favorite, even see bird migration, play cards with my sister....but alas...it isn't up to me, I guess.  I'm not sure I'm worth a tear let alone earned the right to shed one, so I got into KC and drove.  I went by Kaufman Stadium and the home of the Royals

Will there even be baseball this year.  Will there ever be baseball again?  In Field of Dreams, they talk about the one constant thing being baseball in America, well, even in the war we had Ladies baseball but in 2020?  Maybe nothing.  Who'd have thunk it a US without baseball? 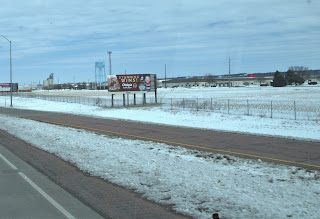 After cruising up Iowa, we crossed into South Dakota to see... snow.  It is a harsh reality of winter despite the calendar, that the cold and bleakness hasn't abated yet.   Back in 1966 when I was born, a large ice storm arrived on March 21 down here, killing thousands of sandhill cranes, a bird that has always boded ill-will for me, and at least, I didn't see any anywhere along my journey.  Robins and geese, ducks, and gulls were the only migrants spotted the entire 1800 miles.

I'll fight this as long as we can.  We'll hide out here on the prairie for as long as we can, avoiding everything.  We have food, protection, space, and opportunity, unlike far too many unlucky people in the cities.  My daughter is home from college and when I came home, she and my wife made me a birthday pizza and then we opened presents....it was nice to be remembered.  I had a friend call, my parents, and mys sister as well as my sons.  I enjoyed that and forgot about what I fear is coming.  I got two hi-tech beach towels and an India and Thailand field guide for trips, I probably will never now take....and I got what everyone deserves during this time, toilet paper.

We went out this morning and resupplied, even here in nowhere, lettuce is in short supply.  They had 8 heads of romaine, we only took half, leave for the next guy, I also took half of the meager onion supply.  I bought a truck load of bird seed and thought about buying chicks.  We are supplied until June but it may still get tough out here, I have twenty pounds of potatoes that may have to become seed potatoes if we have to dig up a portion of the ranch for a "Coronavirus Garden."  If we have to ration, we can live off fat reserves until August and then those potatoes might become 100 pounds of potatoes and feed us for a while.  We also bought pet supplies and seeds at the farm supply store, we'll forget about the chicks for awhile.  If needed, the "fence row chickens" the rabbits that have been steadily multiplying since my last cull, will taste good so I'll let them live for now.  I should have half a beef at the butcher next week but maybe someone else got it?   Got a freezer, and two refrigerators up and running.  It is what all of us country people do.  We've only ever been trapped here for 10 days, ice storm, in that case without power and once for 4.  My grandparents had to be able to survive and entire winter without getting out so I guess stocking up runs in my soul.

Here in South Dakota, we too, have no toilet paper, but ample Kleenex and paper towels.  Bread is thin, flour, absent, but sugar, got enough to feed the hummingbirds of the world, which seems odd since sugar comes from Florida and the wheat from nearby.

I even have 151 rum in stock that doubles as hand sanitizer,  ....hopefully I'll get to drink this swill to toast us surviving this.....but who knows?

In a month.....the farmers, God willing, will be getting out in the fields in an attempt to grow food for the world.  a few weeks later, 280 cattle will be on our ranch, fattening up for the slaughter in the fall, munching their way around green idyllic prairie hills, while rare butterflies fly around in the hot summer winds.  I yearn for summer.  I yearn for cows.  I yearn for butterflies, meadowlarks singing on fence posts, and snipe winnowing above me.....looking through the bleakness of April, I cannot even see a glimmer of this, yet.

What a difference a year makes.  Last year, my birthday was spent at sea, 1300 miles off of CapeTown, South Africa, I had just left Trisdan da Cuhna, where I had been drinking lifer beer at their pub, now that was a pretty good day! 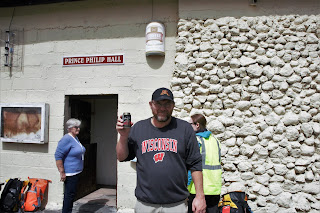 Life moves on and changes, the way of things

Stay safe, self isolation day 16 is soon gone and for the moment anyways, all is well
54 and enjoying every minute