POKING AROUND THE PIEDMONT 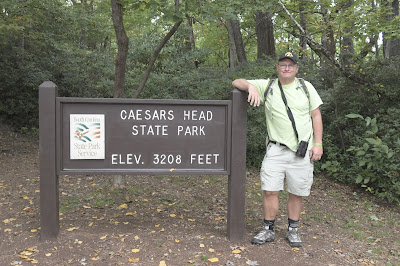 Well, the report from South Carolina and our RV trip continues.  We did the tourist things, we drove up to Asheville and saw the Biltmore, George Washington Vanderbilt's impressive mansion, brother of CNN Anderson Cooper's Great Grandfather.  This is the largest privately owned house in America.  It was over the top, in a kind of Mad king Ludwig of Bavaria sort of way, but with more planning.  Just imagining the costs of keeping that house is astounding.  What that generation of Vanderbilts were thinking between this, The Breakers in Newport, or the Marble House or the Petit Chateau in NYC, just makes me scratch my head.  It cost the equivalent of 200 million to build this one.  They funded this for a decade by selling 83,000 acres in the Thirties with the old legacy money largely spent to the US Government to start the National Forest here in the Smoky Mountains.  The builder, died in his 50s from an appendicitis and really never even enjoyed this.  Vanderbilt was scheduled to go on the "Titanic" but demurred and sailed on the "Olympic" sending a servant with his luggage in 1912, who drowned.  His nephew died on the "Lusitania" when it was torpedoed in 1915. 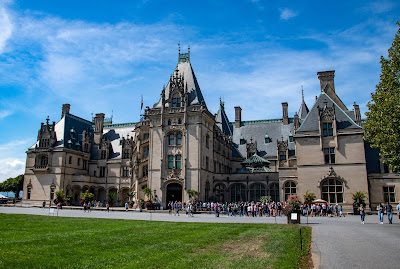 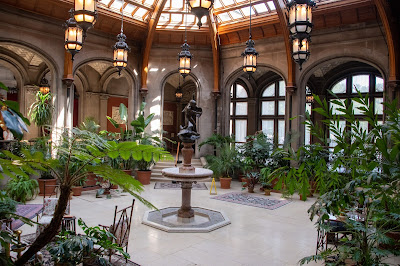 The indoor pool was cool 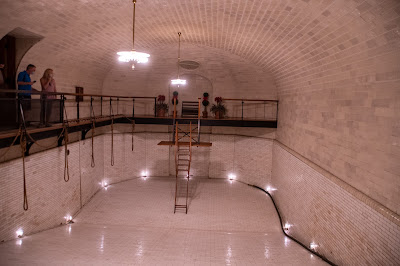 In my opinion, Olmstead, who laid out the gardens made a mistake in putting them where they can't be seen from the house.  In 2021, they had butterflies, so I guess that is okay.  The waiting line was long, and it was $160 to tour it, with proceeds going to the Vanderbilt heirs, but, I would recommend it
Clouded Skipper, a lifer 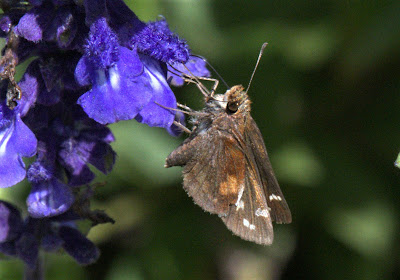 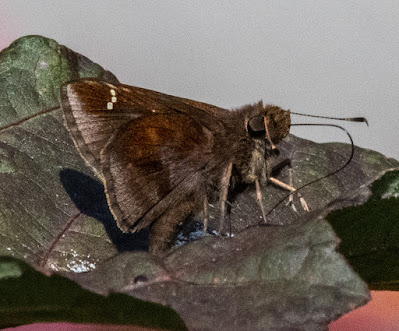 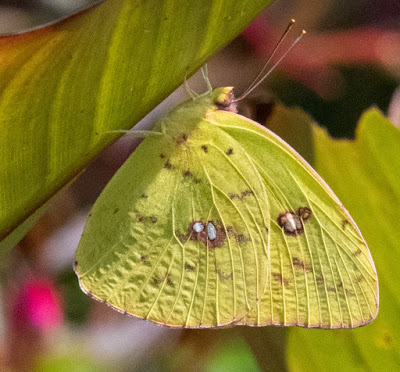 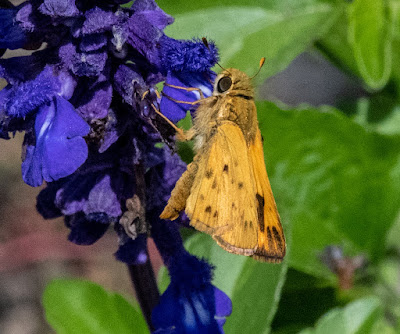 We drove a few miles to walk along the Cowpens National Battlefield, where much maligned British Colonel Tarleton's army was largely destroyed and set the stage for Cornwallis to chase Generals Morgan and Greene all the way to Yorktown, Virginia to his surrender the end of the Revolutionary War.  The movie "Patriot" was based largely around here, Mel Gibson played Francis Marion who led the local resistance, the local rebel leader, nicknamed the Swamp Fox was the bane of Tarleton.  They really took two battles and wove them together in a fictional movie, that seems real, we did win the battle.  Mel's big speech was sort of correct, except it was Morgan who gave it, well, sort of gave it. 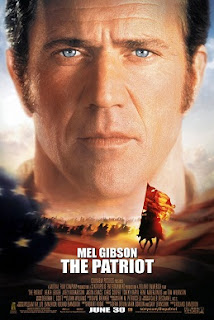 History is Hollywood, correct?  Morgan was a master tactician, and in here at the Cowpens, Tarleton wandered into a trap after overplaying the event.  I doubt he was as much of an asshole as the man who played him in the movie, but who knows? 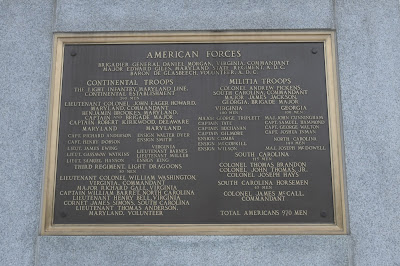 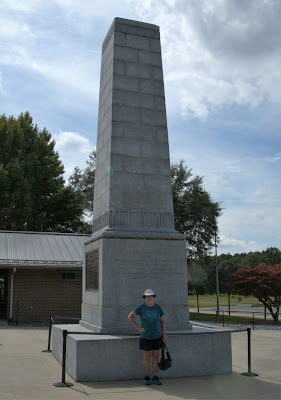 It is hard to believe more battles of the Revolutionary War were fought in South Carolina than any other state.  A trivia question for later.

We went up in the Mountains

We went to Devil's Kitchen at Caesars Head State Park, Legend and local lore, however, say that early Scottish-Irish immigrants who made their own alcohol allowed the Devil to make his own and one drop split the rocks.  Must have been some strong stuff. 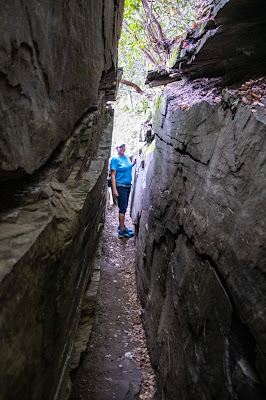 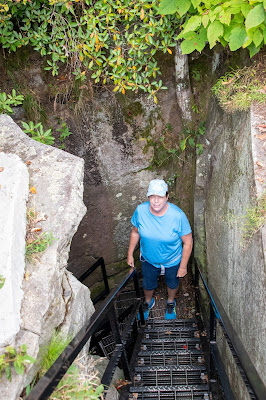 We walked over Poinsett Bridge, the oldest Bridge in the state made in 1820, and by the same guy that made the Washington Monument.  It is also hard thinking Model T's bounced up this road between Asheville and Greenville 100 years ago, and then this bridge was 100 years old. 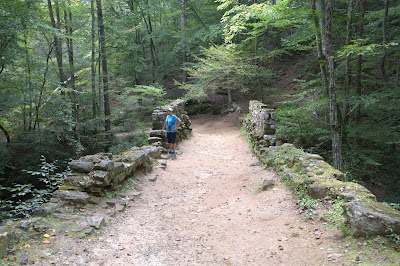 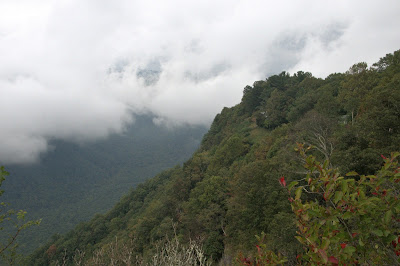 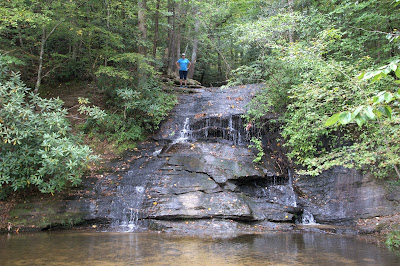 We went to Spartanburg, and saw the monuments to Daniel Morgan, Revolutionary War hero who if not for his exploits, we'd be British citizens.  Few know his great story. 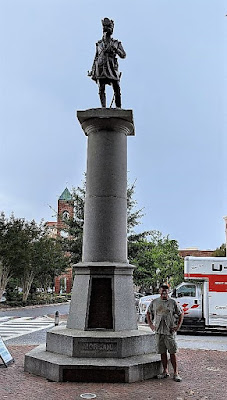 Fewer still know about Chaser, a border collie who knew 1000 words and the research dog at Wofford who amazed, considered the smartest dog of all time.  Then we ate Mexican food after looking at an Indie book store. 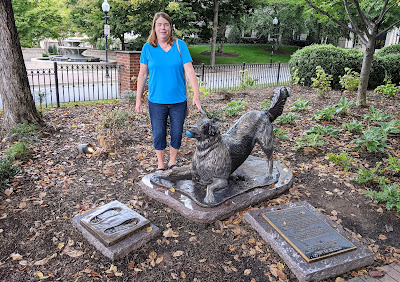 We skipped the huge Peachoid (water tower) in Gaffney, and more and more battlefields. We skipped the corn maze but not the ice cream, which as it turned out was filled with MSG, (sorry Silja). Tomorrow, we head off to North Carolina, on our way to Virginia, with cousins, ostriches, and red-cockaded woodpeckers are in our future, rain is expected, so we will see what we see and how it goes.

The only RV issue is a cracked sewage hose, but nothing the rain didn't clear up for us.