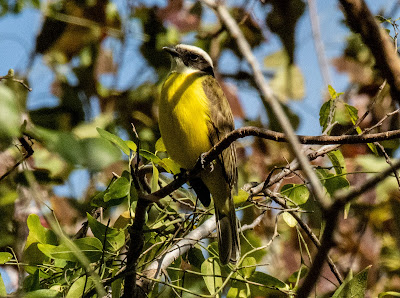 Well, I'm trying to clean up "birds on the board" for my North American life list, somewhat shockingly, I have left 6 birds simmer out there, which is kind of hard to really do.  I left these "ducks on the pond" as one could say because, 1) there was COVID, 2) thinking I had Covid (test negative), 3) I went birding to Puerto Rico, 4) nothing close 5) home for the holidays, 6) family trip 7) make sure I did not get COVID, 8) RV had to go to the shop for recall on a taillight 9) I promised to move someone's hot tub to the dump, 10) Do I want to fly with COVID protocols?  Finally the wife said, "go."  Then a few days later, "why aren't you going?"  I quoted reason 8, then a day later, "Why not now?" I quoted #9, finally yesterday morning I bought a ticket, moved a hot tub, jumped a plane to Texas and here I am in McAllen.

I started this morning at Santa Ana NWR, the place is essentially closed, the visitor center is tore up, no tram. they are not feeding birds, like no one cares, but again, why would the US Government or the local people care about birds and birders down here, how much tourism is birding to the Lower Rio Grande Valley?

I digress.  I was met by local snowbird birders Dave and Sandi at the hotel after  a short night after delayed flights and tight connections.  My shins hurt from the Houston Dash, The cold front met us at the stakeout for the bat falcon, the first one of these little falcons ever seen in North America.  The crowd was large.  a half a million in optic equipment sat waiting for a show.  As it turned out, there really wasn't much of a show 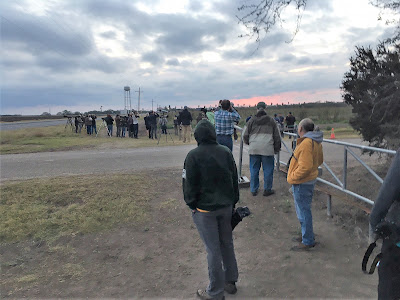 At half light the bird flew over, and with a 25mph gust of wind, it was quick, and then....it was gone.  I took a photo of those watching or missing it. The people immediately next to me never saw it.  It landed on the line 4 power lines down, some people ran a quarter mile and got too close and it was gone, 0730 and the chance was done.  IT LEFT THIS BIRDER WANTING! ....wanting to see it again.
So, we went for the back up bird, a social flycatcher at UT RGV in Brownsville.  It had been there for a while.  We arrived and then we saw what could have been it 80 yards away through grass, my photos were blurry as could not blow them up on the camera to see what it was, then an hour later, we had another quick view.  Then the birds went away, all birds, well not all of the birds, the local Muscovy ducks were there. 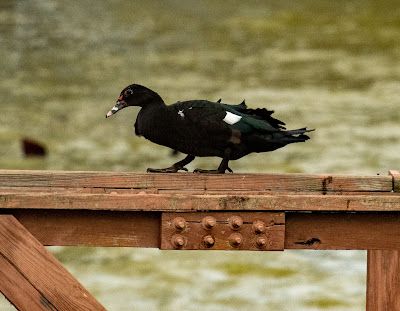 Then I practiced shooting photos through the grass at a couple of least grebes and a blue heron, it was not a good location but what do I do, get a machete? 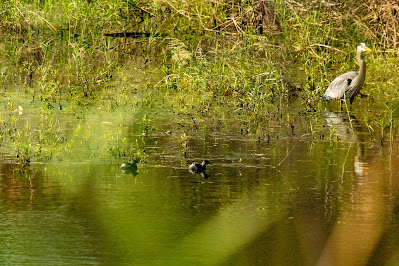 I looked for butterflies, and the sun came out, I found a tropical checkered skipper 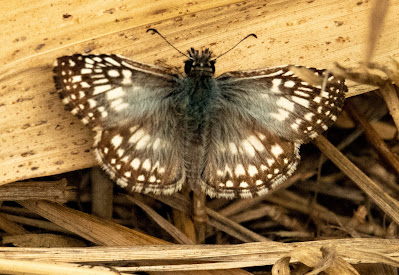 Then four hours at this stakeout, it was halftime and we went for lunch, food sore and hungry.
We came back 40 minutes later, filled with Stripes tacos.  Half time worked.  I spotted it a time time in the grass again a crappy photo and disappeared but then posted next to the trail and the viewing window was tight but photos were had by all, I think. 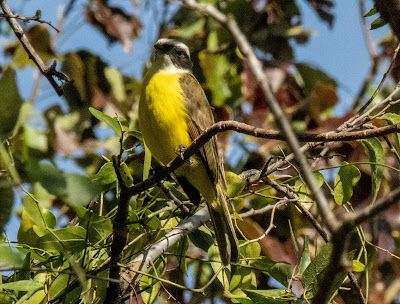 Finally!!!!
So we went back to the falcon stakeout and three hours of cold wind later, no bird.  I had missed flights out of town so I found a room, walked to the mall to get food since, no one delivered, had no place sadly to even get a lifer beer and so I came back to my room with Chinese food from a place with a Japanese name, served by a Hispanic, oh well, food is food on the birding trail.  I needed to plot my escape from the valley tomorrow after a third visit to the bat falcon stakeout.
A lifer bird a day, today, I guess 1 1/2 lifers, we'll say 812.5 lifers, I hope to get better looks and even a photo tomorrow to clean up that half.  I saw it but....., The morning will be cold, I bought a stocking hat, it is going to be nasty at 7AM
more tomorrow on day #2
Olaf