One Night in Bangkok.... 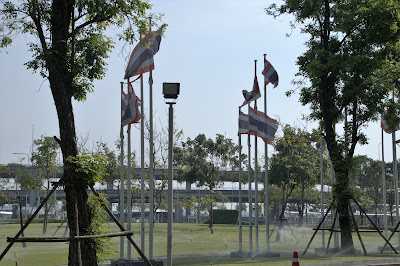 Two hours to Houston, 14 to Tokyo, just under 8 hours more to Bangkok, plus associated transit times, ground delays, the International Dateline, a cab ride and we were there.  We left at 4AM Sunday from our RV north of Tampa.  We arrived in our hotel room at 0115 on Tuesday.  But where was there?  A hotel called the Novatell.  In it all I made two mistakes.  First, after a string of surprisingly good movies, I got my sleep well, and was entertained so that was not it.  The first mistake, it turned out was I (well we), went west, we should have gone east. I was doing the math in My head.  Tampa to London, London to Bangkok.....I went 13 time zones west, that leaves 11 east.....crap

The other mistake, was worse, I ate the United Air egg thing for breakfast......the last United Air egg thing I ate on our way to St. Thomas in 2002, led to Salmonella, and 2 decades of funny stories, and me spending a night on a beach hoping for a tidal wave, or a lucky meteor strike...anything....this one.....

Well, Salmonella takes a while....I had that one night in Bangkok, then we were off to Pattaya area 60 miles south to get over the jet lag in a place that was sort of maybe is where 1985 Orient Beach St Martin FWI meets, well an Icelandic spa, not the tourist ones near Keflavik, no the ones tourists rarely find, with the lady shower monitor in the showers making sure everything that is supposed to be washed is, and where they skimped on dressing and locker rooms. (as why would you have two?) because then you plunge into great designed baths. Here at Dragonfly, it is a great place just carved out of a swamp......

But as you are trying to find the correct and even better description you realize that nothing is making sense as you now have a fever of 103, are sitting out in 95 degree weather, and suddenly The Revenge of United Airlines hits you like a rock......

Yea, there is Montezuma's Revenge, but there is something worse, much worse, I call it United's Revenge....sigh.

It was bad, I moaned, I threw everything we had with at it, the badger that was gnawing  its way out of me in three directions was not a full size one, but big enough to leave lasting scars.  I had dreams of being attacked by a hawk on some island well past New Zealand, who was somehow mad at me for saving a dog.  It was a Yorkshire terrier and I do not even like them.  Then there was some car ride, left and right right and left, and OMG, I woke up but I was still moving...I even dreamed I was having abdominal pain, but when I woke up, the real pain was worse!  I might have even converted to a different religion, but well, does that count during desperate times?  I also gave up beer.  Through it all, I survived.

They could not make Thai food bland enough for my destroyed taste buds.  I ate a smoothie the first day and the banana flavor tasted like a pine tree.  Day two involved a quest for something that tasted correct, I ate a sausage that tasted like a moth ball, and grain, can I get some grain?  They offered my some pork infused porridge.....today, I gave up and drank beer (more on that later).  I am happy to report, beer, tastes like beer.....it is not good beer, but it is beer, good ole beer.

I birded from the deck of a pool with naked people sauntering past me while I randomly  called out works like flowerpecker, Milky stork, ashy drongos, Germain swiftlets, and bee-eaters to people, who did not understand me and it was not always a language barrier.  I have called out worse bird names when I was more lucid, but they do not know that.  So calling a guy a flowerpecker...I'll skip that.

Today, We walked off the reservation and got a few photos


We have kind of been a menace birding here. Stirring up dogs. Stopping traffic, today, one guy either said, "Welcome to Thailand" or "Get the F#^k off my land" honestly, I was just 10 feet off the road and Don H and me argued about exactly which he said.  I think he was not so welcoming.  Don says he was being king and friendly...

We did end up on another guy's property, who invited us for cocktails, as long as we told hockey stories.  His name was Brad.  He assured me, that any pledge made while febrile about alcohol is non-binding, so he handed me a beer.  All is apparently right with the world on that front, but like I said, we may have new holidays to celebrate.

There is some snake with poison and venom.  Dengue fever, all kinds of crap and well, all that lying near death by the pool thing now means the Scarlet backed flowerpecker and me got something in common and let just say it is the color of red.

I say we are in Pattaya, we are only close to Pattaya, Pattaya is a weird place, I cannot handle Pattaya.  The innuendo in the movie "Hangover" is closer more to Pattaya than Bangkok.  Today we had to go into the city to replenish our reserves of anti-e coli, and Salmonella medications, God, Allah, or Buddha knows what is in store for us in Bhutan, and the other couple we are traveling with needed a tweezers.   We pack light and have simple needs.  What can I say?

An article in the British tabloid the Daily Mirror once described Pattaya as "the world's sex capital", a "modern-day Sodom and Gomorrah". This provoked anger from government officials as high up as Prime Minister, and the Pattaya police superintendent, who both denied that Pattaya is a sex trade paradise. Upset about the British media's stories, he insisted they were fabricated. "There is no such thing as prostitution in Pattaya," said Col Apichai. "Where did they get the figure of 27,000 sex workers in Pattaya? Anyone can make up this information....Thai ladies having sex with foreigners is their personal issue. If they like each other, I don't see anything wrong with what they do behind closed doors." In response, Pattaya social worker Surang Janyam, the director of Service Workers IN Group Foundation, said that estimated number of Pattaya prostitutes published in the Daily Mirror is inaccurate: "27,000 sex workers in Pattaya is way too low. We have a lot more sex workers than that." In June 2019, over twenty high ranking Police, Army and Local government officers toured Pattaya and reported the central streets safe and free from illegal activities.

Pattaya is a Minneapolis sized city on a big flat beach, (which has been closed due to raw sewage being leaked on it a few times, oh and then there was the Monkey riot of 2020... 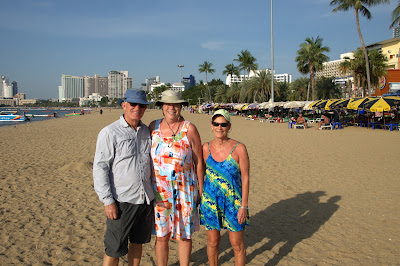 We walked past money exchanging madness, brothel shops filled with 30 or 40 prostitutes, prostitutes on scooters, prostitutes hanging with school kids and it was not even 5 PM yet, apparently the crazies really gets going at 7PM.  We got picked up at 530, you could loose a body part down there, or them monkeys.  We got two boxes of antibiotics and a tweezers, and were safely out of town.  We lead a sheltered life, (well okay).  At 7PM I was safely in the confines of our little "village" having my single gin and tonic for the night, Silja was out cold by 8, and I am typing this listening for nightjars.
I did leave Pattaya with a question.  Mucalinda, a 9 headed serpent thing (Naga) came to protect Buddha after his enlightenment.  I am not sure why he would need protection after enlightenment but that is another question for another day.  But you offer Mucalinda, Red Fanta flavored soda?
Not Coke, not Grape Nehi, even the Fanta Orange.....just this really crappy red stuff, and not just here, the only soda I saw offered to the being at any temple was Red Fanta.... 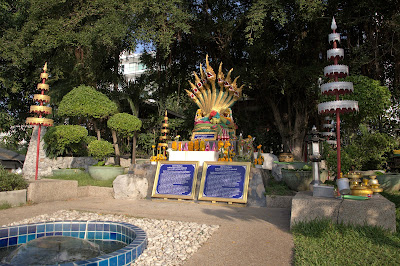 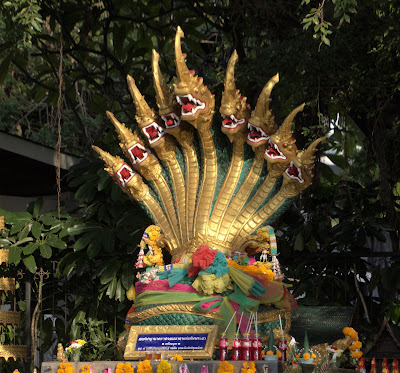 We are staying put with the blissful tranquil spot interrupted with the squeal of a newly slaughtered pig (a hog butchering facility is next door).  Or the organic delivery scooter. 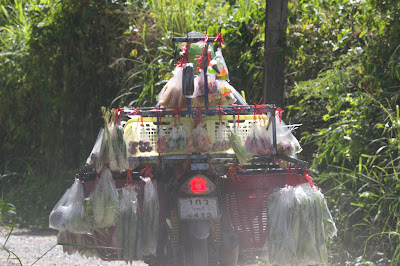 Look at that, locally grown, organic, and individually wrapped in plastic.....got to love it
So, a bit disjointed and weird, but I have been ill.
31 lifers for both of my lists (you know what lists), should get some more, then off to Bhutan next week
Olaf