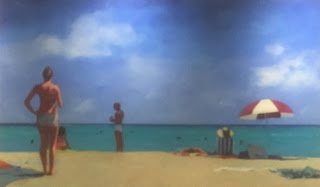 If I was writing a book on this big year, and it could be titled as anything from the Biggest Big Year to Psycho 2, I certainly even wouldn’t know what to title this chapter.  It was a bit of an odd trip to South Florida.  It was a stakeout trip, not a bird chasing trip.  I guess, in retrospect, it was not a good idea.  In the end, I had not one but two days at sea weathered out—wind and waves, making 7 for the year now, well sort of, one was uncanceled.  I might have gone on the Yankee Freedom II to the Dry Tortugas just to see what was out there, except that it was pulled out of the water this week for a Coast Guard inspection, and won’t run again until at least November 7th.

So, I went to south Florida but the only beach I saw was at the Delta Lounge in Miami
(picture above) Life certainly is a Beach…

I hired a guide, Larry Manfredi, local guru for no other purpose than I like Larry and maybe, just maybe we’d stumble upon something.  What we stumbled upon was a wonderful German restaurant and it served my favorite beer.  Now, I’ve written about beer before, Erdinger is a beer rarely served in the USA and there are only two 2 places I have found that have my favorite beer on tap—the Black Forest Inn in Minneapolis, not infrequent spot of the Birds and Beers meetings, and Lucy’s in Key Largo, Florida.

So Larry and I, drank beer for lunch.  In 290 odd days of this big year, this has never happened outside of an airport leaving somewhere.  So another oddity, I drank my lifer beer before I saw the bird.  Now understand, this is no ordinary beer.  I have had special glasses shipped to me.  I have gone to Munich for no other reason than to go to Therme Erding Spa so I can strip off and drink this beer.  With Erdinger hefe-Weiss, I can block out any issues of the day, even a day of slow birding.

Larry and I had, what could be said, was a pretty good day of seeing stuff, just not year bird kind of birding day, but we saw cool avians....we saw a nice yellow Philadelphia vireo, 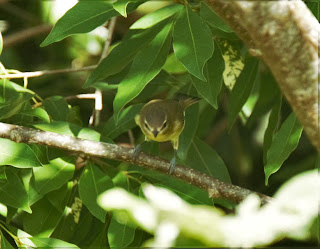 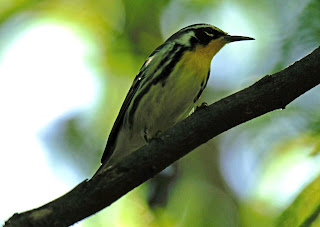 Painted buntings…always a tough bird for me to photograph 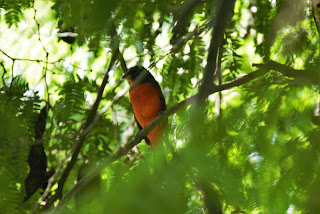 Then we ended up in the middle of the biggest day of falcons and sharp shinned hawks migrating, I have ever seen, wow!  The kestrels and merlins were about 1 every 20 seconds and at times I could see twenty sharp-shinned hawks in one view.  We also saw Mississippi kites, always a good Florida bird, for me, a good bird anywhere. 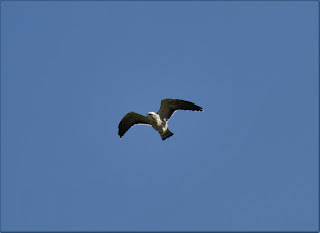 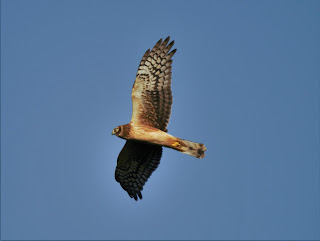 It was just a lovely day of birding.  I can’t recall when I have had so much fun birding.  It was a wonderful day off from…birding….?

Towards the end of the day, sneaking around, Larry thought possibly we heard a single call of a La Sagra’s flycatcher, then I heard a single call.  We waited until dark but nothing showed up, or spoke up. Disappointed, we went back for more beer.  I returned to Long Key in the morning to both get a second listen for a possible rare flycatcher but also to check for the Key West quail dove (I saw one here in 2015), and maybe see a fly-by Bahama swallow.

Well, I heard a flycatcher right away but it wasn’t close, I couldn’t record it, and well, I don’t even think it was a La Sagra’s, so it was all a moot exercise.  I hiked the trails, but didn’t see a single dove, of any stripe.  In fact it wasn’t very birdy at all.  Things were moving past my two observation locations, I saw probably 2500 swallows photographed over a hundred as they sped over me.  I got shots of a couple of martins, of the purple variety all of which probably should have gone through by now but nobody told these birds.  I saw every species of common swallow occurring in the eastern USA, even cave swallows, and then in the middle of this orgy of swallows and hawks, and then something else.

This swallow had a forked tail, was bluish on tail and wings, the wings darker, it seemed blue green on body when the sun angle was on it and underneath, white, with white even under the interior part of the wings.  It flew different, was not associated with a group and it came while I was eating a snack at my swallow vantage-point.  I saw it as it flew right over me, curving out to the ocean.  “Oh s&%t!”  I said.  I saw it and knew what it was.  The trail bar went flying as I grabbed my camera as the bird took a single circle out over the water before heading east like all of the swallows following the keys.  It was one of the few birds that circled out there, giving me a second chance.   That enabled me to get a lone shot before the bird got too far to my right, but at least I got that. 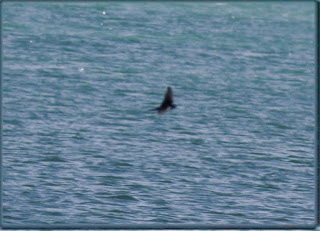 I know what I saw.  That forked tail was not from a tree swallow.  Lighter blue and much too white underneath for a barn.  The photo is bad but the white, the blue is visible, I saw white under the head but the photo is darker, not sure if head is turned, shadow, or I'm just plain wrong.....If it is a Bahama swallow...... I’ll let you guys decide….so Bahamas swallow or not?  Count it or not?  It had the field marks, just getting good photos of a fly by swallow…..tough.

The guys at the hawk watch at Curry Hammock have seen some strange swallows/ martins this year, some forever unknown.  I think a mangrove swallow was identified, some were probably just Purple Martins, though.  So odd things are moving through.  I'm almost certain, I'm adding it to my lifer list (drank the lifer beer ahead of time) but here days later, I haven't even posted the checklist.

I stood and/or hiked for 10 hours and I was dog tired when I got back to Florida City.  My private pelagic for Sunday scrapped due to wind/ waves, mine on Monday the same so well, it was time to bug out.  Up in LaGuardia I learned the small craft warnings for Key West………..were for really small craft and they were going out, crap, and the entire city of Key West due to Fantasyfest overrun with naked people with a little body-paint on them... 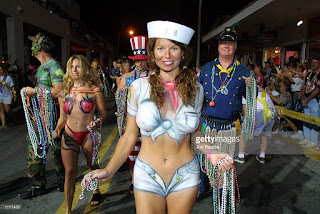 from Getty Images of Parade

The Navy seems to have changed a little.  I could have been feeling at home but how do you paint a naked birder?  Maybe I should have been a blue-footed booby?  (Is the Booby the clothed guy dressed like a boy scout? IMHO he could be, unless he is around to help the naked drunk girls getting across Duval Street?)

Trying to understand my potential "costume" would be way too complicated for a bunch of drunk people on Duval Street anyways so IT IS just as well I left town and I would have been way too distracted and hung over to find any future birds.  Oddly, I got a call from the captain of the boat in Key West when I had connected up in New York, he didn’t cancel and called the captains up in Homestead, wimps, oh well, I don't think the first mate above was on his boat…next time, I guess, I have to go out to find out.

Anyhow, I have not done anything with this swallow, Larry, wishes I had a better picture, so do I, but well, it wasn’t waiting for me to get that, so as I said, I’ll let you decide, count or not.

I definitely need both more boobies and tits for this year, I think I’m good on the pecker department
off to the next spot....Alan Jackson and Jimmy Buffet say it all....

The sun is hot and that old clock is movin' slow,
An' so am I.
Work day passes like molasses in wintertime,
But it's July.
I'm gettin' paid by the hour, an' older by the minute.
My boss just pushed me over the limit.
I'd like to call him somethin',
I think I'll just call it a day.
Pour me somethin' tall an' strong,
Make it a "Hurricane" before I go insane.
It's only half-past twelve but I don't care.
It's five o'clock somewhere.

PS.  My wife thinks I sound like an alcoholic in this blog but only 2 beers were consumed for the research of this text....and I should know how to count to two...correct?