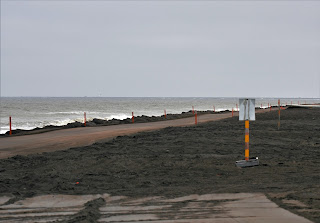 Some would say I went on a road too far, others would say the top of the world to you, maybe a road to nowhere, but I would just say whew!  I’ll say it again, whew!  Today, for the second time this month, I came to Barrow, but this time, I came, I saw, and I counted.

You know, I posted a picture of me at the dentist on Facebook yesterday.  It created quite the stir... 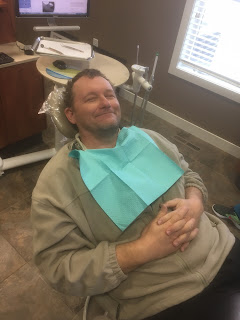 Many thought I was drugged or gassed, or others possibly mentally ill, and one even thought I was the poster child for this particular Dental office (but I love that smile!) but in reality I was laughing at the absurdity of it all. I was also laughing at the story I was going to tell Dr. Johnson. How I got from San Antonio via San Francisco, Flagstaff, St Paul Island, then Seattle and home to have this tooth checked and why. Flying home to get a dental exam from Seattle to turn around again, two days later and head back to the Arctic, just to turn around again for the west coast and God knows where to next, that is a lot of explaining.  "Birds...?"  I said, then I laughed.

Besides the dentist, what did also I do at home?  I played dad, helping navigate my daughter and friend to a Kanye West concert in Minneapolis.  They charge $40 for a $2 printed t-shirt that doesn’t say anything.  I checked out my wife’s new birch bark bag she wove at the Swedish Institute.  Good job Silja!  Here is my lovely lady with her piece of art... I think it is wonderful!  and well, while the concert was going on, we went to REI and then watched a little football on TV and other things….before that I ate at a Mexican restaurant, and I ate stuff I shouldn’t.  It caused pain.  I got better antibiotics, which worked better, and then daughter safely in hotel, I drove 221 miles home to see the dentist and then....I slept.  Pain always wears me out but I’m pretty tough.

I perplexed my dentist, just a bit.  The crack in #31 is sort of oddly placed if that is indeed a crack but something is going on, and as I lost #30 in 2nd grade (don’t ask!), I kind of need that tooth.  I lost #19 on the other side when my wife got pregnant with "L" (an even longer story, don't dare to ask) and had to sacrifice #18 as the root canal I got during lunch hour on an Oral Surgery rotation for a case of beer in 1993 had worn out last year, a year a beer, seemed good.  Ah teeth..sigh.  Dr. Johnson says I may need a big project to see if he can salvage the tooth, but it may be too deep, and he doesn't want me in the arctic, so I need to return but the pain is relaxing a bit if I avoid salsa chips.

I have more dental stories.  Just a small one here, I learned how to apply for an appeal of Minnesota In-state tuition (I was still considered a WI resident even though I married a MN resident) from a dentist who had done it before.  I tracked him down to have a crown placed in Anoka, MN.  He worked on my tooth and spoke of what to write, what letters to get, and where to send it and I took notes from the chair.  That was 1991 and it saved me $24,000.  Fixing a tooth was really worth $24,000, the key was knowing who to go to.  I kid you not.  In his case the committee made up of two students, the head of janitorial services, a low level VP and two faculty members approved the appeal and refunded his whole 4 years of out of state dental school tuition in one big check.  In my case I only got 2 years short a quarter reduced to in state tuition rates but it was a great deal, that only a few knew existed.  The year before I started Med School, Wisconsin and Minnesota had tuition reciprocity but that ended during a budget crisis that eventually caused Jesse Ventura to become Governor of the mosquito laden state. That was much better than the $200 I saved on my lunch hour root canal project, but heck, money is money.

Well, my tooth problems are minuscule and insignificant to the many women who are and have been suffering from breast cancer.  It is breast cancer awareness month and we all are supporting it, even the NFL, so I’m thinking pink.  I’m buying the pink lemonade on Delta, and well, I’m up here in Barrow looking for a pink gull.  It is all pink to me… 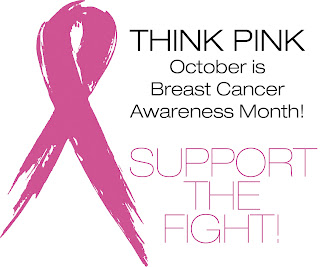 As an aside, I have seen many women with breast cancer.  In some cases some of the most horrific cases you could imagine.  I’ve removed breasts.  I’ve done plastic reconstruction.  I’ve seen the horror that is this cancer and have truly seen the look in many women’s eyes of the dejection that the diagnosis I’ve given them has left them.   People are NOT happy when you tell them they have colon or even skin cancer but breast cancer has a connotation that is different, it is like they fear losing their identity.  I’ve also seen many many women “cured” and out 20 years that have had a stress event in their lives that has caused the long dormant cancer to return.  It is not a good entity.  To be honest, the actual cures haven’t came easily for this disease and the best thing is early diagnosis of this animal so that is what I hope to encourage you to do, if you are reading this.  Mammograms, self-exams (even partner exams if that can help you to do it, why not make it fun!), need to be done as ignoring this is NOT the answer, it is out there and it kills.

One of my very and much too young office workers “Mindy” to have breast ca just finished the whole triple therapy of surgery, radiation and chemo, and luckily is doing well.  Many of you have seen me wear that t-shirt as I proudly support her during her plight.  I still am! 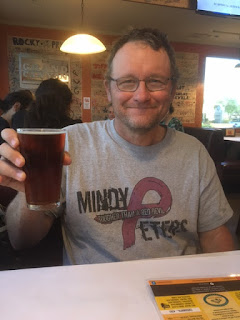 Way to fight this Mindy!!

With all of this breast cancer awareness, not to mention my tooth issues, it is hard to think about flying way up here to get into a pink bird.  I flew into Barrow again this morning in a paucity of Ross’s Gull reports all fall and well, 20 minutes after arriving, bingo, got them, a few minutes later I got a better and closer flock which I chased down the road.  I got stuck behind a local, but got a couple of photos before they crossed the point heading towards Canada.  I had a problem though.  I forgot to put the car in park, and standing outside, trying to take pictures, I got hit by the door as the car rolled backwards and got wedged under the car a little before I got secured and could push it enough to get in and hit the brakes.  The flock was well east of me by then.  It seems, it is always something with me.

No complaints….I saw 31 in total, here is a few flying at distance.  No looking at a bad photo and trying to second guess an ID.  I'm sure the previous gull a week ago was a Ross's but I did the right thing to return. 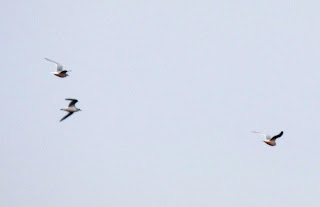 Here is a first year bird, see it still has black wing tips and the top of the wing markings that is typical for many small gulls. 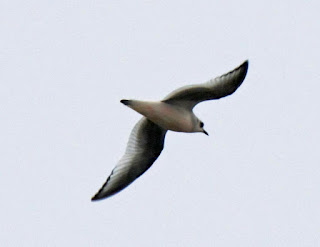 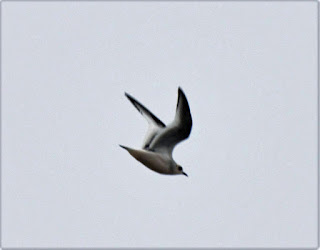 I also saw a hard to get ivory gull but at distance and I lost it trying to get camera on it but I had the bird already for the year, but to blaspheme a fish…wahoo!  Lifer beer tonight! 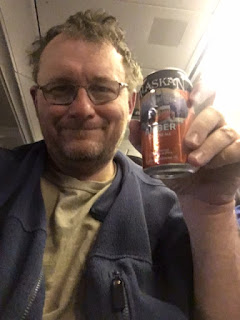 Well, drank it on the plane back to Anchorage already, and I am having a bad hair evening, but gull is in hand.  I was happy to have ticked the gull, I’m still smiling at the northernmost football field in America. 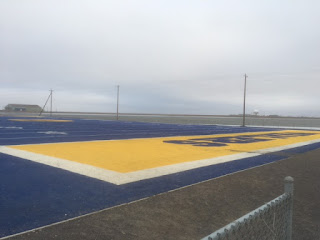 I have to say, Barrow people are the friendliest.  I had a nice chat at UIC Car rentals.  I guess they have quotaed out on whales harvesting 10 this year…I saw one the previous trip lucky me.  They are warning about polar bears in town, I saw none today, thankfully.  Less bears more often, I say.  The young man at UIC was more mad at an arctic fox in town last night than bears, as they can bite and carry rabies, bears can bite and carry your (carc)ass off.

So that is the story.  I need to go back and get my tooth explored when I have more time than a day in case things go bad and whatever I do, I can’t be in isolated northern Alaska…

And I hope I have made you a little more aware of breast cancer….get screened!  Or watch the dog or kids so your woman can go get screened…. 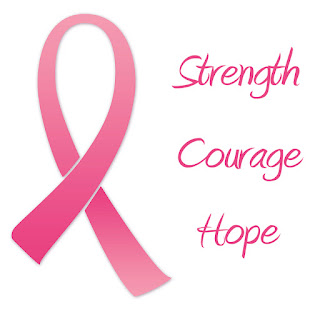