Lektastic on a Frozen Prairie 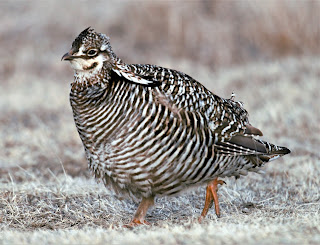 Try finding a place to get some food before 6am?  Try finding a convenience store on the main drag open to get coffee before 6am....it was almost as hard as trying to find a politician to actaully want to do anything.

I just returned from Big Bend Texas, and despite the cold, the snow, the absence of spring, the birding MUST go on.  Every year, I go to a Lek to see prairie grouse, sometimes more than one.  Last year it was sage grouse, this year...  Barry Parkin, a friend from Aberdeen made an appointment a while back for a lek south of Pierre in the Ft Pierre National Grasslands, so despite a short turn around, I promised so, off we went. Our reason to be in the state capital.  Besides, I need something to write about next week in the Watertown Public Opinion, my three fans need me.

Our back-up day was Monday and since we are expecting a foot of snow, despite the cold weather, off we went to see the glory of spring.  I talked Tony Maunu, State Trooper from Pierre to come along because misery, loves company.  The wind...30 mph out of the northwest, the temp, 9 degrees, and the wind chill, minus 16 degrees....this is April 6th folks....is it really April?  I've rarely go ice fishing this cold, in fact, we could have went ice fishing.  Everything is still frozen

We went, I parked the truck and ran for the blind since it was so cold, we crawled in the box and literally a few moments later the erie sounds of spring on the prairie echoed through the howling wind.  It was cold, colder than a witch's ti....chickadee.  We brought with a space heater and we were still cold.

The birds were doing their thing, 10 chickens, 2 sharptails and a mutt, it was so nasty you could tell they were only going through the motions, a daily ritual that had to be done.  They almost seemed relieved when something flushed them away, and in their absence we also snuck away, since I was down to feeling only two toes.

Scenes from the lek, 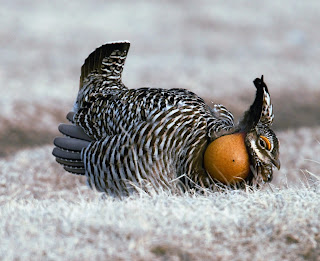 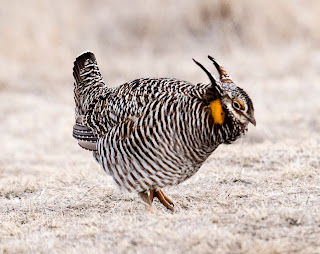 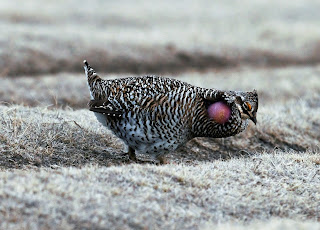 Some hen apparently went to the wrong side of the lek, and well, this poor bugger came out.  he didn't know whether to stomp or dance.  He wanted to run around but then he just stopped and clucked.  The male GPCX just wanted to beat on him.....prairie mutts....

here is a peripheral male staring that mutt down 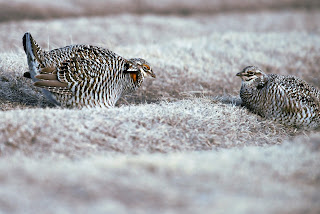 It was Tony's first lek, and he looked enthralled despite the weather, literally in over 20 leks, the coldest ever.  considering how I sometimes bird...that is saying something.

Later it was off to scout for something new.  The waterfowl are stacked up here, and besides seeing the first marbled godwit seen in South dakota this year, nothing much is around.

.We ran into Rickey Olson at the Oahe dam and since 150 miles away someone this week had reported long-billed curlew, we decided to go into the prairie and look, as futile as it seemed. Like finding a needle in a haystack, but I'm lucky so  he gave us a couple of roads in Stanley County maybe 60 miles to search, so off Barry and I went.  Ten miles away
I exclaimed..."got one!"

We had found a pair.....luck is not a lady, it is Olaf and Barry 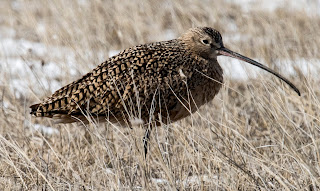 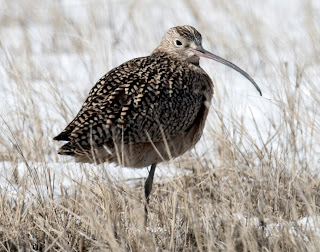 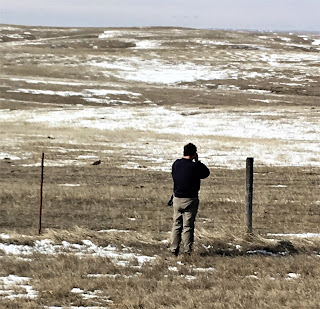 It was still cold out there

I drove the five hours back from Eagle Butte on the Cheyenne River Indian Reservation, 20 miles from home I saw my first live snowy owl in South Dakota this year sitting in a tree (seen others in MN, ND, MB) and I instinctively slammed on the brakes.  The road near Summit SD was ice covered due to our ground blizzard and I skidded in my truck, and I straightened it out, unfortunately my Nikon went flying around, and something broke........

So these ended up being costly birds, and the camera shop will be in my future..dang.

As the sign at my office's Accounting department says, as well as with Olaf, "Everyone Counts!"
i count, you count, we all count....one more tick......

Put on your booties cause it is cooold out there!  It is cold out there every day.  I'll tell you about this weather.  It is going to be cold, gray, and it will last for the rest of your life!
Spring..it is never going to come, NEVER!