Trumpetting Successes of the Eighties 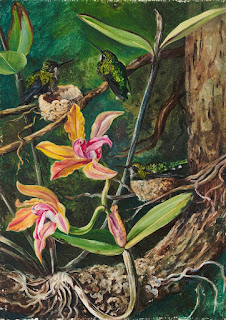 The Eighties called last week but unlike the 2014 Radioshack commercial, they didn't want their store back and in fact, they also didn't want me back.  To be honest, I didn't want to answer, and I don't want to go back but then they kept calling.....so it was an odd week at the ranch to say the least.

Truth be told, my rare bird alert called, with a fan-tailed warbler in Arizona, and at first I couldn't go because...the airport was closed. ..and then my father in law had stroke, and  nowThursday is my daughter's 18th birthday...so no Arizona for me before maybe Friday.

But while I was stuck, I had a bit of a flashback to the Eighties, on Friday as I noted, the STORM OF DOOM showed up and dumped more than a foot of snow out here on the snow we already had.  Minneapolis broke their April record of snow that was set way back in April 1983.  That was a snowy year as the suckers ran late and in March, my high school burnt, changing my life forever.  Honestly, it did.

On Sunday, in some sort of flashback, I went over to colleague Troy's house, and we watched "Valley Girl."  Yes, the 1983 classic.  Troy seems to have embraced 1980s cinema which I'd add, poor Troy.  Valley Girl grossed 18 million more than 7 times the cost of making it, so it was a commercial success, and after a wine, I was a good laugh.

Thirty years ago this week, 1988. back at Ripon College, I presented my Senior Seminar in Art History.  If you had guessed I was an Art History Major in College...you'd have guessed WRONG.  So Why was I in a major's only class to present and provide a defense of an undergraduate thesis with a bunch of Senior Art Majors.  Technically I was thinking about being an art major, but in my sophomore year, my Drawing I prof. kept loosing my portfolios, I got an "A" after I was given an incomplete after I produced a receipt in a confrontation in her office to complain of her losing my semester of work.  I was on my way to the Dean.  I was not sure if I deserved an "A" but I had completed all of my assignments.  I had her in a corner for that class but I soon surmised that taking more art classes with her would jeopardize my college career.  I switched to an ecology second major and forgot about art.  Which wasn't good.  Thinking my 4 years of competitive speech would cover my fine arts requirement, I avoided the entire building like the plague.  It was the second day of my final semester in College when the Academic Dean sent for me.  They knew me from my days on student councils, I was good at finding loopholes.  They had come prepared with all the rules, policies, and everything.  It was like a legal briefing.  Forensics didn't count as I had not competed for credit the first semester of my freshman year, and the fact that I was going to nationals and the TA for speech didn't matter.  The rule required a full 4 years.  It was clear, I needed an art class to finish off a year in a subject.  Oil painting sat over my PChem lab.  Another class was on the hour of my "Women in Psychology" class, another requirement.  The Dean then smiled, "Olaf" I think you should complete a theme, having almost a "woman's studies minor" will round you out."
"What do you mean?"  I asked.  I'll only have three classes in that.  I'd had an Archeology class on woman's roles in societies, and another on Women radicals in History.

He made a call.  He told me that they'd forgive the single credit I'd be short (it was just a two credit class), if I survived and passed, if I did I deserved it, I thought he was joking.  Twenty minutes later, I was in the Library in a room I never knew existed as a member of the toughest class I ever had, in any level of study.  Pathology in Medical School was easier.  Thermodynamics in Physics...easier.  Even my Gynecology rotation at a women's clinic was easier, albeit slightly

"Women in Art Seminar"  Was the name of the class

I was the only male in a class of women art majors hating males.  The professor just gave me the look as I sat down.  Everyone moved away from where I sat.  No one wanted any part of me.  I didn't even recognize a single soul in that room.  I was truly alone.  I sat on the left and the other nine majors sat on the right.  It was two hours that from beginning to end, I took a beating personally and generally from who I was, and what sex I was and what I said.  My women Psych class was right after this on one of the days and I was so keyed up on similar issues, I could have taught that class.

I gave a paper on my favorite woman French artist which I learned wasn't graded as it all relied on my presentation at the end of the term and the open ended defense that followed.  The professor looked at me and gave me a date.  It was my date of Doom.

I had presented my summer research from Iowa on Leaf-cutting ants early in the fall for my Chemistry Major and speaking for me was easy.  My day came.  I had worked hard on my topic but then my professor introduced me to a gathering of all the majors, all the faculty (even the one who I had to use the receipt for).

"Next is Olaf.  He is neither an art major nor a woman.  He is only in this class as a special favor for the dean.  His entire graduation from college, depends on us passing him.  His subject:  Woman in Wildlife Art.  That is going to be a tough order as first, I don't think any of us consider wildlife art ART.  Secondly, his subject person, Marianne North doesn't appear to even be an artist, and third of all, he is a male, and how could a male even understand the plight of women in the arts?"  She looked at me.  "I have a feeling we'll be seeing Olaf in an art class next term."

I wasn't through my introduction and this slide caused an interruption as it was considered sexist and misogynist. 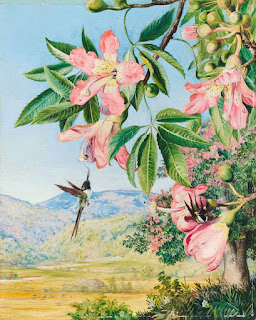 The hummingbird was considered the male and was "controlling" its stable of vaginas (flowers) in a chauvinist manner.  "Do you believe in Sexual Slavery?"  One of the professors asked me.  This was two days after we were in Chicago studying Georgia O'Keeffe flower paintings which were presented as "extremely pro-feminist."

It was an OMG moment but the women psychology class had helped me as for two hours they used my plight to get me ready for all complaints and questions.  I had pictures of female birds in flowers for just such a question.  I'm not even going to say what my reply was.  It was a tough slog, and in the end miraculously, I got an "A."  On my one sentence written comment on my grade.  "Never have had someone so involved in the class."  Yes, because I was emasculated on a moment by moment basis.

I'd forgotten about my subject artist, even forgotten her name, and then on Saturday, while watching the story of another Victorian era and later Woman adventurer, Gertrude Bell, "Queen of the Desert" the woman who knew the Middle East circa WWI like no other and was a king maker in the region, the name came back to me.

Marianne North, 1830-1890, was probably the best botanical painter of her era, and maybe ever.  By herself, she decided to just travel and paint heading on around the world adventures when she had the funds.  Forsaking marriage as she put it for her painting, she saw things that in some cases, that now no longer are even found.  She went everywhere, and brought back wood from all of the trees she saw and was a prolific painter, only painting for documentation never selling a single painting.  Her flowers are stunning. All of her work 830 paintings and her collection of wood now hangs at the Kew Gardens in London, 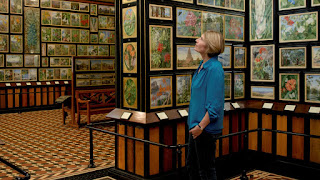 The Kew Gardens, a place that all of my english friends have been to but her museum there since before 1890, to a person, no one has ever seen. 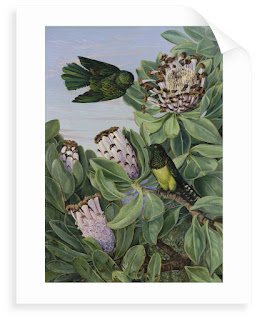 Most of them don't have birds in them, but Ms. North's wanderlust made me enjoy nature and made me want to go and see stuff.  I'm glad her name came to me.  Now I want to go to London and see her museum, I missed it when I was there last, since I couldn't remember her name.  Thankfully, Nicole Kidman's portrayal of Gertrude Bell jogged the Eighties memory as traumatic that it was and now I can enjoy her work again.  Like Bell, North is one of those people you just never hear of.

The Eighties kept calling....
\
It was 1989, a biologist plucked a viable egg from a nest in Alaska and shortly, this and other swan eggs were on a Kohler Faucet  private plane from Fairbanks to Wisconsin.  This bird was reintroduced six miles north of where I grew up later that year and in 2014, was seen by biologists and by me, on the Wood River across the lake from my parents, 82K is the name of the oldest living Wisconsin trumpeter swan and now lives between Indiana and NW Wisconsin.

If you don't know the story, in the Thirties, the trumpeter numbers were thought down to 70 birds and extinction was thought imminent.  The last one in Wisconsin was seen near Oconto, then they found a remnant population of 2000 birds in Alaska, protected them and allowed them to come back and they reintroduced them back into the lower 48.

As I started birding heavily after college, I grew accustomed to seeing trumpeters, they lounged on nearby fields, flew over my parents house, and swam in the local lakes marshes and rivers, but this was a success story.  I see more trumpeter swans in Burnett County Wisconsin than I see house sparrows.  I have all sorts of photos 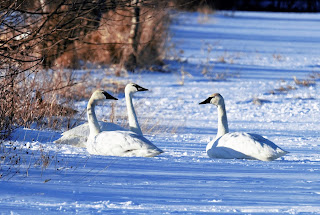 But I have never seen one in South Dakota.  So it was with some surprise that I stopped on Sunday to scan a slushy low spot in a corn field after digging out from the Doom Storm to scope some swans and I actually saw some. 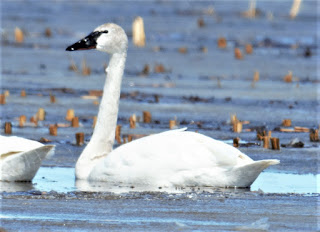 Of course there were some tundra swans mixed in the two flocks, but there were quite a few trumpeters, too 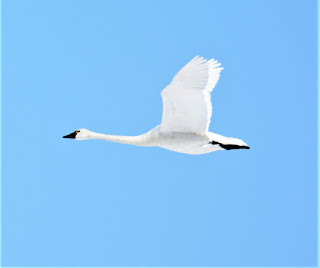 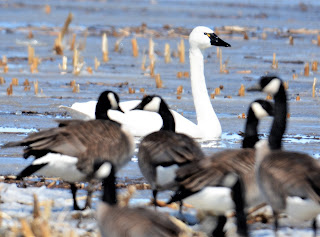 But I had it, state bird #294  trumpeter swan, one more on the list, got to love those swans. Not s fan-tailed but hopefully it will stick.  Sixth report of them in SD this year, so not rare rare, but not an easy bird either 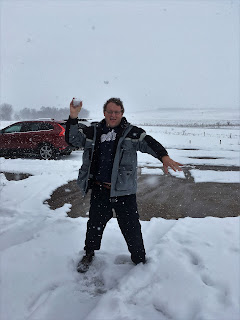 Snow willing, on Friday, I'm going somewhere where there is 1) no snow, and 2) spring and 3) birds
did I say I'm sick of snow?