Chili-dippin' down in the desert 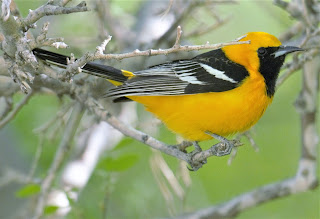 An odd thing happened on my way to a bird.....Murphy Rules.

Word went out last weekend that a fan-tailed warbler was a foot in Arizona, unfortunately Sioux falls airport was closed and so was Minneapolis and we were snow bound, then on Monday my father-in-law had a stroke...luckily, a small one as they say.  Then Thursday was my daughter's 18th birthday.
all this and my camera hasn't returned from being repaired yet.  Friday, I got the green light, unfortunately, the bird no showed Thursday and I didn't get word until 0230 when I was heading south to a 5 am departure to Tucson by way of Minneapolis and Salt Lake City.  I got on the plane on time

...and then it happened.  there was a wire hanging from the door.  The pilot delayed pull back, and then as it seemed the mechanic was still in bed, we deplaned.........I went for breakfast after the gate agent rebooked me to Phoenix.  Delay was supposed to be an hour 45, Then came an urgent call to get back on the plane, my breakfast hadn''t arrived so scrapping that, I raced back to plane, all was not lost....I boarded......then as we pushed back, the generator wouldn't go.  So we sat and sat, Phoenix flight looked doubtful...then gone.   I rebooked to Tucson, this time on the non-stop which didn't leave Mpls until 11am.   It got going knocking out the TV/ video screens.  I got to Minneapolis....then we boarded the TUS flight and right in front of me was the maintenance guy.... 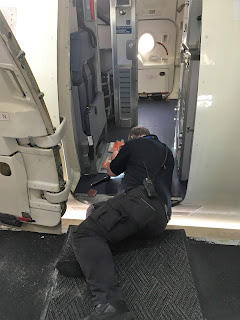 The holder of the flashlight in the emergency kit had broken, I watched for 30 minutes as he fixed it, and for a moment, even held a part for him, everyone needs to be able to pitch in to get a plane off these days apparently....eventually though late, we left, at Tucson, my rental car reservation was lost, as was small SUVs......by the time I rolled into Portal AZ, at 1630, and found the home of Rick and Nancy Taylor, the site of the fan-tailed warbler, I had no hope of the bird and the chase in general was long since doomed...but there I was on a quick trip for no singular purpose. 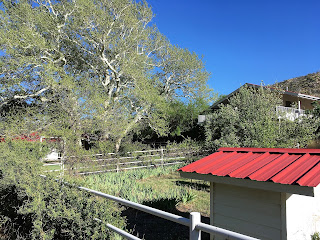 I sat there and met the nice couple of alpha-birders and watched the hooded oriole (above) and began to think about what I was doing.....truly doing

In my worldly travels I've met some people with some really strange hobbies, really strange./ some are so off the wall that I'd hazard to even present them here.  There is this doctor I know (but he doesn't work with my company) that collects everything tanks, tank pictures, model tanks, uniforms, and he even has a full-scale working Russian T-35 in his shed.  of course there are the pathologists with reams of odd tissues and tattoo pictures.

Then there are the people I met in Europe, oddly watch them quickly strip bare in front of the Vatican who have collected naked pictures of (usually their wives but not always) in front of world heritage sights, like the Pyramids, the Louvre, Notre Dame, The Obelisk at the vatican, Mt Rushmore etc, .  They were shockingly efficient.  On a same vein, I know of someone who does this in front of "Welcome to State" signs. Those are odd hobbies....

I'll pose a question here, what ARE the most pointless hobbies?  Truly hobbies that one sits and wonders...really?

here are 10 I'm thinking of...feel free to add some

10)  Train spotting.   The hardcore of this endeavor keep tack of train car and engine numbers, they are train listers....so to speak....they do photograph drive bys, drive or fly thousands of miles if a certain engine is brought out for a workout from retirement....and after 9-1-1 had to watch out for the ire of Homeland Security and the FBI.  TRAINS Magazine is a popular read for these people.  I must confess, I subscribed for about six years. 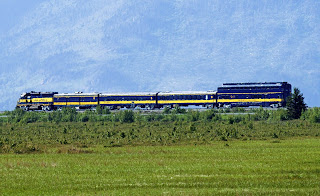 Don't ask why I took this picture in Alaska  or any of my train pictures, I've only gone twice to chase a train, and one of those ended up with me bringing my son (four at the time)  to an ER.
.
There are ship spotters, license plate spotters, car spotters, plane spotters, they'd all be in this category.

9)  Pooh Sticks.  This is a game from Winnie the Pooh.  You take a stick, personalize it in some way, go to a bridge with your buddies or even alone.  Throw in sticks first to an arbitrary point wins.  Now a good kid game but there is a world championship in England somewhere for adults. I haven't done this in 40 years.  this proves my belief that they will have a championship in anything...but for this?

8)  Beer can collecting.  Let me describe some pitfalls of this.  HARD to display and harder to explain.  Let me just say that I was a member of the Beer Can Collectors of America, now Brewery Collectors Club of America...at aged twelve.  My first publication was in the club magazine.   My photo of an old brewery in Sheridan, WY.  I got a book with defunct brewery addresses.

Somewhere now in retrospect tI think his was like candy cigarettes, and I wonder if Miller Brewing had some fingerprint in the formation of the hobby.  Pinholed from bottom opened cans used to be worth more.  I got a multi cubic meter collection of stuff.  When I found myself bidding down to the last cent in my checking account for the sign on top of the defunt Chief Oshkosh Brewery in Oshkosh Wisconsin, I took a deep pause.  There are large conventions and over 100 chapter clubs...still.

7)  Match book collecting, much like above, mostly in support of cigarette industry, I had found myself with 10 gallons of rather unique matchbooks as a kid.  Now I just wonder why?

5) Making candles out of one's own ear wax.  I had a patient come in once and when I cleaned out a plugged ear, I was ordered to return her ear wax.  She had candles from all sorts of people.....let me just say this here, this was a really weird hobby.

4) Cup stacking.  Also called Sport stacking.  They have a world governing body. Timed event to stack up usually plastic cups into a pyramid and then back into pile.  A very competitive event, sort of like martial arts for people who do not desire contact.  Best women in world are all Asians for some odd reason.

3) Geo cashing.   Finding a hidden stash at some GPS point, one thing to do this locally but I know people who go around the world just for this...?  At least the sights are real, unlike

2) Pokemon Go.  Like catching a mythical thing at a mythical site, placed at some random point by a computer.....virtual birding will be next

Okay, just going out in nature to see and appreciate birds is a wonderful hobby, not to be confused with bird watching but militant OCD bird listing

Yesterday, vanquished of the target bird I was driving down the the state line of New Mexico and Arizona.  State-line road.  I see an Osprey, not a great bird, but heck, a fish eater in the desert... 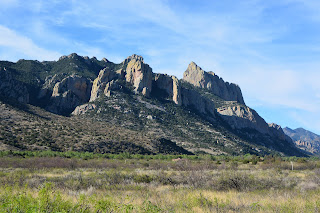 About a mile farther along, I come up to birders on the road.  They got Brewers sparrows, they ask me what I got.  ""An Osprey back on the west side of the road a mile".....I say.

"We are only birding in New Mexico, what is on that said of the road, doesn't matter."

I drive on, two miles father, I stumble upon another car.  We roll down windows.  They ask me what I have seen....brewers sparrow down on the left.

"left?"  The man exclaims.   "New Mexico doesn't exist in our car..  It might as well be Mexico."  I then tell them about the osprey and they speed off to count it.

well....I did see some interesting birds, I spent a day and a half wondering aimlessly around SE Arizona, looking for some cool things 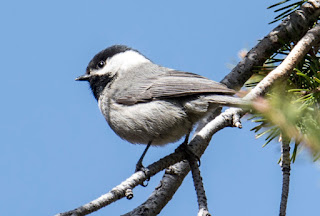 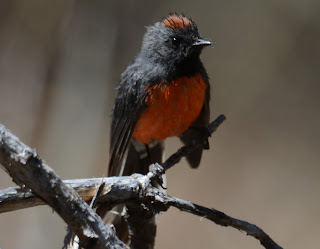 Actually a code 4 bird, I've seen before, possibly even the same bird.  I met a fan of mine, Sam from Santa Fe, it was a lifer bird for him.  I was so honored when at noon, he asked me to share a lifer bird with him.  Cheers! 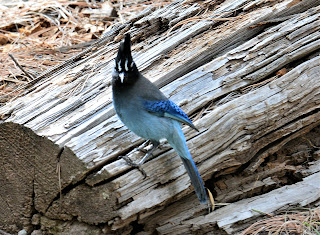 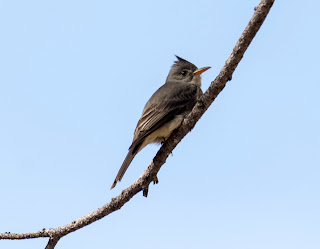 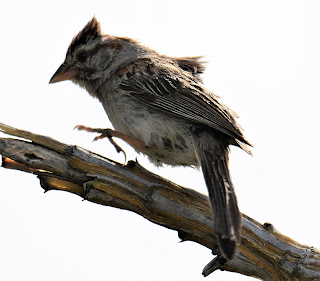 pretty isolated distribution and a bird I always like to find 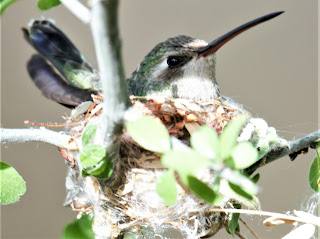 I met my friend Thor for breakfast coffee today and he gave me some intel on a Tubac rose-throated becard, a bird, I'd seen in AZ, but a cool one, so I went after it.  There is a pair in the cottonwoods and she is on her nest.

It took some doing but I found her nest..... 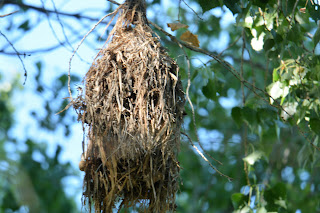 Maybe  I heard the male, but saw nothing and then had to scram for my plane.  I did see some things that made me think 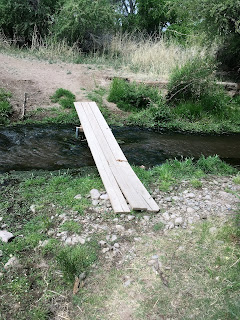 I pretty scary bridge to walk across, and in fact I chickened out and I learned, the car bridge nearby is so afraid of birders we got are own walkway with hazzard guards.  I never saw a car use this bridge either.. 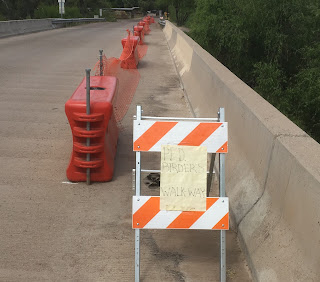 Even the local people in Tubac know that birders a to be feared.

Initially I thought I nabbed a thick-billed kingbird, although, on looking at the photo, I' started hesitating on it, It's dark bit the bill looks too small, but the bird is so dark, with a forked tail, hard to think what else it would be besides a Cassin's Kingbird? 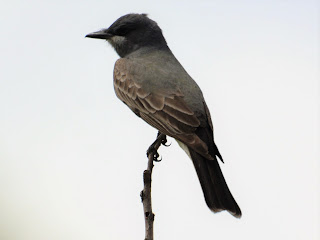 Pointless and without hope, the chilidippin' bird chase

PS  I booked myself at the wrong lodge, DD Gamble Ranch Lodge south of Rodeo, but in AZ, quite a surprisingly nice place, they even fed me. 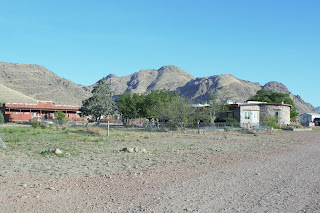 If you are down this way, I'd recommend it.