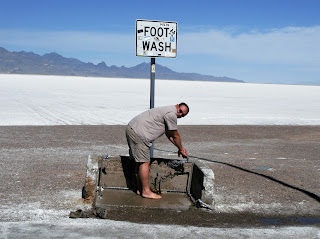 It has been said that Olaf never passes up a footwash. that is true.  I also would say that I do not particularly like Utah. They hate dogs...yes they hate dogs, banning them from the Wasatch Valley, and Utah's motto"Life Elevated" really bugs me as they seem smug about it.  As such, I prefer never to spend any money there, and this footwash at the Bonneville Salt Flats served to wash the stench of it off me.

Do people only wash ONE foot in these things?  I had a foot, another foot, some dog "foots" and as they had a wash, I washed.  I was thinking, why don't they call it a feetwash? If you have a lot of foots, isn't that a lot of feet?  I don't know.

Well we are a thousand miles farther down the road and we learned a lot in Wyoming, valuable RV teaching points.

It blew, and after being pushed around by 40mph winds we holed up in Rawlins and it passed.
to avoid this we learned to keep birder hours, on the road before dawn and tucked in by early afternoon before the wind gets bad

Rawlins was so windy, it was hard to bird,harder to photograph and even deer were hiding behind hedges.  It knew to hunker down in the wind too.  This one was on the front lawn of the hospital.It hissed at my dog. 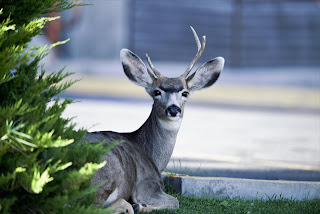 I was too pooped to go and tour the old prison.

We have a diesel.  We need to buy DEF (Diesel emission fluid).  My last diesel was a 2004, it didn't need this stuff.  DEF is urea plus water.  It crystalizes and makes a mess. It is hard to actually put in the rig.  It varies in price from about 2.79/ gallon to 10.00 a gallon.  It is all over the board.  No truck stop we've been to has a pump....that would be nice.  I'd pay more for gas just to have a pump

3) It seems there are a myriad of buttons and eventually you figure out everything...eventually

Our TV works!
It took us 14 days to get the TV to work, thankfully tonight.  We have got the Sat TV to work, but not since Nebraska, more work needs to be done.
I just figured out the bright lights
We still are perplexed by two cable hook ups, which one?  There is a button and a fan in the bedroom near the TV which we have no clue what it is for.

Back to Utah......It is a pretty state as we followed the Donner's path into the state near the ill-fated decision to follow the Hastings Cutoff rather than the normal northward loop of the California trail.  It would be the first of many mistakes. 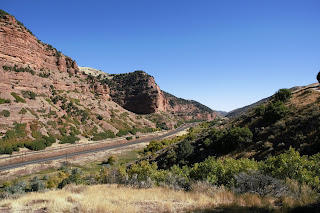 My dog and me enjoying the salt flats, sorry Utah, she will be gone straight away.  I was minding my own business when I saw something. 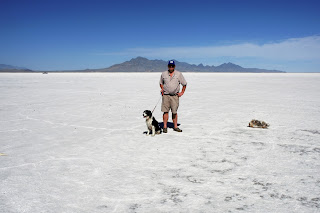 
I'm not even sure if this is the strangest thing I saw today as we see some very very strange crap. back 300 miles in Wyoming, three empty car carriers zip past us on I-80, then we see them acting strange at a rest area. Flash forward to the Bonneville Salt Flats.where I walking the dog.....the car carriers pull off the freeway onto the salt. They stop. A guy in the third rig pulls out and they line up and then, they race. Green takes the prize. have you ever seen car carriers race? 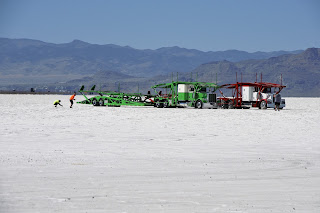 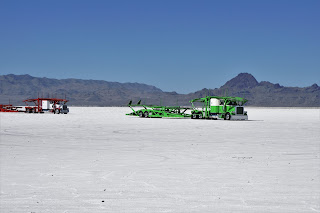 Unreal!
Then they pull onto the freeway and away they go.... 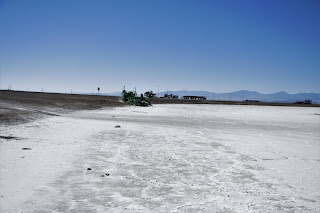 So we ended up in West Wendover....a place that has been trying to unite Wendover Utah for years.  They used to have split time zones, Wendover Utah has tried to succeed from Utah but it hasn't happened yet.  They did put West Wendover into Mountain Tine, however.  I was hear during my big year and got a good picture of the east side of Will, this year, I'm on the west side 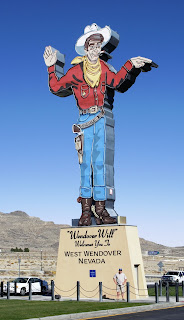 So I walk across the crosswalk and this RV just slams on the brakes in the middle of the road in the wrong lane. I watch as the woman in the front takes a picture of Will through the windshield, impervious to the traffic. Traffic stopped, they took pictures and then pulled out in front of that SUV and off they went.. 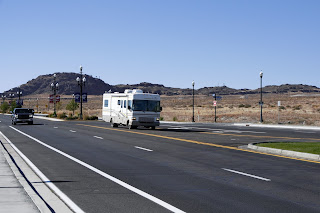 4.  RVs are big, people will try to get out of your way. If you need to block traffic, just do it.  I'm a road hazard going up and down mountain passes and I go down as slow as I go up, I put on my flashers and I don't care.  I'm like the tractor blocking the road, if you want to go faster, just go around.  From Captain Ron.  "I learned driving the Saratoga that people will just get out of your way.
I passed 4 trucks today and one car.  That was a pretty good day. Yesterday, it was only two.

The other big goings on was a strange collection of car carriers parked in Wendover carrying Teslas, they looked to be just parked there indefinitely.  Hum...makes one wonder why? 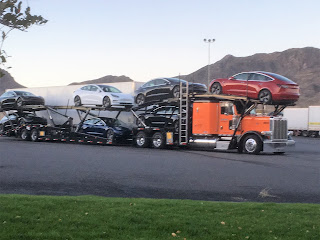 Well tomorrow we drive near Donner Pass (I80 is not on the pass as the old highway was)  Hopefully we will fare better then they did all those years ago,  We stalked up with groceries just in case.

At least my feet are clean.