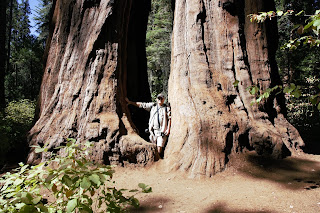 Back in 1852 as Augustus Dowd was hiking along in the western Sierras SE of Sutter's Creek where the gold rush began, he stumbled upon a bear, as he moved along either afteror being chased by the bear he stopped,  before him was a great tree, what became the first giant sequoia tree documented by the western world, the largest things ever grown in the world.  Although, as could be guessed, the "discovery tree" was cut down 2 years later and became the "big Stump", and other atrocities happened but after public outcries, a tour of the forest in 1903 by John Muir and Theodore Roosevelt, the 1000-2000 year old  trees were, in general, spared and placed in park lands.

It has been over 40 years since I last saw the great trees going up to Sequoia National park as a kid.  Those were a little larger but that should not diminish the impressive nature of the north grove of Calaveras Big Tree State Park below  Ebbets Pass near Arnold, California. 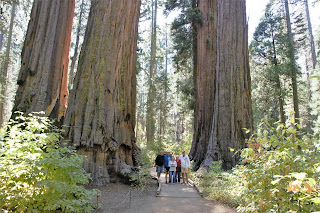 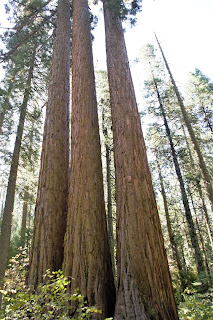 We went hiking with friends and I even took the time to give one of the old giants a great big hug. 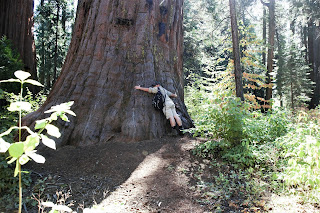 Again, the best bird was a pileated woodpecker,a state first for me, lucky to have seen it for the trails were full of loud children.   Unfortunately, it came in too close and got behind leaves. 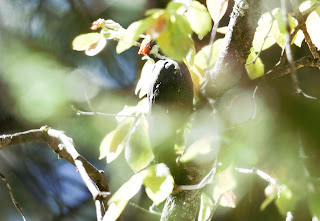 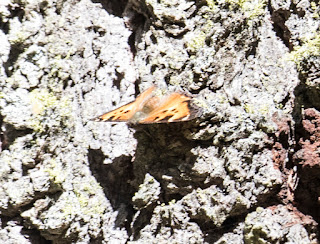 Which the effort left my shows covered in sticky pitch.  There is a downside of the big wood, and that is getting sticky feet.   Nothing gives off sap like the huge sugar pines of the Sierras.

We have enjoyed 4 days of sun and nice weather, luckily parked safely north of southern California and Tropical Storm Rosa  where we will go next weekend.  We are visiting with friends from Minneapolis who flew out here and local friends from St Martin Alan and Susan. I'm lounging watching sat TV, we have finally figured that out.  I'm doing some birding and in general, missing photo opportunities of the local flora and fauna, best photo was this juvenile black crowned night heron. 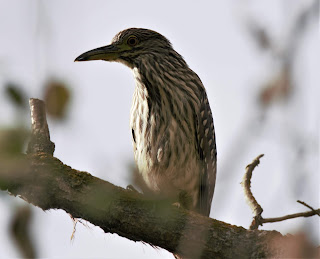 California was such a beacon to everyone back in the day, from Augustus Dowd to Leland Stanford, and the Donners.... everyone that is except a man named Matthew Stephenson.  This man a person who worked at the US Mint in Dahlonega Georgia and when most of the miners around left for California in 1849 believing the gold had played out in the Georgia hills addressed 200 men who remained and said "There is gold in them thar hills!"  He exclaimed this meaning in Georgia not California, which the phrase got corrupted to mean California in later years.

California was a land of opportunity that has been largely lost over the years.  We could never afford to live here, especially in the Bay area, but like Stephenson the "gold" can be found elsewhere....

Big trees, big wood, big adventures, and big stories....it is all California and while we will never live here, we will still enjoy the Golden State for the days we have here this fall.  Big Bird is keeping us warm and dry,and we survived the pass into the state.  Tomorrow we head to Yosemite and then off to Hollister where next weekend, we go to sea with the queen of the seabirds, the great Debi Shearwater in the hope, hope of my ABA number 800, as in this game, it is hope that keeps one looking.  I hear Anna's hummers outside fighting so I need to go.