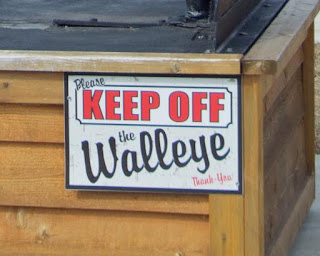 As hard as it may seem..please keep off the walleye

Okay I think tongue and cheek....reason below.

So just so some of you understand what a couple of days are like doing a big year, I thought I'd try to document two days with me.  Reading a Facebook page, many of you don't like the Movie the Big Year.  I have found it can inspire you when you are doing this, if you have nothing else to push you on, but it has flaws. What it does do to some extent is to show the hardships we all experience.  I sleep in cars, I eat on the run or skip meals, I drive long and hard. well...on the good side...I meet some interesting and new people.  Big Year Birding and birding in general is the only competitive activity that you help your competitors, well in general.  So you can get a feel for what I'm up to, here is here is a look at 48 hours with Olaf, the last 48 hours.

3/23/2016  3am Florida City
...I awake and quickly pack for my trip to the airport in Miami, skipping shower, breakfast everything, I just pack and go.  The woman working the Ramada desk, is still on... doing a 24 hour shift, she is asleep and a homeless guy has snuck into the lobby.  I take off and luckily find no traffic, even where they closed a highway.  I arrive at the rental car center at 0430.  Assuming there will be extra security from the TV warnings and the Brussels incident, I am prepared for the worst and lines, I assume wrong.  By 450, through security and waiting for Delta Sky Club to open at 5am.  I have lots of extra time.  I eat at the Sky Club, the reason I have a AMEX card, cheaper meals and coffee and free internet.  I start my blog of Florida trip.

0715 Flight to Atlanta boards, I am surprised by being upgraded to first class, but alas, no breakfast on this flight and seat 1A isn't so wonderful.  You have no leg room despite the theory of first class in seats 1 on almost all planes, especially 757s.

0845, land in Atlanta, A1, I transfer to B4, stop by this Delta Sky Club to post blog which takes too long, and just make 0910 boarding to Minneapolis in the dreaded MD80.  MD80s are the worst plane flying for room, seating, everything.  I fight with attendant to stuff my carry-on in Economy extra, which is supposed to have "guaranteed" space but the attendants have taken much of it and I almost break the door.  I took an economy extra seat instead of an aisle farther back as these planes take forever to unload.   Note to self-never take a middle seat on MD80 no matter what.

I make reservations for a rental car in Minneapolis in the air as the wi-fi generally works on this 2 hour flight.  I need one since I don't have a car there while in air and get lead on Northern saw-whet owl from Tony Lau on Facebook messenger.  Hertz, Alamo, Avis don't report having any cars so I'm forced to use Thrifty--not a favorite.  I land at 1200 and go to Thrifty and notice that a snow storm has hit Minneapolis.  The lady at Thrifty talks me into a bigger car, since my "manager's choice" is a micro car.  Then...I get the same car, I have to argue about the rate.

Eventually, I find my car and call Butch, the man with the owl in his yard.  He lives in Deerwood MN, 125 miles north of the airport.  I shrug, I've driven in worse.  Luckily, the snow clears up north of Minneapolis.  They get none up north and 7 inches at the airport.  I get three hamburgers and a coffee at McDonalds in Elk River MN, the birders lunch and keep driving north.

At Garrison MN, I stop to look at the ice on Mille Lacs lake. 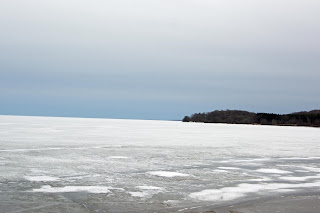 Looks like a couple of weeks of ice yet.  Deciding not to climb on it, I snapped a selfie of me with the walleye and head to Deerwood, as my owl awaits me. 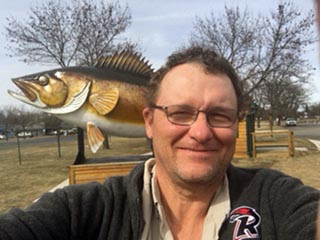 Butch Ukura lives in a nice house in a grove of trees between Deerwood and Crosby MN.  I know the area well, having both worked at Crosby Hospital 2 miles away, and Aitkin Hospital 15 miles away and also based the early parts of my novel Anders Zorn: Unveiled in Crosby. 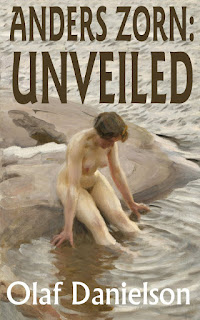 The forlorned ER doctor, Alan Zorn Evardson is the probable illegitimate great-grandson of the famous Swedish painter Anders Zorn (cover art Rodloga) and one of his models who is banished to America.  A dying Crosby ER patient offers his physician (Evardson) a way to improve his self-esteem and sets him on a life of adventure.  But enough about my writings....

I arrived as the homeowners were sitting in their garage and Butch, the ultimate birding host, took me on tour.  Unfortunately, the day before, the poor owl was being mobbed by chickadees in his front yard but was seen by 15 birders.  Today, it left but was calling during the daylight along with a second owl.  I walked around, looked in holes and then called the owl.  It was 4pm and I got two close responses, one across the road, where I couldn't trespass and one in a tree at the neighbors but that bird only responded once unlike its buddy 100 yards away.  I couldn't see it and triangulate and when Butch came out to check on me, the other owl called in the neighbors and I decided to leave the bird alone, I had it, it was witnessed, so we chatted and talked about all the local birders we knew in common.  I told a Kim Reisen story, a guide who is based nearby, and I last ran into in Nome and I left at sometime after 1700.  Ticked Bird #505.

I finally nabbed the little bugger, NSWO 4, Olaf 1, but in this game just scoring gets the X on your O, and my 12th owl was in the checklist.  Thanks Butch!!

South of Brainerd, I had another photo op....who is that man trying to get my attention? 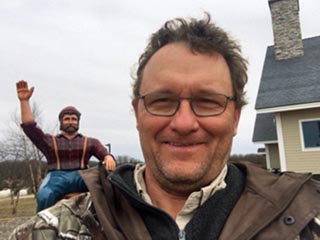 I watched the current episode of  Shameless with my wife and petted my dog and drank a single Ardbeg Scotch and was shortly out...it was a long day.

It was a restless night, especially since my son Allwin in Germany texted that his keys had arrived.  He forgot his apartment keys before he left on Monday and also apparently forgot about the 7 hour time difference...it was 430 am and unfortunately 8am came far too quickly afterwards.  Everyone overslept including my daughter, she grabbed a trail bar and out she went.

Barry Parkin had reported for the last couple days to me in Aberdeen that Baird's Sandpipers were in and hanging at the James River wetlands area off Hwy 12 east of Aberdeen.  Baird's is typically both the first and the last bird through, the alpha and the omega.  They can be easy to miss as is the White-rumped which is typically next to last each spring and also have the long wing projection but a white behind.  The bird is named after Spencer Fullerton Baird, who among other things, hiked 2100 miles on foot in 1842 around America, and collected stamps.

I decided to go and get this bird, as Chris Feeney says, "More Birds!"  I know I can rest next year.  I left Milbank at 9am for the 125 mile trip to Aberdeen.

Along the way I spotted some migratory geese east of Bristol SD, they always seem to hang there.  Most of the snow geese have come through and went on and the greater white-fronted are coming through now.  It is nice seeing both still.  They are keen looking birds. 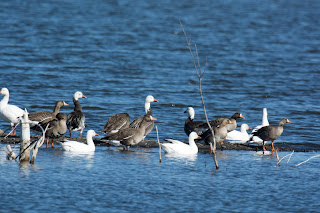 25 miles down the road, I changed to the eastbound lanes at the James River.  The overlook from the expressway wasn't a good place to bird but there and I counted just 21 Baird's tiptoeing on the ice, the pond refroze overnight in the 19 degree evening, their long primaries quite obvious and I snapped a picture.  Not good but a picture 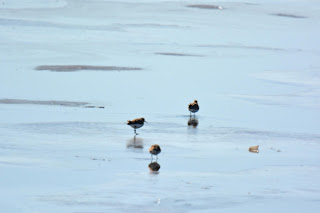 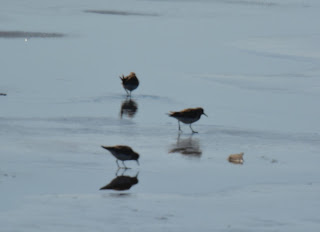 Barry wanted me to drive in to Aberdeen to look for a Harris's Sparrow with him, so after another quality birder lunch, this one at KCF, we looked at two spots in the city.  There were lots of juncoes, a Cooper's Hawk, FOY for Barry and a fallout of robins but no sparrows of any stripe.  I drove back and the Baird's were gone when I passed.  Olaf had came, seen and counted, so now they could move north to the next stopover on the way to the Arctic.

I drove back to Milbank, waiting 20 minutes for a train at the new crossing before my house and I forgot to get bird seed for my feeders.  After a return trip I loaded up my feeders 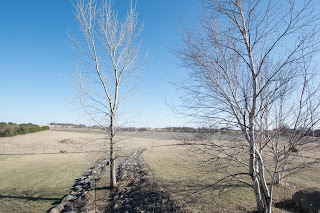 the view at the ranch looking at my feeder trees, the person watching the feeders was one of my cats, Nightmare, she said to me I needed more feed but maybe she was thinking something different than I...it was 5pm. 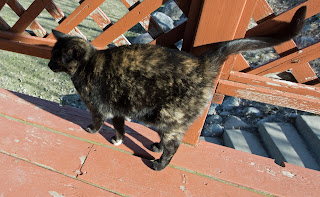 I may live out in the prairie but I may have an advantage over east/west coast birders, I have a good flyway right here, and people will struggle to get birds out here that are my backyard birds....Baird's fly right by me, they migrate right through my house in fall.  I will only need to bird the Northeast to get Bicknell's not counting chasing of course.  I can fly west really easy, too.  IDK, we'll see.  I am beginning to miss South Dakota

I petted the dog at 1715 before she had to go to the kennel after finding out delayed flight for wife and daughter from Sioux Falls to Denver to join me a little.  United strikes again, I am flying out of Minneapolis...I leave at 1am to drive back in.

At 8pm, I take a bastu (sauna) in my Swedish room with my wife 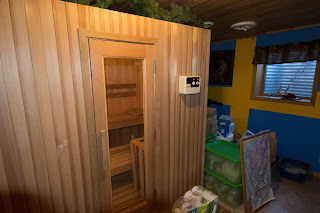 The room is being taken over by emergency food and water supplies since the treadmill broke. It is hard to store 9 mos of supplies.  I built the electric sauna from a kit in 2004 and is one of my prized possessions.  Saunas refresh and empower.   I drink a single Erlanger beer.

I work on a novel, Sjofn, the Goddess of Love, and go to sleep for two hours before the 4 hour drive to the airport.

So that is the exciting life I (we) lead as Big Year birders. I get champagne only on my 50th birthday and if I hit a really big number, no fancy meals, luxury hotels, and door to door chauffeurs...this is long, tiring, frustrating, and well why am I doing it?  Why really do anything?  I guess because I can. These were 2 bonus days and I was only here on these days because I had finished early in Miami and didn't have any birds to really get down there.  My scheduled Florida trip is still upcoming next month.  Two days to see wife, house, 2 bonus birds, 850 miles, two adult drinks, laundry, and my bed for a night. I did need to repack switching from Miami to snow in any event.


No time to reflect and relax as Chris Feeney's words haunt me..."More Birds!"