Olaf at the Battle of the Bulls 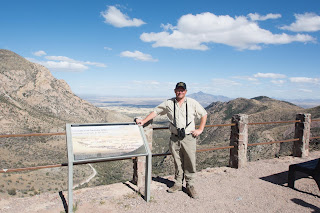 
I had been watching the reports of a rose-throated becard at a place I had never heard of called Cluff Ranch WA in extreme Southeastern Arizona with interest and when another snowstorm was coming into Denver and it was 6pm and I had a full tank of gas I thought, heck, what is 835 miles?

I drove all night except for a nap in the back of my car at some ghost town exit south of Albuquerque, waking up to a dream I was in a Tony Hillerman novel.  I even looked for odd Hopi art on my car, but alas only dust.  I arrived at sometime after 8am, Others were already there including another Big Year birder, Christian, Mr. The Birding Project and they had already seen the bird.

It then became a stakeout, for me to see the bird and them to see it better.  After a few calls, it was finally refound, but this is a wily little bird, fluttering in and out so quick, you blink....yea...you guessed it.  Poof!  It was going into a large cottonwood fully leafed out and that was making matters worse.  Finally, another fellow spotted it in the mesquites opposite and we all came running.  It was a grassquit esque look, quick but satisfying, Christian snapped a couple of photos, photos courtesy of The Birding Project, me...I was too busy watching to snap a photo. 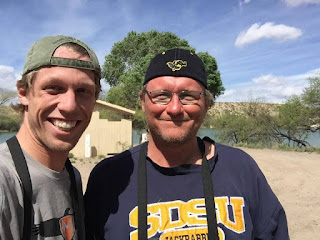 Noet that great facial sunburn courtesy of Colorado. It is more than a rosy glow 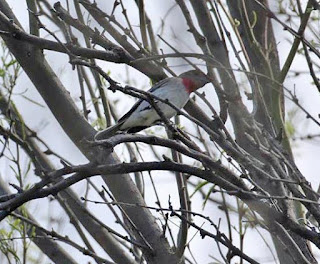 A dust storm was coming in so I decided to ride that out in The Chirachua Mountains south of here, rain, sleet, snow, waves, and now dust storms?  What more bad weather could I have...wait...I didn't print that.  I got a Mexican chickadee and migrating Pacific Slope flycatchers, and then I decided to stick a day and wait for Ramsey Canyon to open.  The tufted flycatcher was back.

You know, you see historical markers all over the place, most of the time I just drive past but sometimes...you read and learn 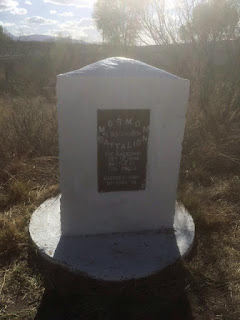 Now I understand memorials to Pearl Harbor, Bull Run, Appomattox (as that started today 151 years ago) etc. but the Battle of the Bulls?  What was that?  I read a book on the battles of the Mexican American war but...

It was 1846 and the US declared war on Mexico.  Why?  I guess why not, was the idea back then and I think there were two larger desires....G O L D and California, but well, that is another story.  A group of 550 Mormon soldiers enlist and become the first and only religiously dedicated unit in US Military History.  Fremont heads to California and General Kearney distrusts him so decides to send this column by the southern route to San Diego Mission.  They leave Council Bluffs IA and head to the Southwest.  In what would become their only encounter with the enemy (not counting engaging and capturing Fremont when he declares himself leader of California in 1947) at a ford in the San Pedro River between what is now Sierra Vista and Tombstone AZ.  Charleston Bridge is the name and the old one-lane bridge is also there as is the bed of the Old San Pedro and Southwestern Railroad.  It is a cool place. 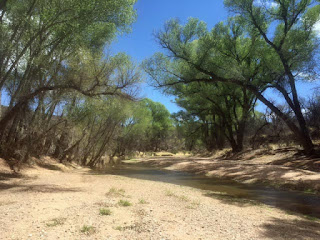 It was a crisp November morning in the desert.  Seeing the soldiers cross the river agitated the enemy  on the west bank, it must have made them feel like red meat, and hoofing it fast, they charged down the back on the right of the picture and rushed the US column.  Catching the American army somewhat asleep, the herd mentality of the charge initially caused some damage to the Morman unit, injuring two and killing a few of the mules and disabling many of the wagons.  Things were in disarray and the army was about to break ranks when the strong leadership took over.

The commander of the US forces decided to slaughter the enemy and ordered a counter offensive and made mince meat of their charge.  Killing between 11 and 15 of them before they retreated into the mesquite.....the American captured the west bank and victory was theirs, they even hoisted a flag to signify their big victory....the problem was the Mexican forces were entirely ......Cattle.

This area saw the Fight at the OK Coral, Geronimo's campaign, Pancho Villa sacking Columbus NM, and this...in what was to become a BBQ and yet it is commemorated by markers, service medals, and such.........Does the military need continuous glory even when there really isn't any?
This is worthy of a marker?  Should PETA put up one for the opposing forces?

When the forces came to Tucson the next week, obviously aware of the battle nearby the few admin officials retreated away, not wanting to be eaten themselves, apparently.

What did this Riparian paradise yield for me, charging cattle?

No, It had more Lucy's warblers than I had ever seen in one place. 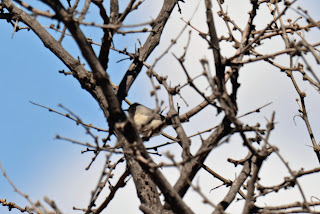 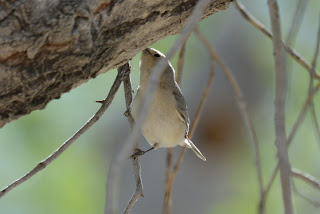 These are our smallest warblers and they have the highest nest density of any birds.  They also don't sit still.  I guess when they like a place, everyone wants the same place.

I also saw Plumbaceous Vireos, and violet-green swallows under the watchful eye of a resident gray hawk. 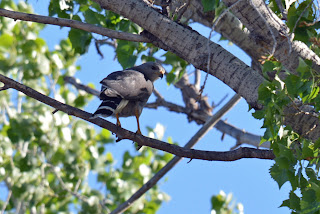 I tried to call owls in the evening, but all I called in was Rangers, and the police.  When the forth car came, I left. However, while I was being checked over for drugs and after showing the officers my owl calling device was not some way to signal the drug traffickers, we discussed the border.

You know, at the bottom of the Huachuca Mtns, the border fence running from El Paso ends 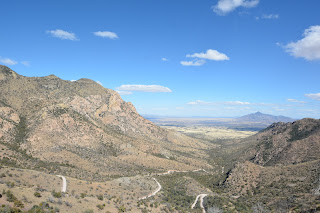 On the other side there is a five strand barb wire fence, which is essentially nothing. 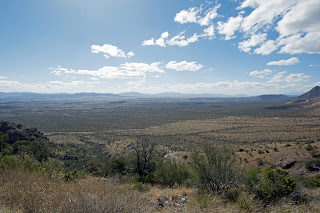 all the way to the Colorado River, hum!!!  where would you cross?  The fence itself is not complete, it has breaks for wildlife as they migrate, so I wonder, do other things like people migrate at these openings too?  I got into a little argument with some Californians up on Montezuma pass when I asked, how big should the fence be? ten feet, 20, 30?

I left the officers to their own waste of time and money, I was going to say it was the battle of the bull sh&^t when they were checking me over but I didn't now did I?

It was a great day though 10 new species of birds here and elsewhere, I think I'm now done with Carr Canyon road!!!!  I was going to say I am married to two things, my wife and Carr Canyon road as both take commitment that upon starting, you can't turn back, they are both windy, uphill and rough in spots, and well, there is always the unexpected, a rock or a tree down in the road, but when you are on top, it is bliss.  I don't think I want to say that.  I am not married to a road. 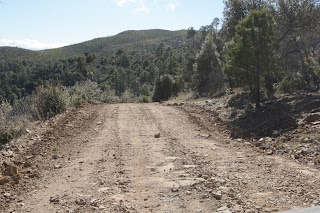 What kept me going was the thought that if Neil Hayward could make it up this road in a Corolla, I could in a SUV.  It had been graded, and some of the wicked flood diversion humps had been leveled but at the cliff where it is soft and has big rocks in it, there were bigger rocks and a tree in the road.  Luckily, I didn't meet anyone coming up or down.

On the 31st, after calling in my western screech owl in Carr canyon, Ramsey Canyon opened to a near fight.  People were waiting in line for one of the potential 23 parking spots, when someone was mistaken for a birder who was passing the line, angry words were spoken and it got real tense.  More battles of the BS.  I stayed out of it.  I got in and a space, but others after 8, there was no chance what-so-ever.  The problem ended up being the only small group that saw the Tufted flycatcher didn't tell anyone, I was maybe 100 feet away, and so word got around much later and by then the bird was a no show for the rest of the day, the Flame colored tanager put on a show but alas... that was an old been there done that bird.  It was even starting to sow and the weather looked worse coming in over the mountains, my wife needed me to call and so I left, I'll be back and the tufted will hopefully settle into a routine.

Somewhere on I-10 Western New Mexico

Some of the Birds 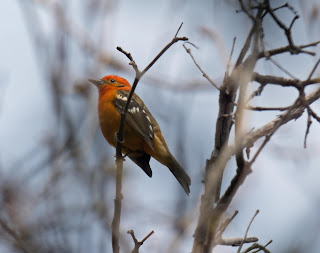 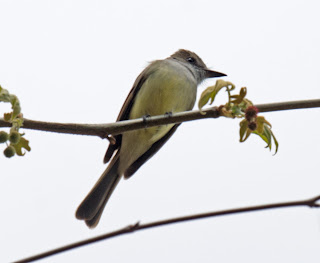 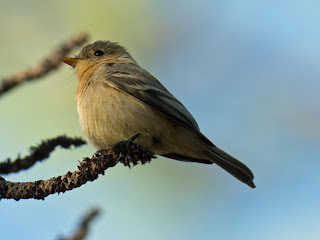 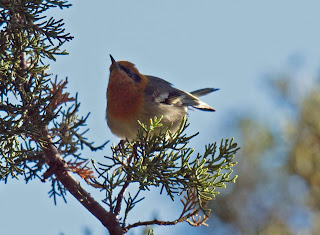 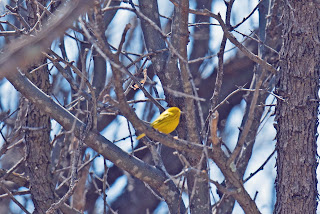 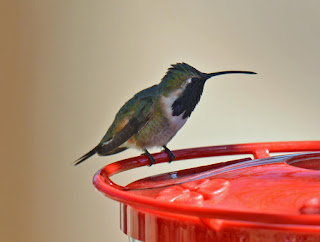 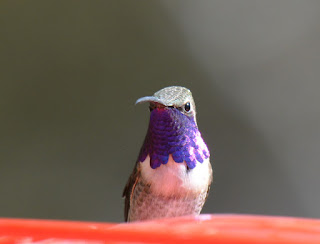 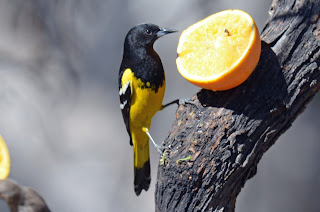 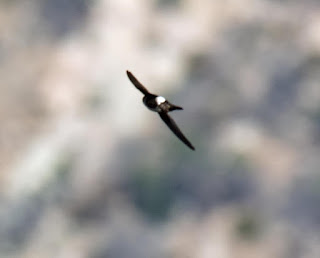 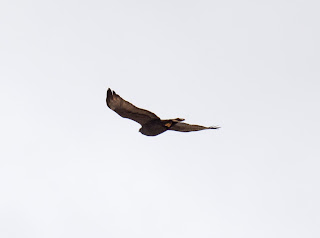 One quarter of this is over, 536 birds!!!  I think that is a good start, shrug.  It will be good to take a vacation for a bit before the big push starts.
Thank you all for your support and help.

Just like that epic Battle of the Bulls, I keep fighting this battle, just keep looking down so you don't step in any, well what the bull makes....I am still trying to answer the reason why?  Maybe in 1846, they were also asking why?