It is my hope that some adversity will make me stronger.  The good news is that I came to Connecticut and added my 47th state to my lifetime visit list, now only missing New Hampshire, Rhode Island, and South Carolina, the bad news is I seriously dipped out on the bird.  It was one of those monumental busts...

I sat above in the departure lobby in Montreal (pictured above) for a flight that I ended up being the only passenger....note to self--there is a reason no one else is going to Hartford..maybe you shouldn't go either.  It was a very small Beechcraft 1700D and I did get here alive but well....

It was long and a hard stakeout at Fisher Meadows in Avon, CT.  I came, I didn't see, and I was conquered.  All this, despite the best efforts of Mark Danforth, the man who found the goose originally.  It was also in spite of  Darlene Moore, who had been reporting it nearly daily and took me under her wing, even feeding me and putting me up after I got stubborn and stayed an extra day when I should of bugged out.  It was also despite it being reported just 3 hours before I got here.

I had expected a quick in and out, be home for dinner almost, but the bird didn't cooperate.  I think the bird was coming in the first night with a lone snow goose and two pairs of Canada's in low light but it didn't stop and kept flying north right by its nightly hangout...why?  IDK, the geese seemed to change their patterns the second day and despite a search of the whole region and sorting thousands of Canadas ...........no dice.

Some dip outs don't bug you but this one did.  I don't like to feel defeated and today when I made a last ditch effort to see the bird I ran into a man from Ohio who recognized me and to be honest, that gave me a boost.  He knew Jay Lehman, big year birder and knew of me and has followed this....you know that is what this is all about, people saying hey, god job!  Thanks!

Birders came and went and one thing was constant, no goose.

I got excited when 500 geese came in yesterday and one was different... 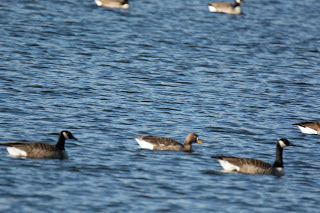 My excitement waned when the bird turned showing me it's white face--greater white-fronted goose...the only reported one here in months.

I was somewhat happy to have noted the American woodcock returning and hearing their peent, which gave me bird #475 and saved me a early 50 mile trek to get one in Wisconsin but it wasn't much of a consolation prize.

Both John and Debbie S. from St Martin took in this wayward traveler (Debbie has taken me down in the islands under her wing before) and so did Darlene Moore, a woman I hadn't met before....thanks much for your warm hospitality.  I appreciate your kindness.  I don;t think I'm worth it, but well...this is depression talking, I'll perk up when a good bird is nabbed.

I wish I could have something witty to say, but I'm worn out with this stakeout and I don't want to sort geese for a while.  Yes, they are just fascinating to watch land, and I did watch it for days but well maybe I'll appreciate my time in Connecticut more in retrospect.  Anything in excess is tiring...

I tried to standby a flight to get out early but alas NO, last man not on the plane.  I sit here waiting for a call from any birder that they have found the bird but alas, the phone isn't ringing.  I'm better off because it will go before I can get there anyhow and I'll miss the last flight out which I am on.

I worry that this bird will become my new nemesis...I have issues with pink....I am trying everything, a new hat, a new shirt, I played Ex's and Oh's in the woods yesterday....I just hope the Pink Nemesis hasn't reincarnated as a goose...a %^& pink-footed goose.   There is a story about this goose costing me in the past...a business deal in New York....but I won't have any of this talk....I just won't have a new nemesis...NO!

Hope and patience is the only things us birders have some days and if my hope fades and I become inpatient, this will evolve into a VERY long year.  Maybe that is what I will get out of this dip out is a new perspective on all of this....in that I find something I can truly hope for.

Thanks again to everyone in this fine state, I apologize for avoiding it for 49.96 years...gosh I'm almost 50, maybe that is why I feel so down...birthdays suck.