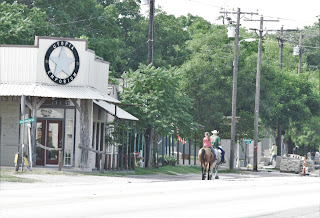 Utopia Texas is sort of a cross between the movie Tin Cup and the Andy Griffith Show.  It is both rural, quirky, and in the end it was just what Olaf needed.  The place came complete with horses walking down main street, above.... 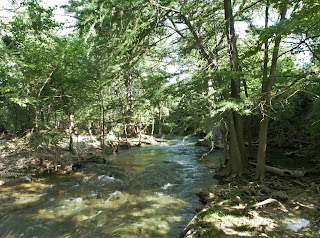 and even like the movie Tin Cup....an armadillo is seen foraging in the front yard of the lodge I stayed at. 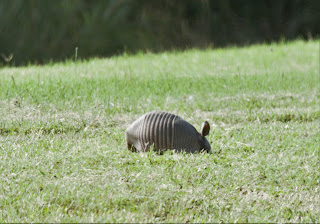 It also had that weird Juxtaposition in time....Olaf style, stuff one can't make up.
What are the odds of me tying a great Big Year birder, John Vanderpoel and having a sign telling me this literally seen from the front of the lodge I stayed at.  I'll let the sign say it. 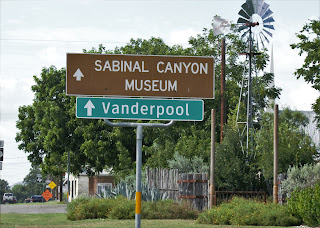 Now there is a slight spelling issue on the Texas sign but let us just give that one a pass.  Now I have never met John Vanderpoel or Sandy Komito, but along with Neil Hayward are undoubtedly better human beings and members of the birding community than I am, and to be mentioned in the same company as they are, for me, is truly undeserved.  It is just that I have this very good plan, many doubted, but it is a good big year plan.  I am also spending well under six figures (unlike some who are way over six fugures) rarely using guides (except where required and a couple of times in Arizona for the company and to go down a road I don't like) and I will see a lot more birds this year before this is all thru and even better, I am getting some of the most wonderful stories.

I had other reasons to be in Texas.  I had a business partner die in Corpus Christi, partner being a strong word, I owned 5% of something he owned 25% and managed.  He was one of those people you want to go to the funeral to make sure the deceased is really dead.  The man apparently never paid any bills (despite me paying him my share) or for that mater seemed to settle any disputes.  In fact, I was notified by an additional problem by a lawyer representing another "partner" texting me at the funeral, he was there also apparently making sure the man was dead. But that is business and this is a birding blog....

More importantly, Utopia and the Sabinal River Lodge had something else....the green violetear.  One of the most striking hummingbirds occasionally found in North America with its dark green body, dark tail, and blue patches on the side of its face.  Well maybe the white-eared is more striking...but well...that was the last bird....

The bird was first reported in later May, I think on the 19th by Cindy Sperry, although that is a little vague. 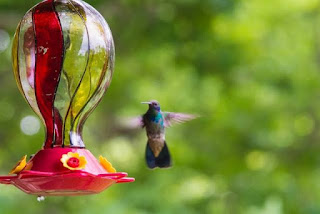 She was at this lodge when it was photographed and that posed a bit of a problem for bird chasers.  Then it was not reported again until June 10th. It was missed on the 17th but as far I as I know those were the only visits by the birding public to this location.  After being there and thinking about it now, I think this bird comes in very early and very late and maybe once in the middle of the day.  But that is just my opinion based on very little evidence.

The problem again...the very nice proprietor Sandy does NOT let on random birders as the location of her many feeders does not lend itself at all to that and would really interfere with here guests.  There is no place to publically view her feeders.  Maybe someone can offer a thousand bucks and she would reconsider but in the end all you are doing would be to ruin it for the rest of us. She is not a birder and sort of looks at her hummers but isn't like the rest of us to have to ID every bird.  So you need to stay here to get a shot at seeing the bird.  The first openings that fit my schedule were the last two days.

Unlike some hummers as far as I can tell, the two sexes look pretty similar. This particular violetear is a little uglier than most, with more gray on the abdomen than in most of the pictures and of the bird I remember seeing and what I have seen of this species. This didn't make my life any easier at the lodge.  I have seen the green violetear before, in Belize 20 years ago on a trip that involved, a kidney stone, destroying a car, burying a car in jungle, toucans, going off on foot, more toucans, ending up between a rebel and a pretty much non-existent army, being rescued by Francis Ford Cuppola and the man that handed me my college diploma (weirdest coincidence ever), and finding ourselves on a private tour of Carachol Archaeology site.  It was an adventure worthy of an anecdote as we lived to tell about it.  I got three life birds on that day, the violetear was one of them, but I digress.

This bird is a bit nomadic and is not that uncommon in Texas, and has also been seen even as far north as Ontario, but this so far in 2016...it is the only one reported.

After arriving from Utah, I cruised in and set up shop at the porch.  Wine in hand ready for a hummer stakeout 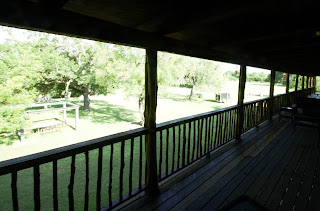 There is another problem with viewing hummingbirds here as you can see.  The area is heavily back-lit.  She has 5 hummingbird feeders and an estimated 25-30 black chinned hummingbirds, there could have been 50, it was very busy at her feeders, most of the time too busy.  I was by myself and what I had learned of the hummer, it came in and out and that was it.

Even being careful, the black chinned hummers can look large and dark and be mistaken for the violetear.  Here is one picture..it made me do a double take. 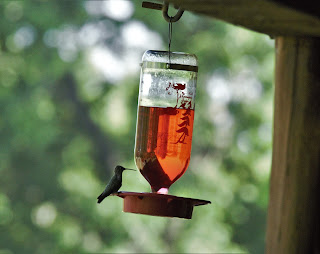 It was a long stakeout.  I spent hours upon hours watching feeders and the birds tended to like the feeders farthest from me. The first night I was pretty sure I heard the bird about an hour before dusk, but pretty sure does not cut it.  Then a little later there was a dark big hummer at the far feeder but all I got was tail, I stood and I spooked it...gone in a noisy chirp.  These are noisy hummers but with cicadas and noisy titmice, hearing is tough at times.  FWIW.  It was a big hummer with dark tail but well....it was frustrating.

I decided something odd for the next day.  I drove out early for the LRGV and the National Butterfly Center to search for a yellow-green vireo at opening, well and I needed to check on my gas well interest down there, again the same dead dude involved...there was some trouble maker floating around causing a scene at the hotel in Corpus, demanding money from this guy and I wanted to make sure what I owned 5% in was still okay.  NABA was buggy, there were few birders.  I got great local intel and staked the place out in sweltering heat for 4 hours.  I'm pretty sure I heard the bird twice and then a bird by its MO flew from it's favorite tree but got sucked into the forest there...again pretty sure was not good enough.  It could have been a red-eyed vireo...for that matter even a Yucatan vireo, IDK, by noon sufficiently melted I headed back to the Hill County, feeling the whole project was hopeless.  No one else saw anything except butterflies...

The lodge called me back like a siren.  I set up a vigil and made a mistake... 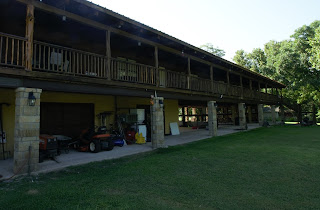 Again, the gang of black-chinned buzzed the feeders.  I drank some wine (the mistake) and fell asleep.  A noise woke me up, I got this picture..... 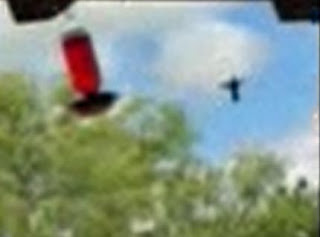 Hum...or hummer, sheez or sh4t.  I slapped myself awake.  I was really awake after that, I would have gone and made coffee but I couldn't leave, not now....in fact I was so wound well into the night and I was out of strong drink, that I probably needed to fall asleep.  A note:  Utopia is in a dry municipality so no late night run to the liquor barn for my Lone Star Beer.

I had had a nice long talk with the owner of the lodge in the morning.  I had left the AC on and in general, I felt I was a bad guest.  I was tired and luck wasn't helping me.  There were children playing in the river, and there I sat feeling like a stalker of children with a big camera.  I was embarrassed.  I wasn't sure I wanted to fess up whether I should tell her my observation that the bird was still there.  I decided to talk about my writing.  She looked very bothered by an earlier talk all of us birders calling her and in fact on NARBA and TEX Rare birds, that is warned as something to avoid.  In fact, I think it delayed my confirmation of this place.

The lady left to take her husband for an appointment and well there was a violetear around.  I had two more hours to see the bird again and well I was not disappointed, this was not named Utopia for nothing. It always amazes me how hummers get more active around lunch time...hint hint.  It was a long tiring stakeout but one only gets to Utopia once.....

some of the other birds of this trip 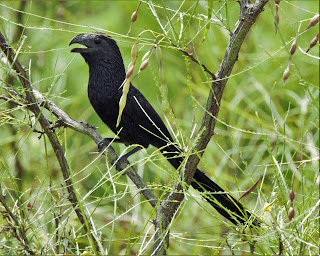 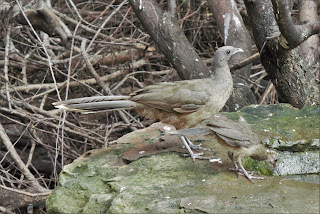 In the end, I ticked one more bird to 743, tying John Vanderpoel, whom I deeply and sincerely apologize to in any way diminishing his mighty effort in 2011, marred IMHO, by the whole hooded crane fiasco of that fall, a bird he should have been able to count.

In the end, I have one less person on my contact list although I'm still getting emails from him (secretary?) which is really odd.  I missed a code three bird.    I have now dipped out twice on a yellow-green vireo but they show up.  I could keep this place a secret but well, that isn't my style.   Maybe other big year birders could get a room here too...?.  Sandy needs the money.  Sorry Christian, no car camping here.

My costs of this trip were odd.  Again, Delta flight to Minneapolis 779, to Phoenix thru Minneapolis, $239.  I had my backpacking gear to check so I stopped at UPS store and mailed it home for $118.  Saving 425 bucks or so, was too much to not give up.

That marks the end of this phase of my year plans.  I promised my wife I'd be home to throw her a 50th birthday party and well, just like my wedding I did last July, I expect a huge crowd.  No mass baptism though...no vows, just a celebration of the next half century for my wonderful Silja.  Maybe I'd be back to Texas and maybe soon.  As I said before, that now is the second time I've dipped on that vireo,  and missed it by less than a day...but well, I know, I can't get every bird.