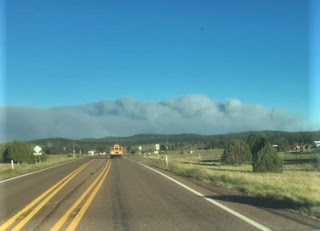 Fire!  Don't yell this in a movie theater but if it is coming over the mountain at you, yell it and run! Well, I'd be too stubborn to run, like this time.   Of all the stuff the birding gods have thrown at me, fog, ice, snow, wind, rain, they had skipped one, but not now.  On June 16th 2016, I ran smack dab into a forest fire....the 12,000 acre at the time of this writing Cedar Creek Fire near Show Low, AZ, problem is this is where I'm birding....gosh I forgot to plan for fire season....the bus ahead of me BTW was carrying a fire crew in from farther west.  How was this going to go?

The Pine Flycatcher or Empidonax affinis is a bird of lore.  The name means "related to" empids, and it is a poorly understood bird that typically resides well south of the US/ Mexican border but in an area of drug trafficing...who is really researching it.   In 2008-9 an individual from this difficult to identify family showed up in Choke Canyon, TX, and was initially thought to be a pine, and many came and ticked a bird that was ultimately identified as a least flycatcher, the commonest of the lot.

Well when I was in Alaska, word of this bird and an ID by the expert in this family confirrmed, a true rarity was in ABAdom.  It looked as though it was moving in, building a nest, so I waited until the prospects looked perfect for something more.  After, Maine, I flew in to Phoenix and rented a car.  Now I was orginally going to hitch a ride from a non-birding guide who was trasporting people up what has been caled the worst road in Arizona, and I would tend to agree, it is bad, really bad.  High clearance...at least.  But this man said his car was fuul, the had an opening, then full again, so I didn't really even know if i had a spot so Hertz helped me out. first, it turned out, my rental was in Boston.  The computer glitched.  Then my Carolla was out of stock so the guy said, well, we'll upgrade u to a ...Tahoe.....yea, big, 4WD, and I took it as an omen.

I slept in the boot of the SUV but under an elf owl, it was a long short night on the side of Arizona hwy 83.  I got up at first light and drove to the head of the road and who do I see standing along the road but Liz Southworth from Boston, she was on my flight back from Alaska.  I stopped.  Then Laurens Halsey came by to pick her up, I got invited along and well, misery and birders love company so in I hopped, besides, I wasn't sure where this bird was.

We got to the end of the road, I put my lungs and gut back in my body and out we went and found the cute little bird.....first one in the ABA.. 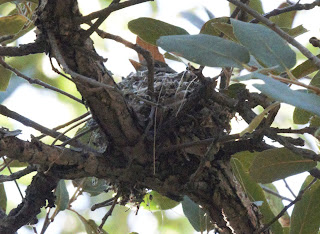 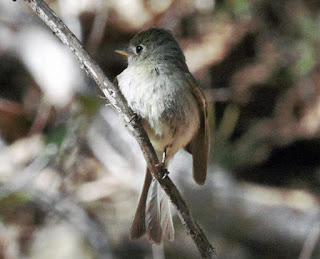 There had been an Aztec Thrush seen here a couple of days ago but none today.  We looked and scoured.  I watched a rufous capped sparrow and by 8 we were out of there.  The only bad news is i lost a screw in my glasses and I was subjugated to using only sunglasses or being unable to read.

After visiting an optometrist office in Green Valley I was back on the road and driving up to Phoenix not thinking.  I ended up in a Barnes and Noble before I decided what to do.  It was then I realized that where I needed to go for the only two birds in the state, I needed was closer to Tucson and so I had driven 150 miles the wrong way.  I then stubbornly ignored my Siri and drive to Camp Verde then east to avoid the traffic again in the big city of Phoenix

It was shortly afterwards that I saw the smoke....It looked to be just where I was heading....dang.  Then I stopped and looked it up.  Evacuation orders....double dang.  Then a busload of firefighters passed me....triple dang.  I was pooped and I went to a hotel to sleep but the knock on the door could come at any moment I was warned by the night person...

I decided to eat a final ...maybe a final meal,...gulp 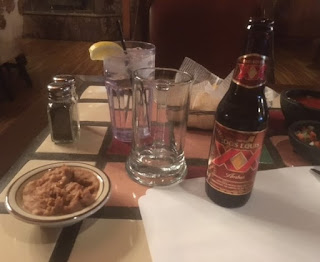 I guess this a provisional lifer beer....can I drink another when it is added to the checklist?  I need a ruling.

I was up in the white mountains at first light having drove around the fire to get to my goal spot from the east.  I had told my wife my exact location in case i got trapped but i was too stubborn to just go somewhere else, actually there wasn't anyplace else for these two birds.  The dusky grouse is rare in Arizona and the other bird I needed, a sapsucker was also scarce.

I avoided the elk all over the road and still no fire over here so I climbed up a mountain and hiked around.  It took a while for me to see anything after seeing an initial northern pygmy owl.  I can never photo that bird and then I wasted time taking shots of mountain bluebirds 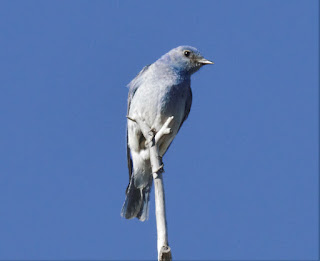 The I heard a tap, a woodpecker tap, I sat down and tried to wait out the woodpecker.  Sapsuckers can be fickle, then it gave itself away and I stood, it flushed as did a second one.  I ran after them and I got a photo, I beat this one, sneakking sapsucker.  I have never photographed a red-naped previsouly buggers...no more.  ha!  Score one for me. 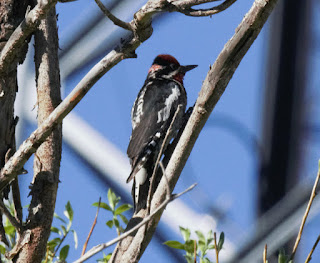 The testosterone was flowing on the mountainside a bit later as I ran into a fire tower spotter, totting up two weeks supply of water up her tower basically to lock herself in in case the fire was coming her way as she said, no one was coming up to evacuate her.  She had a lot of testosterone carrying up maybe a thousand pounds of stuff up a couple hundred feet.  She parked her old truck in a corner so that when the gas tanks blew, it would not damage her tower.  23 years of experience, I guess.  She worried about the big white Tahoe nearby until I admitted it was mine.  My tahoe was close enough that the blast could affect her tower.  She was relieved that I was only looking for a bird and would leave shortly.  To hurry me up, she gave me some help.  Run the powerline clearing.

I did and shortly I found more testosterone, this time the hormone was raging inside a large grouse, displaying up in a tree.  What a show! 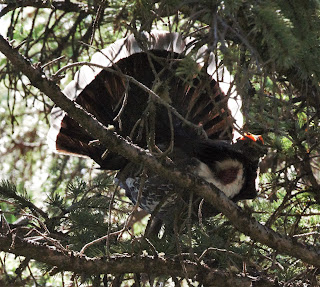 It was a great scene, and I watched for an hour.  He made sounds I could barely hear, low and spooky, in the hopes of attracting a hen.  None came, and eventually I climbed back up the mountain and got in the car, notifying Silja that I was leaving.  I told her where I was going in case, the fire got me.  I hope the big boy in the tree will be okay but I needed to leave.

I drove back down the 83 erosion protection mounds into the valley.  The lady had counted them in the tower and she gave that "Get the F out of here" look when I started down.  I was... 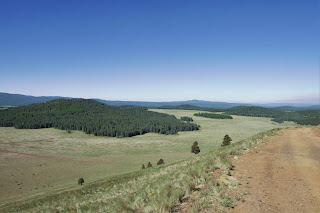 The view away from the fire is gorgeous but as you can see, hit a mogul wrong and the trip down will be very quick.

Show Low had not been evacuated as I drove back in but they were under a pre-evacuation orders still.  The town was very smoky and in the end, I sort of felt like I had been in a barbecue--literally in it, slowly smoldering.  Everything I owned now smelled like a campfire, a huge campfire.

The forest service was bringing evacuees into my hotel as I write this blog and am wasting more time thinking of where to go next.  I have a scheme, I'm bugging out of here before I get burnt up both due to the 115 degree heat expect in the valley and the dang fire.   Another busload of fire fighters are coming in the valley....got to go, I need to get the fire out of here..........before I become a burquet, a piece of charcoal named Olaf.

I wonder if I'd be the quick lighting kind?