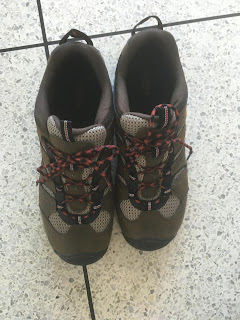 Forest Gump once said "Mama said they'd take me anywhere.  She said they was my magic shoes...."

I was told by a non-birding friend yesterday as I was taking a much needed 23 hour R&R to take a 5 hour nap, reconnect with my sweetie, do laundry, buy a new pair of shoes, and do logistics on next phase, "that I must be having the “time of my life.”  I could be, I am thinking, if I actually looked at this year a bit differently and treated each as a challenge and an opportunity for seeing cool things and new places other than an opportunity for defeat.  You know, only four people (one twice) have seen as many birds in a year than I have.  I am doing something few have tried but many have thought about.

Today on a plane in O'Hare I saw a huge guy wearing am even bigger t-shirt.  It read  "The most dumba$$ things I do make the best stories later."  You know... maybe that is a motto for me?


Rested and ready to go....this dumba$$ headed east and now with a story to tell.

Well I flew into Rochester NY and rented a car and soon was cruising out the Hertz lot.  Lately, I have been renting the "manager's special."  Today it was for $17 bucks and change.  Sometimes I get a nice car, once in Miami, I got a Pickup, another time a van, but today, I got an Accent for Hundai.  What?  It isn't even a real car just an accent?  I guess it was okay, it was lawn mower with wheels but it WAS cheap. It is like my new game. I guess.  I cherished it, like I did New York, a state I have never before birded. 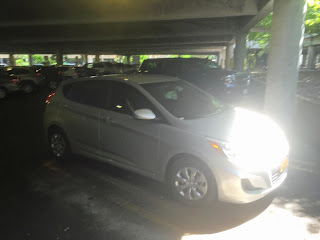 I drove up to Montezuma NWR near Seneca Falls NY, a town believed to be the model for Bedford Falls in Its a wonderful life, movie and the home of the NY College of Chiropractors.  I guess everyone on the little town has a good back....IDK?   The refuge named after a local doctor 115 years ago that thought the area looked like Mexico City...I kid you not.

I found the stakeout spot for the garganey seen here on East Rd and pulled up to a line of people on their scopes. 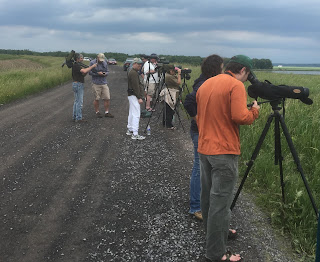 Immediately a familiar face poked out and said "hi."  It was Mark Danforth from Connecticut and the ill-fated pink footed goose stakeout in February.  Him and a friend whose name alludes me were over here to see the duck and had seen it a couple hours before being scattered to cars by lightning, the bird heading up a channel and out of sight.  The perils of stakeouts. This is not a real good-looking opportunity as with the grass and water and distance just identifying the bird is priority one, not photography.

Well, I saddled up and set up and watched the grass for the bird.  This reminded me of my second go round for this bird in 2014 at Crex in Wisconsin although hot today, that was a cold one.  The last rare bird stake out with my grandmother.  All told, I have seen this species five times and two birds, once a eclipse plumage bird in Alaska.

The bird didn't show and then a guy named Tim Osborn from Vermont came up and started talking.  he was doing a survey of the refuge.  After two hours the two guys from CT decided to go and then so did Mr. Osborn.  Not a minute later someone down the line yelled.  "Got it!"

We readjusted and I looked through his scope and saw the male head of the garganey poke out of the grass, its white stripe over its eye gleaming in the sun.  Then I found it, lost it, found it in my own scope and helped everyone near me see it.  It wasn't easy.  Mr Osborn hadn't left and walked fast back and looked through my scope at the bird and then left for real and finally as I found the bird for an older woman next to me all 40 or fifty birders present saw it and then...it disappeared into the weeds....garganeys.

Having no picture of the bird, I had a picture of me taken with others looking at the bird. 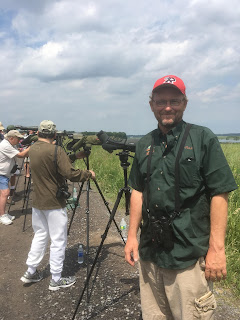 I got it, everyone did when I was there and after a while I just left to prepare for the next location, flights left tonight for points known and birds needed.

When thinking of where I am, I need to remember, I have a pretty, no, very sound plan.  I need to let it work and stop worrying about it and everyone else.  I have taken a bit of a chance on this Alaska strategy and it paid off.  I have only found myself out of birding position twice, one I fought back from on the Eastern seaboard in early May and the other, an April fiasco, well, it didn’t kill me, I guess.  You may not think so, but I now need to get serious about this year.

I like being home, sleeping in my bed, patting my dog, I love my wife, I like seeing my kids, and I hate birding alone, BUT, it is hard enough just moving me around.  I’m not only trying to fit in birds, but trying to fit in an aging grandmother, three children, and other’s, has cost me here and there and if I am going to get anywhere wit this, I need to get a move on.  I do not think many appreciate the sacrifices and the brutal nature of this.

The next days are crucial, I guess they all are.  I plan to just pound the pavement, the airports, and the bird blinds. I don’t think I can push my number much over 740 this next week but I will try to clean up all the missing birds to my checklist in this period that are found now in the lower 48 states.  I have resupplied, regrouped and now refocused and it took me less than a day.  I have laid the groundwork for something and where it ends up, where these new 'magic' shoes take me...I don’t know, and I don’t know if my efforts will be good enough but what the heck, they will be good enough for me and it can’t be any more brutal than the first 6 months and heck…this could even be fun!

Garganey gotten, thanks Mark...you missed the second coming by 20 minutes