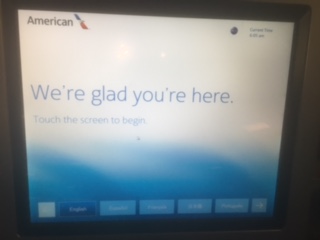 Their logo is "We are glad you're here"  That I'm certain, they do NOT believe.  I don't believe it

Truth be told, 10-15 years ago, I liked American.  They flew me and my family all around the Caribbean, had a professional staff, and generally were the airline to fly....I used to belittle United and say when in doubt do NOT fly United.  I'm a half a million miler on Delta as from their Northwest roots, and Minneapolis hub but American was the airline to fly....but no more, never again .

Let me say it here.  I will never fly this airline again, EVEN and I repeat EVEN if it is from rescheduling on a cancelled United Texas flight.  The airline is not safe, they are NOT professional, they are NOT reliable, and to be honest, some businesses like Eastern, Ozark, etc etc, just need to go away.  TWA and PanAM fought for 50 years to be the monopoly airline and where are they now?  Where is Bethlehem Steel?  The Rock Island Railroad, MCI...Dead, gone, buried.  In many cases, thankfully.

My day started yesterday with a cat funeral, Nightmare kitty, a family pet for 11 years needed to be put down (such a way to say it).  After a Glenlivet in her honor, I dug a grave on the ranch.  Animals need to be part of the land they roamed.  We have a family tradition of pet funerals that maybe border on the pagan, but I don;t care.  It helps us.  We can argue the pros and cons theologically of whether animals have souls and I have with my very well read family, but let me leave that for a different time.  I'd give you a picture of her but I don't have one on this computer, she was a black torti shorthair....I had a similar kitty as a kid named Uglikitty.  Allwin picked her out at a farm overrun with kittens up the road in 2005 with our exchange student at the time from Norway, Ingvild along with two others, Whiskers and Grey, Whiskers didn't figure out the road and Grey still roams my house.

I had an odd feeling of doubt as to what to do on my travels to Monterrey today and a Debi pelagic. The cheapest flight was from Bismarck (5 hours away) through Minneapolis, but to San Jose the most direct, American from Minneapolis through Phoenix, Delta doesn't do Monterrey and well, I had to leave late to bury the cat and build a stone cairn.  I laid in my bed and plead my dilemma to a not understanding wife and finally I held my nose and  I chose American, took the miles on Alaska and went to bed on Wednesday.

It went okay until we backed out of the gate at Minneapolis.  A maintenance guy was trying to attach a piece of duct tape in the back galley of the 737.  It made us 15 minutes late, then we got out of order to take off, and were 12th in line.  It took 30 minutes to take off.  I cannot ever remember such a delay in Minneapolis is perfect weather.

The stewardess forgot about us in rows 28-30 before we were descending. I got my soda just before we had to give them back to land, BUT we didn't just land we had to circle Phoenix a bit to make us late and then due to construction we had to wait to get a gate.

The same stewardess pleaded for the 67 who had tight connections like me to allow us to go first, those so in front of the plane got out but then a high school kid (was in Minneapolis for the Junior Golf tourney, I had heard earlier, Tiger Woods in the making??) he stood and blocked the aisle, looked clueless and then everyone got up.  For the first time in my life on a plane me and a guy just in front of me shouted at the people in the aisle.  He finally, walked up to the kid and said, "Get out of my F^&%% way you little..." and gave him a push to the side and I followed in his wake.  The run from A8 to B19 is surprisingly far in Phoenix and I went into excercise induced asthma somewhere near the turn for the lower B gates.  I was having chest pain by the time I got to B19 as they were making the final call.  If I would have just passed out, everything would have strangely worked out.

I got on the plane, left my suitcase outside as they said they had no room....they closed the door in my wake, and I took my seat.  Then a minute later, they reopened the door, I could here the bridge being replaced.  "We are over loaded so we need to offer for two of you to not go on tonight's flight."  The captain said.  There was a moan.  Then they announced the rear bathroom was broken.  Another moan.

Well, then I saw my suitcase come aboard, then then two stewards opened the overhead and began along with the captain and co-pilot a laborious project of filling overheads with 21 pieces of luggage left outside for gate check.  I have never seen such a thing.  They put suitcases under seats, in closets, and I even think they put one in the closed bathroom.  "Weight load now checks out."  So they closed the door again.....It took us 40 minutes to get out of the gate and through a construction project

Well we were off and I finally could breath easy (literally and figuratively) as we flew over Barstow then to the coast.  We descended, and heard the weather for Monterrey, 10 mile vis, 55 degrees, landing in 15 minutes.  I could see the lights of Monterrey and Carmel and then, the plane began to climb and without so much as even a second look--diverted to Phoenix.....Phoenix? Why not San Jose as we flew over San Jose and then Fresno and Bakersfield airports.  There was some continuing turmoil in the first class bathroom as that was the only one and as the 1.5 hour flight became four, and they ran out of bathroom water over Bakersfield. They ran out of alcohol over Riverside and that may have been a good thing or a bad thing, depends.  The anger grew.  People were talking behind me that at least going to Phoenix would leave teams of American reps to help them, I knew that would not be the case...I thought it would be lucky if they even had a gate for the plane.

We landed at midnight, the Steward gave the stock landing speech about welcome to Phoenix and if this is your final destination or wherever your travels bring you speech.   There were jeers like I have never ever heard on an airplane.  One guy up front bordered on causing the FBI to show up.  We had to of course wait for a gate, 30 minutes as the midnight construction started as no planes come to the B gates at night....The captain did not greet us, there was no one from American to help advise us, we as they say were on our own, as there was a stack of phone numbers for a hotel and American customer service.  Old people were crying as they didn't know what to do or where to go.  It was bad....being abandoned by an airline is always really bad.

Then as all the gate checked luggage was somewhere on the plane (I had seen where mine got put so I grabbed it on way out) and nobody knew where, I had thought that the crew would help locate it but they sort of made themselves scarce and there was mass yelling and pandemonium as they apparently forgot about it and how in got into the airplane saying gate checked luggage would be delivered to gate.  Were they that stupid to forget that 30 minutes?  As I grabbed the phone numbers I could hear some serious anger from the jet bridge.
I was too tired to care.

It was 7 hours of flight to go nowhere....I got a $70 room at the Sleep Inn to go with my non-refundable room for $250 in Monterey, my $169 dollar trip on Debi's boat and my non-refundable Hertz fare.  This is not to mention my cost of my ticket.  I finally got through at 2am to American, who told me the next seat to Monterey was Tuesday........Tuesday?

I didn't care as I could have driven all night to The jetty in Monterrey from any airport in California, EXCEPT not Phoenix.  I would miss the boat.  I emailed her as I couldn't do anything else, I didn't want to be banned forever.  I told the woman at American on the phone, I just wanted to go home and she booked the flight back.  a 4400 mile circle, but American wasn't done with me yet.

I tried to check in at 6am at the airport, they had no record of my flight.  I got in the line and literally let out my frustration as I had an email with the flight.  Someone at 4am you see had cancelled me and put me on a San Francisco flight on Sunday.......WTF!!!

I got my seat back, was placed in zone 4 and when they said I couldn't board with zone 2 people (as I didn't want my camera checked) I just put my ticket over the scanner and said.  "I'm with all of them."  Pointing to the people in front of me.

If I had just walked to the gate in PHX, I would have missed the flight but made the boat (I would have been put on a San Jose flight).  what is up is down, and what is down...up.  The flight today to Sacramento someone booked on last night to get home, cancelled due to lack of a crew...another to Glendale and one to Long Beach...same thing.....American...you are not making any friends....save us all the trouble and just shut down.